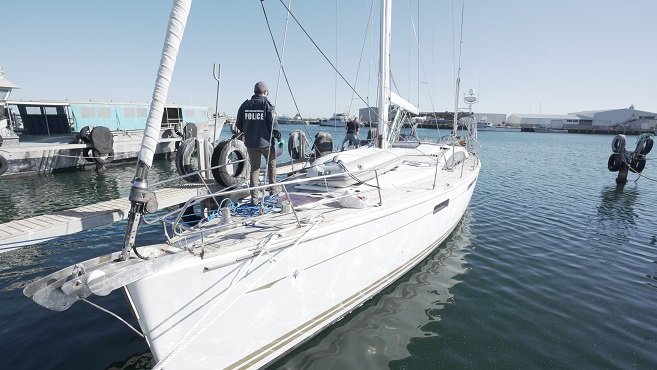 Images of Yacht Zero courtesy of WA Police Force and the Official Trustee.

A $560,000 yacht allegedly used in a foiled attempt to import almost 1 tonne of illicit drugs into Western Australia is set to go under the hammer.

The 17-metre yacht has subsequently been subject to Commonwealth confiscation laws by the Australian Federal Police and will be auctioned next month (December) by the Official Trustee in Bankruptcy (Official Trustee).

The investigation identified the vessel was involved in the transportation of around 900 kilograms of cocaine, MDMA and methamphetamine, which were found on Burton Island, in the Abrolhos Islands group about 60km west of Geraldton, on 3 September 2019.

Operation Shipton Budgee seized the vessel under the Customs Act (1901) and the investigation resulted in the arrest of five men on serious drugs charges.

The Official Trustee has launched an online auction for the yacht but prospective buyers can view the vessel in Geraldton on 30 November and 1 December, before bidding closes on 10 December.

The vessel sustained some damage when the skipper failed to navigate the WA coastline and struck a reef – sparking the sea search that resulted in the unravelling of the alleged drug smuggling enterprise.

AFP Criminal Assets Confiscation Taskforce (CACT) National Co-ordinator, Detective Superintendent Kate Ferry, said the seizure of the yacht was thanks to the co-ordinated efforts of a number of law enforcement agencies.

“The AFP, Australian Border Force, WA Police Force, Department of Home Affairs, Australian Criminal Intelligence Commission and AUSTRAC have all played a crucial role in this outcome,” she said.

“Disrupting the movement of illicit drugs and seizing significant assets, including this yacht, remains a key focus for our investigations.

“Our message to organised crime groups in Australia and abroad is clear – the AFP and its partners will continue to target and investigate your illegal operations, while prosecuting you with the full force of the law.

“While the yacht may not be in a pristine condition, its purchase will give the new owner an interesting tale to tell.”

WA Police Force Commander State Crime Allan Adams said the seizure of the yacht by the AFP was an important step in the law enforcement process.

“Seizing assets linked to the distribution of harmful illicit drugs in our community is as important as seizing the drugs themselves,” Commander Adams said.

“Targeting assets held and used by established criminal networks, in particular those that could be used in future illicit drug trafficking activities, assists with the continual detection and disruption activities being undertaken by State and Commonwealth law enforcement agencies.

“It is pleasing to see the state and national law enforcement partnerships working in the best interests of the community – from the initial seizure of the drugs by WA Police Force, through to the Commonwealth charges and subsequent asset seizure.”

The five men arrested are next due to face Perth Magistrates Court on 17 January 2020, on a variety of Commonwealth and State drugs charges carrying penalties ranging from 20 years to life imprisonment.

Video of the yacht can be accessed here: https://spaces.hightail.com/receive/odKxsAk7Xh

Video of the underwater inspection of SY Zero, courtesy of the Official Trustee, is available at: https://youtu.be/19Z42ErAPWg