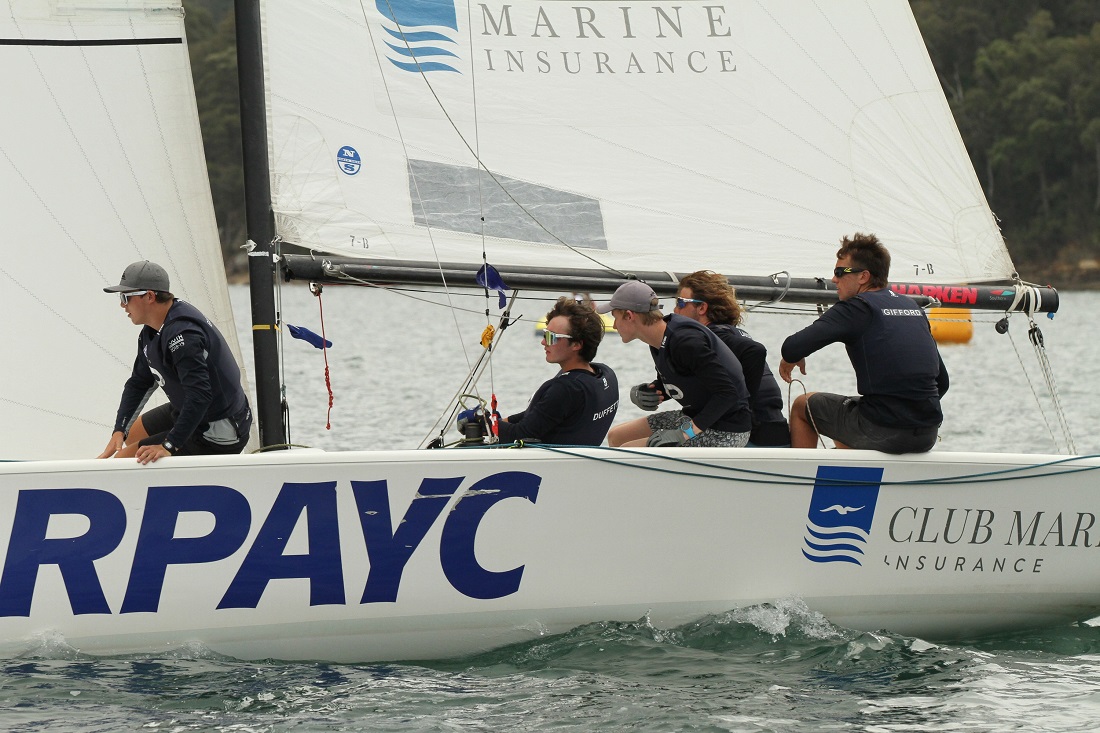 In the final, Gifford’s team of Henry Angus, Chester Duffett, Hunter Gardyne and Seb Lardies defeated the world ranked No. 20 team from Wales, skippered by Matthew Whitfield from Penarth Yacht Club. It means that Gifford pockets the $1200 winner’s cheque, with $800 going to Wales as runner-up.

It did not go all Gifford’s way. He had to fight back from a deficit of two down in the final, but the Kiwis fought back to win the next three matches in the best of five, to take the title.

Gifford said this afternoon: “The standard of competition was pretty high; so overall, it was a pretty hard-fought event.”

On successfully defending the title won by Stevenson, Gifford said, “We take pride in the Royal New Zealand Yacht Squadron. We have a good group of guys and girls there – and good program. The Club backs us.

“We knew it was going to be tight competition, so we’re very happy with how we went, especially coming up against the Welsh who are number 20 in the world,” ended Gifford, whose crew went in world ranked 117.

Gifford, though, has plenty of racing experience across the board, including representing New Zealand at the 2014 Youth Olympics, and has raced internationally in anything from Optimists, Bytes and Laser Radials apart from match racing.

Of his team, the confident skipper said: “We had a little bit of practice before we came here, but it’s the first time we’ve raced together.”

Tom Spithill, the RPAYC’s head coach, commented: “The regatta went very smoothly. The breeze got up to 22 knots on the first day, and really tested everyone’s boat handling. It was light to moderate for the rest; a good all-round package. It showed who can sail well in all conditions.”

Spithill continued, “We’re very pleased with the standard of the competition. Even the world number 20 had matches taken off him, so it shows how competitive all the teams were – they all come from established yacht clubs with good youth programs in place.

On the efforts of the RPAYC teams, Spithill said, “We are absolutely thrilled we had both RPAYC in the semis. It’s the first time and shows the depth of talent we have. Both teams had the potential to have a crack at this event.

A Sportsmanship award of $250 went to Jed Cruickshank’s team, while the Social Media prize of $250 was awarded to the team from Wales.

The Harken International Youth Match Racing Championship could not be made possible without the assistance of some two dozen volunteers, local members, as well as the international and national umpires.

Special thanks to Harken, a leading manufacturer and marketer of quality sailboat hardware and accessories, which continues to support this event for a 22nd year.

For all the results, please visit the official website: www.intyouthmatchracingchampionship.com.au