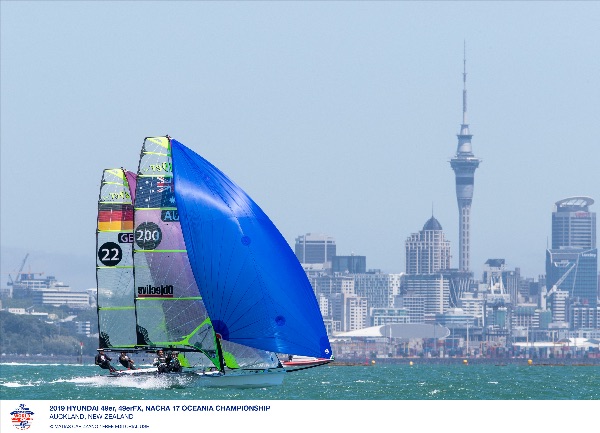 Glamour conditions greeted the 178 international teams on the opening day of racing at the 2019 49er, 49erFX and Nacra17 Oceania Championships. The three-day warm-up regatta before next week's world championships is hosted by Auckland’s Royal Akarana Yacht Club. With the weeks leading up to the event being filled with strong winds and sunshine, the bar was set high and New Zealand certainly delivered.

The 49er class once again staked its claim of being one of the tightest fleets in Olympic sailing. Just ten points separate the top 13 teams after three races with the young American team of Andrew Mollerus and Ian MacDiarmid taking the top honours. France’s Erwan / Pequin were the only team to record two wins and see themselves just one point behind the Americans, while the red hot Kiwi squad were lead by young guns Isaac McHardie and William McKenzie, finishing the day in third.

America’s Cup heroes Peter Burling and Blair Tuke had a consistent day to see themselves in 7th overall and just five points off the lead.

Day one in the 49erFX class was also lead by a team from the United States with Stephine Roble & Maggie Shea relishing in the conditions, claiming two wins and a third to lead by 7 points from Rio 2016 Gold Medallists Martine Grael & Kahena Kunze of Brazil, with reigning European and World Champions Annemiek Bekkering & Annette Duetz just two points further back.

“We’re excited about how we sailed today,” Roble commented after racing. “It was a really fun day out there in really beautiful conditions on Auckland Harbour. We really just focused on good start executiation and trying to sailing big lanes upwind to just let it rip and try to get to the pressure; staying on the lifted tack and we were really happy with just keeping it simple out there.”

It was the Ben and Nikki show in the Nacra 17 mixed multihull fleet. The reigning European Champions from Great Britain, Ben Saxton & Nicola Boniface rattled off three bullets from as many races in the building conditions to lead the fleet by 5 points. This show of dominance sets the scene for a thrilling selection battle with their fellow team mates John Gimson and Anna Burnet, currently 7th. The two teams have been trading wins throughout 2019 and a decisive win at the 2019 worlds could book the winning team a ticket to Tokyo.

USA’s Riley Gibbs & Anna Weis showed blistering speed downwind to finish the day second, ahead of Finland’s Sinem Kurtbay & Akseli Keskinen, with the chasing pack all producing consistent results across the board. The Auckland conditions are proving perfect for the foiling multihulls, with strong winds and flat water producing blistering speeds and tight racing across the fleet.

The full schedule of racing was streamed live to a global audience by broadcast partner SidelineApp. Hosted by New Zealand’s Jesse Tuke and featuring commentary from the likes of three time Olympian PJ Postma and match racing expert Chris Steele, viewers were treated to previously unforeseen coverage of a continental championship. Live and free coverage will continue over the next two days of racing, (find at 49er.org/live) with viewers tuning in from 10:00am Auckland time (NZDT / GMT+13).

Live coverage of the 2019 Hyundai World Championships will be available for 9.95 euro if purchased before November 30, or 14.95 euro thereafter.