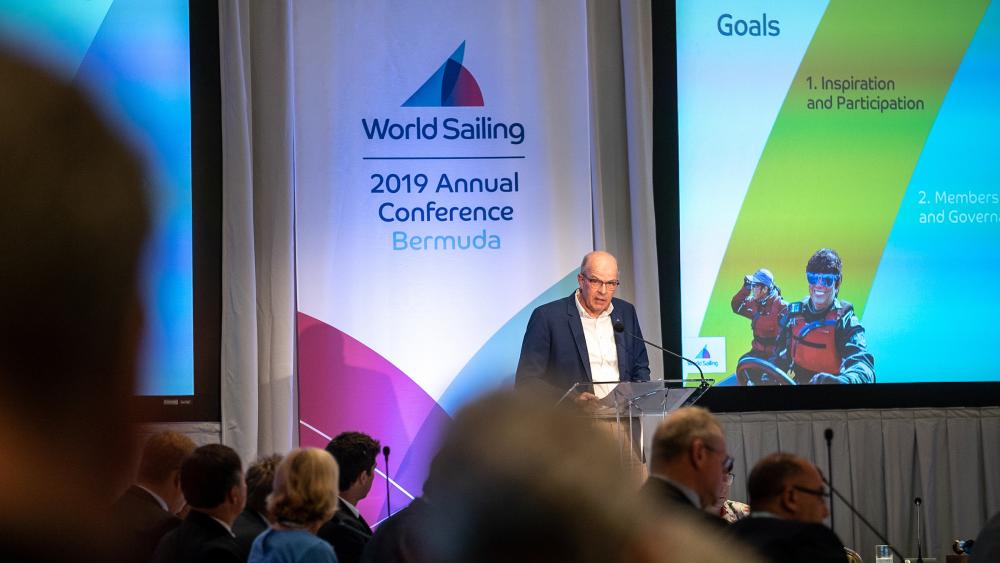 After selecting the iFoil as the Men’s and Women’s Windsurfer for the Paris 2024 Olympic Games on Friday, World Sailing’s Council, the main decision making body, concluded their meeting on Saturday 2 November.

A number of submissions, proposing change to World Sailing’s Regulations, were approved throughout the two day meeting. Decisions were made around Paris 2024 Windsurf Equipment, the inclusion of Kiteboarding and mixed sailing at the Youth Sailing World Championships, amendments of the regulations to support the 2021-2028 events strategy and two new Para World Championships.

The amendments to World Sailing’s Regulations will now go to the Annual General Meeting for ratification on Sunday 3 November.

Council approved the selection of the iFoil after 31 members voted in favour with eight against and two abstentions. This decision will now go to World Sailing's Annual General Meeting who will ratify the decision.

The list of Events and Equipment for Paris 2024, to be ratified at the Annual General Meeting:

Kiteboarding to be included in the Youth Sailing World Championships

World Sailing’s Council unanimously supported the inclusion of a Mixed One Person Kiteboard Event into the Youth Sailing World Championships at some point from 2021. This will align the Youth Worlds with the Paris 2024 Olympic Sailing Events and strengthen the pathway for Kiteboarding to the Olympic Games.

Youth Match Race Rankings to be introduced
In 2014, World Sailing held the inaugural Youth Match Racing World Championship and since then, youth match racing has been growing worldwide.

To further develop youth match racing, World Sailing’s Council unanimously supported the inclusion of a Youth Match Race Rankings, for skippers under 23 years old on 31 December of the year in which the event is held, to give a platform for recognising and promoting youth athletes.

The aim is to extend the quality of youth match racing events worldwide by better defining the ranking of sailors, identify sailors to be invited to events and to encourage participation.

In May, World Sailing partnered with Virtus: World Intellectual Impairment Sport. The signing of a Memorandum of Understand would see the organisations work together towards the development and implementation of strategies and sailing programmes for people with intellectual impairments.

World Sailing Events Strategy 2021-2028
World Sailing’s Event Strategy for 2021 – 2028 was approved at the 2019 Mid-Year Meeting in London, UK. With the Olympic venues determined for Paris 2024 and Los Angeles 2028, the goal of the strategy is to focus on the requirements for all sailors, add value for all stakeholders and promote the world's top sailors.

The Events Strategy has three goals:
• Promote sailors progression with a clear regatta structure
• Ensure a stable regatta calendar with a credible ranking system
• See that Olympic level sailing is promoted to a greater audience to drive participation

Ahead of the Conference, the Chairman of the Events Committee put forward three submissions regarding the World Cup Final, the calendar of events and the World Sailing Rankings.

As a result of the support, an annual World Cup Final has been added to the regulations and will be an annual pinnacle Olympic classes regatta for MNAs and sailors. A Calendar Working Party will be created to plan for key Olympic class events to ensure there are no clashes of events. And lastly, a Rankings Working Party shall ensure the development of the World Rankings in line with the strategy.

Other Business
Council also approved the quota for The Hague 2022 Sailing World Championships where 1,220 athletes will sail in 830 boats. The Men’s and Women’s One Person Dinghy fleets will be the largest with 120 boats respectively.

The next largest will be the Men’s and Women’s Windsurfer with 100, followed by the Mixed Two Person Dinghy, Men’s Skiff, Women’s Skiff, Mixed Multihull and Mixed Kiteboard on 70. The smallest fleet will be the Mixed Offshore Keelboat with 40 boats. Decisions around the Para World Sailing Events included in the programme will be made in 2020.

The Annual General Meeting will commence at 09:30 local time on Sunday 3 November and a live stream with full audio and the primary screen will be available to watch here – www.youtube.com/worldsailing.tv.