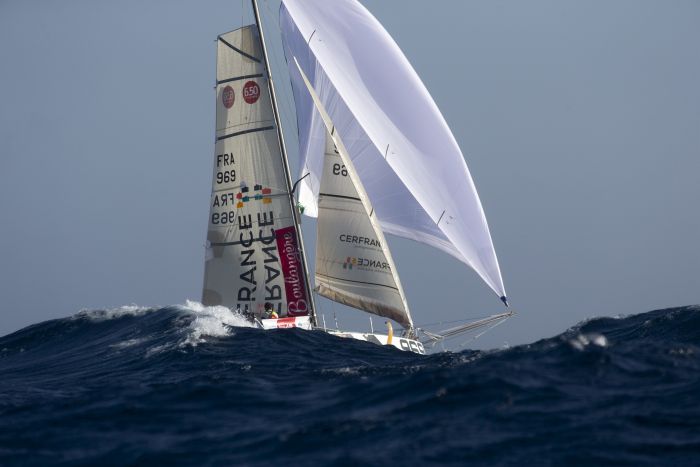 This Sunday, a day on from the start of the second leg of the Mini-Transat La Boulangère, the 81 sailors out on the racetrack are benefiting from trade wind conditions that favour slipping along and long surfs: a fairly stable NE’ly breeze of 20/25 knots, accompanied by an orderly swell of 1.5 to 2 metres and perfectly blue skies stretching right across the horizon.

Tanguy Bouroullec, on his foiling prototype 969 – Cerfrance, will be able to exploit these downwind conditions more than anyone else. Indeed, alone at the front of the fleet, conditions are perfect for finally getting the best out of his appendages. In the production boat category, those to the South have the edge in a group led by the excellent Ambrogio Beccaria (943 – Geomag). For her part, Marie Gendron is busying herself in Las Palmas de Gran Canaria effecting the necessary repairs to her keel fairing and spinnaker pole so she can get back out on the racetrack as quickly as possible.

Advantage to the foiler

The second leg of the Mini-Transat La Boulangère is synonymous with downwind conditions in the trade winds, right the way from the point the fleet leaves the Canaries to the gateway to the West Indies. Inevitably, these are the favourite conditions of Tanguy Bouroullec and his foiling prototype 969 – Cerfrance. This is evidenced by the fact that since last night the boat has been creaming along and appears to have a firm grasp on first place. Making an average speed of 12 knots over the past few hours, the sailor from the Finistère region in NW France has been stealing a march on his pursuers and boasts a 7.3-mile lead at the 16:00 UTC position report.

Slipping along nicely in the South

In the production boat category, a group of fifteen or so Mini sailors, fronted by Ambrogio Beccaria, are benefiting from favourable positioning to the South. This is the case for Benjamin Ferré (902 – Imago Incubateur D’aventures), Kéni Piperol (956 – Caraïbe Course Au Large), Florian Quenot (946 – Mini Skippy) and Paul Cloarec (951 – Sonergia Branchet), who are all racking up double-figure speeds, fluctuating between 11 and 12 knots, whilst the bulk of the fleet positioned further North are barely making 6 to 9 knots.

That said, it will be interesting to follow the progress of Briton Joe Lacey (963 – Early Bird Racing), who finally made it to the finish of the first leg after multiple energy woes and 2 fairly long pit stops, and is now part of this slower posse to the North… albeit on a direct route…

The pontoons of the Vela Latina are a hive of activity in Las Palmas de Gran Canaria with lots of willing volunteers to help out Marie Gendron. Once again, the unconditional solidarity or ‘Mini spirit’ is in full swing. A native of France’s Loire-Atlantique region, she’s notably counting on the support and assistance of a number of former Mini sailors as well some locals, who have made themselves available to lend a helping hand on her boat. The repairs to her keel fairing and spinnaker pole are progressing well and she should make it back out onto the racetrack this evening.

On-board issues for some

One of the support boats, Ocean Dentiste, has informed Race Management that Julien Berthélémé (742 – Team BFR Marée Haute Orange) is encountering a few issues with his rudder. Cracks and fissures have appeared and if the problem worsens, he’s planning to swap it over. Meantime, another of the support vessels, Aloha, reports that Raphaël Lutard (900 – Arkema 3) is lamenting power issues.