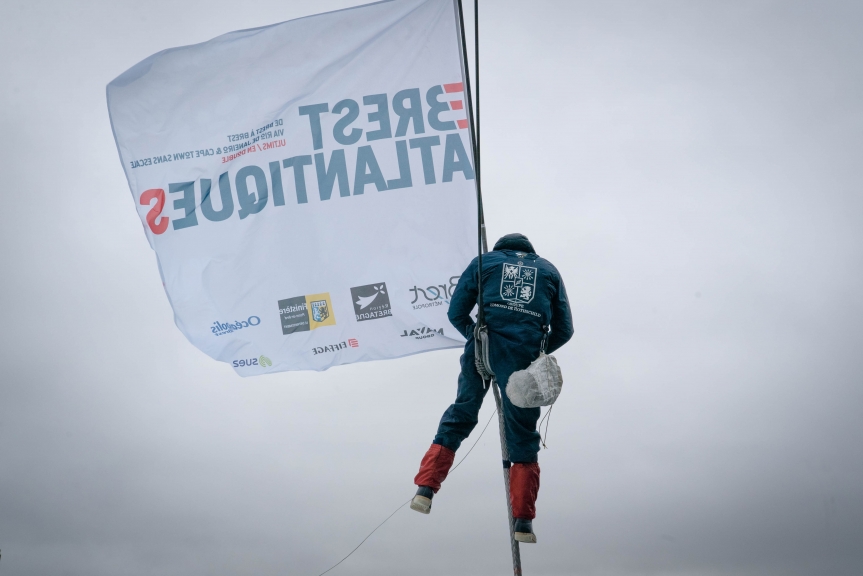 This weekend, the tip of Brittany and more broadly France’s Atlantic seaboard will be swept by the first big autumnal depression with winds bordering on 50 knots and very heavy seas.

There is nothing exceptional about these conditions at this time of year, but due to the inherent danger, they’re proving somewhat incompatible with the start of the Brest Atlantiques initially scheduled for Sunday 3 November at 12:02 UTC.

In this way, the maxi Edmond de Rothschild and the other three 32-metre rival giants (Actual Leader, Macif, Sodebo Ultim 3), will have to wait it out for a few days before they can set sail on the 14,000 miles that make up this unique course.

A new slot for the start might well present itself on Tuesday 5 November, a scenario that, if confirmed, would suit Franck Cammas and Charles Caudrelier to a T, both of them keen to get their teeth into this race. Watch this space…

The course for the Brest Atlantiques is unique with its 14,000 nautical miles taking in the North Atlantic and the South Atlantic.

The crewed format selected is just as special. For the first time in the Ultim category, a media man will accompany the pairs of skippers on Edmond de Rothschild and the decision to go with Yann Riou was quick, simple and natural.

The three men know each other very well having sailed together on multiple occasions and during the victorious round the world campaign, the Volvo Ocean Race, in particular, where Yann took up the role of onboard reporter for the first time.

Just a few days before they set sail on a race that is as thrilling as it is demanding, they share their viewpoints.

“Franck is a perfectionist who makes no concessions in his bid to achieve his objectives. I really like sailing with him and I was delighted to see him join the Maxi Edmond de Rothschild project as he has a major impact on performance.

“On a human level, he’s likeable and we know each other sufficiently well to be able to tell one another things; which is essential in a long race. In the Brest Atlantiques, it’s an impressive line-up and there are some incredible track records!

“However, I believe that Franck stands out in the sense that he is one of the rare few who has had an influence on his sport and on what offshore racing is today in France. On top of that, on a personal level, the trust he and Stéphane Guilbaud showed in me in the Groupama project and the Volvo Ocean Race 2011-2012 in particular is the reason I do the job I do today.

“Above all else, Charles is a friend I get on very well with. From a competitive viewpoint, I believe that his method of preparation is heavily inspired by Franck, whilst adding his own personal touch that includes a great deal of humanity in the way he manages a project.

“His victory in the last Volvo Ocean Race showed that his determination paid off. At sea, his choices are pertinent and he is driven by the same quest for performance as Franck, whilst remaining human and pleasant to live with,” he said.

“We’re in a fairly classic weather pattern for the season with what we refer to as a progressive circulation and a train of depressions in the North Atlantic, which are sweeping across Europe with varying degrees of intensity.

“The one that’s arriving this weekend is very deep, with south-westerly winds clocking round to the west-nor-west of 50 knots and heavy seas with waves 8 to 10 metres high,” explains Marcel Van Triest, Gitana Team’s weather specialist, who will also be responsible for ‘routing’ the duo on Edmond de Rothschild once the race is launched.
.
“It’s the first big depression Europe’s been subjected to this autumn and its trajectory has a particular bearing on the Brest Atlantiques,”

In light of the tempestuous conditions forecast, Jacques Caraës, the Race Director, and the organisers have no other option than to delay the start of the 1st edition of the Brest Atlantiques.

This is always a tough decision to make, but it’s also a popular one, welcomed by all the sailors involved: “There was no debate, it would have been impossible to set sail on Sunday in terms of the safety of the men and the machines”, insists Charles Caudrelier:

“We often talk about the Southern Ocean as having the most impressive seas, but having circumnavigated the globe several times, the worst conditions I’ve encountered were in the Bay of Biscay. Indeed, more than the wind, it’s the sea state that’s hard to deal with and it may prove dangerous.

“In the Bay of Biscay, the continental shelf rises very quickly and this can pick up short, cross seas. As such, with the 8 to 10 metre waves announced this weekend, it was deemed unsafe to navigate, even for boats as big as ours that are designed for sailing round the world.”

For the past six months, the two great sailors have been sharing the helm of the Maxi Edmond de Rothschild. Theirs is a formidable duo, whose complicity dates back a long way before their arrival within Gitana Team. Indeed, their complementary characters were one of the keys to their joint recruitment.

Maxi Edmond De Rothschild
The Maxi Edmond de Rothschild – officially known as Gitana 17, joining the long and famous list of Gitana boats – is a 32 metre long by 23 metre wide trimaran designed by the architect Guillaume Verdier and his team, in collaboration with the Gitana design office. Precursor, this giant of the seas – with hulls which are notably streamline aggressive and innovative.

It is very different from those known on current oceanic multihulls – opens the door to a new generation poised with the ambition to sail around the world.