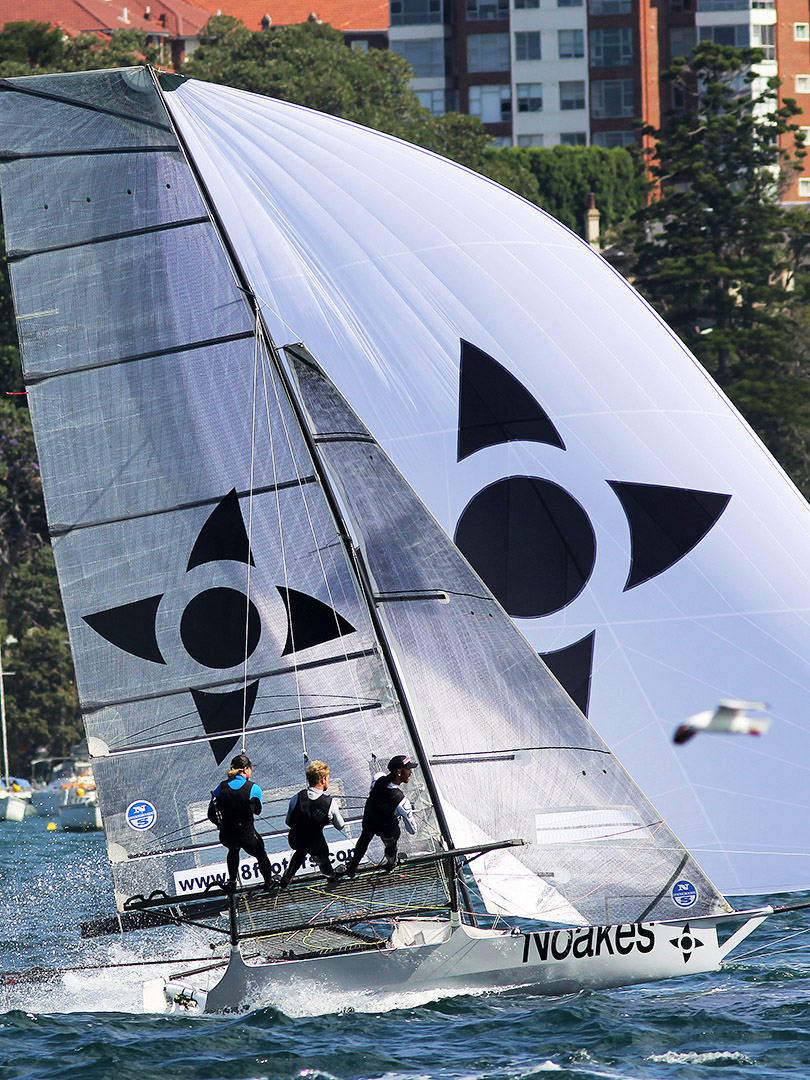 Sean Langman, one of Australia’s most versatile sailors, has set himself another wide-ranging program in the 2019-2020 Australian summer, with a season of 18ft skiff racing on Sydney Harbour, skippering Noakesailing, as well as skippering the 69ft Naval Group in the Rolex Sydney Hobart Yacht Race 2019.

Langman has already tasted success this season, along with his Noakesailing crew of Ed Powys and Nathan Edwards, on winning two of the first three races so far in the Australian 18 Footers League’s Spring Championship on Sydney Harbour.

Powys is a highly credentialed sailor from the UK who has competed in the 49er class, the Extreme Sailing Series, British team for the 35th America’s Cup and SailGP. He is the son of legendary Australian yachtsman, David Powys. Edwards is a young, local skiff sailor who is having his third season in the 18’s.

Langman has achieved many successes both on and off the water, and has always been prepared to put his money where his mouth is, including assisting so many young and talented sailors along the way.

Managing Director of the Noakes Group, Langman claims he primarily introduced Noakes Youth to assist young people make their way in the world. He once said, “I called it opportunity and choice.” His daughter, Nicki, was the first youth coordinator.

Langman’s original Noakes Youth involvement came in the 18s in 2007, when he supported Jacqui Bonnitcha with her campaign to contest the 2007 JJ Giltinan (world) Championship on Sydney Harbour. Ash Rooklyn later had similar support for two seasons in the 18s.

The Sydney sailor’s latest recruit to the 18s is Yvette Heritage, who is presently competing against her ‘sponsor’ under the Noakes Blue banner. The Noakes Blue theme represents the Recreation business side of Noakes, which has an approach of inclusiveness within the business and the community.

The 2019 journey south to Hobart on Naval Group, built as Moneypenny, will be a different one to those in recent years when Langman skippered the 1932-built, 30ft gaff rigged Maluka of Kermandie.

He says: “We’re supported by the French company, Naval Group, which is building submarines in Australia. The purpose of the Naval Group yacht is to facilitate Team building within the Australian-French Naval Group work force.”

A real highlight of an incredible nautical career is the Sydney to Auckland record set by Langman and his crew of the 60ft trimaran, Team Australia (nicknamed ‘Big Bird’), in October 2013.

“We had perfect conditions. Essentially we beam-reached on port to the tip of New Zealand, gybed, parked for a couple of hours, then beam reached on starboard to the finish. It’s a scenario that’s basically unheard of.”

It was Team Australia's second speed record in eight months. The 60ft trimaran had set a new fastest elapsed time of 29 hours 52 minutes 23 seconds for the passage from Sydney to Hobart in February 2013.

On Sunday, the Noakesailing team will go into Race 4 of the League’s Spring Championship just one point behind the series leader, appliancesonline.com.au (Brett Van Munster, Phil Marshall, Kurt Fatouris).

Two new teams yet to compete in the Championship are Tech2 and Team Clout.

Spectators can follow the racing on the spectator ferry, which leaves Double Bay Wharf, alongside the rigging area, each race day at 2pm.