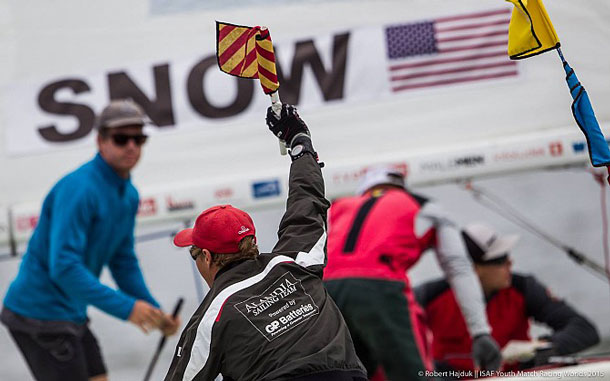 Race Day 1 was slow to start in the channel with a shifty wind blowing from the southwest at 14-16 knots combined with very strong current flowing out into the Baltic.

These conditions made it difficult to set the marks and tricky for competitors going upwind as well as upstream.  Despite a reduction in wind speed and change in direction near the end of the day, eleven flights were successfully completed.

Flight 7: Match 1 (Snow vs. Gilmour) was restarted when they made it to the first mark on a single tack, which is against the rules.  In terms of results, it’s still early but eyes are on Denmark’s Joachim Aschenbrenner and USA’s Nevin Snow as each won 3 of 3 matches.

Race Day 2 winds were lighter at 8 knots blowing straight across the channel from the southeast making it impossible to set the course inside.

Using the second race area outside the channel, thirteen flights were completed starting tomorrow with flight 25.  In a hot match between Snow and Ronnberg in flight 21 Snow lost his winning streak by gaining a second penalty whilst completing his first just before crossing the finish line giving Ronnberg the win.  In flight 18 Follin’s team received a half point penalty for bow contact with Galati.  Aschenbrenner takes the lead winning 9/10 races followed by Snow who holds 8/9 wins.  Gilmour and Ronnberg both have 5/7 races won.

Twelve teams are competing in a weeklong match race event to win the title of World Champion and climb those rankings. Throughout the week the Race Committee will run a series of qualifying rounds, by way of a round robin consisting of 33 flights, giving everyone a fair chance at competing with each other.

Teams will rotate through five identical TOM28 sailboats.  Depending on the daily conditions, being primarily wind direction, races will either take place in the channel that runs between the two parts of Swinoujscie or outside the channel entrance in the Baltic Sea.  For added interest and as a change in scenery the channel is often busy with various ferries, polish military, other large shipping vessels, and the Viking transport from Wolin.

Introduced in 2014, this is its second year and as an ISAF ‘Grade W’ event this is at the highest level of competition.  Participants have been invited from as far as Australia and the United States to as close as our host country, Poland.  Each team consists of 4-5 members across a wide range of skill levels and experience lead by skippers holding a gamut of ISAF rankings from Sam Gilmour’s 13th, at the top of the range, to Mischa Von Ruti’s 677th.  All competitors must be under 23 years of age until the 31st of December 2015.