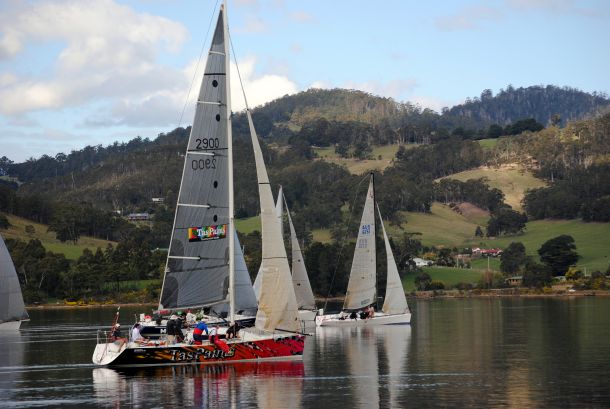 Cock of the Huon winner

Cleopatra, Matthew Denholm’s Mumm 30, has returned to her former home waters on the Huon River on a victorious note, winning the traditional Cock of the Huon Race, starting and finishing off Shipwrights Point at Port Huon.

A brilliant race overnight in winds that failed to get above 6 knots, in which she finished third in fleet, just over 50 minutes astern of Tony Lyall’s TP52 Cougar II, saw Cleopatra win both the AMS and PHS handicap categories of Division 1.

Today, an outrunning tide and a late seabreeze saved the day after the 33 boat fleet had drifted down the Huon River for the first 45 minutes of the Cock of the Huon race.

Again, Cleopatra was in her element in the light breeze, winning the start and outpacing the bigger boats until the seabreeze filled in, but still winning Division 1 and overall, the PHS-scored Cock of the Huon by a comfortable margin.

As the Cock of the Huon winner, the rules required the Bellerive Yacht Club-based Cleopatra to relinquish first place in Division 1, which then went to David Taylor’s modified Sydney 36 Pisces.

Division 2 went to Quantum sailmaker Mike Hutchinson’s Emotional Rescue, a Hobie 33 from the DSS, after a race-long duel with Huon Yacht Club’s Gomez, Noel Cook’s Adams 10. However, Gomez was beaten out of second place on corrected time by Another Girl, an Elliott 780, also from HYC.

Joanne Harpur flew over from Melbourne, where she lives, to skipper her Jeanneauu 36, Spirit of Freya, to victory in Division 3.

Cleopatra won both handicap divisions of the night race from Hobart, the 30-footer third to finish after Derwent Sailing Squadron race officers shortened the course at Green Island instead of the designated finish just south of Gordon in the D’Entrecasteaux Channel.

“Six knots was the best we got all night and for the final three hours it was just a knot and a half at the most,” commented DSS sailing manager Mike Denney who skippered his own yacht Wild West.

“Some of the boats took almost 11 hours to finish, despite the shortened course and there were quite a few boats that retired from the race.

Cougar II, Tony Lyall’s TP52 took honours in the night race, which started from off Hobart’s Castray Esplanade at 7pm on Friday, crossing the finish line 48 minutes after midnight, 38 minutes and 25 seconds ahead of Gary Smith’s The Fork in the Road, with Cleopatra just under 2 minutes further astern.

Cougar II and The Fork in the Road chose to only contest the overnight race, using the early hours of the morning to carry out night training for the crews.

Tomorrow the Pipe Opener concludes with a passage race from Port Huon to Gordon.