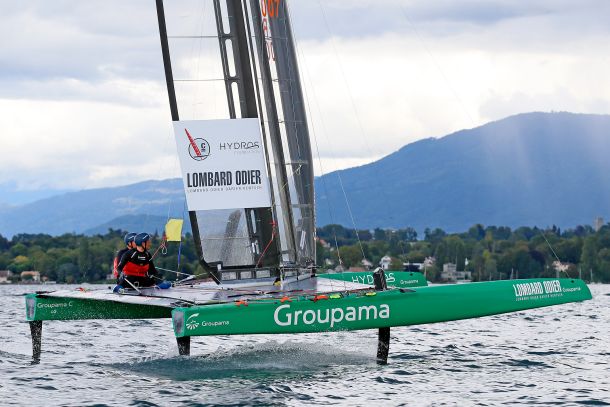 A resounding victory for the Groupama team in the LITTLECUP, the International C Class catamaran championship which was held this week on Lake Geneva at the Société Nautique de Genève. And first and foremost a technological win for energy efficiency and the sharing of science in the “Little America’s Cup” which has nothing to envy of its big sister.

Groupama Sailing Team simply breezed through the competition the whole week, holding on to Trophy, unrivalled. The team’s C Class yacht is extremely well honed, flies with her foils and rigid wing as if she were a carbon bird. Above all else, it is the sheer hard work put in by the Cammas/Viat crew which makes its mark on the Little Cup, before turning to the big one, the America’s Cup.

Challenged by the Swiss team Axon Racing on a boat based on the Archimedes principle (a planing design which does not fly), the final was fought in Friday’s light wind over two rounds of match racing. The championship came to an end with that score due to lack of steady wind on Lake Geneva this Saturday. The key to success and the challenge for Groupama this year was taking off as soon as they hit 5½ knots, maintaining high performance with their C Class cat able to fly three times faster than the wind. Specialists agree that it is, without any shadow of a doubt, currently the most innovative racing craft in the world.

“It’s a pity. We’d like to have seen this through to the end”, commented competitor Benoît Marie, alongside his fellow crew Benoît Morelle of Axon Racing, disappointed by the absence of racing today. The light wind, forecast by the meteorologists had been much hoped for by the Swiss as it would have played into their hands and provided a little bit of suspense. Same thing on the French team, who regret not having been able to finish in style, but who were pleased, if not relieved, to win once again. As Franck Cammas said, “It’s one thing to be favourite, winning is another matter. Louis Viat and I really enjoyed racing together on what remains a really difficult course to sail”.

As for the third place fleet race playoff, the Swiss on Norgador take third place just ahead of the German team Sentient Blue.

After having waited on the Lake until the 16h deadline set by the Jury, all the teams made their way to the Société Nautique de Genève for the prize-giving ceremony, marking the end of this highly eventful week, during which lots of exchanges took place in the village both between the teams and the general public, who turned out in number. Franck Cammas and Louis Viat were presented with the Little Cup by Patrick Odier, Lombard Odier Managing Partner, a committed principal partner of the LITTLECUP 2015, which, according to Steve Clark, C Class President, “has entered a new era” and who “would like to extend thanks to the Hydros Foundation and Jérémie Lagarrigue in particular for the perfect organisation”.

The Hydros Foundation wished to present a Special Prize to the Canadian student team Rafale – ETS for their passion, hard work and tenacity in this high level competition. Starting from scratch, the team made it to Geneva two years later with a functional flying Class C which finished the competition in spite of a memorable capsize. “This is precisely the values to which we attach importance in the Hydros Foundation and which we have been supporting within our family for the past 10 years in the Hydros programme” enthused Alexis Lombard, founding member of the Geneva based foundation, a recognised association of public interest.

The LITTLECUP 2015 ends with all participants being rewarded collectively by their participation in an event combining leading edge technology, top level sport and the sharing of knowledge for the benefit of a more energy efficient and environmentally friendly future.