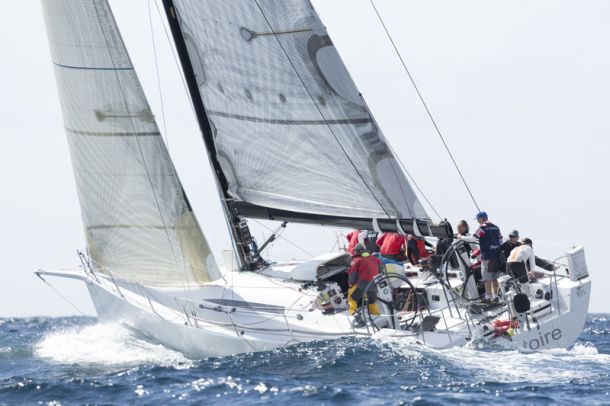 Victoire is back in form, Darryl Hodgkinson’s Cookson 50 taking overall honours in the Cruising Yacht Club of Australia’s Flinders Islet Race overnight, while the new kid on the block, Chinese Whisper, took line honours and missed the race record by a mere 15 minutes and 14 seconds.

Hodgkinson, the droll 2012 Ocean Racer of the Year and 2013 Rolex Sydney Hobart winner, was recently lamenting he had suffered “trophy withdrawal” after failing to make the top of the podium at major events in the past year. The Double Bay plastic surgeon was not aboard for the win though, as he and wife Katherine are overseas celebrating a long-term wedding anniversary.

Victoire’s sailing master, Sean Kirkjian, skippered the boat in ‘Dr Darryl’s’ absence. The Sydney yachtsman and the crew were pleased with the race – and especially with the boat’s performance in reaching conditions.

“If the Flinders race was always like this, you’d do it every week. It’s usually the race we all hate to do, but we had a lovely reach down and a lovely reach back,” he said of the race that takes the fleet south each year.

Kirkjian said reaching had sometimes been Victoire’s weakness. “But we were able to experiment in this race. On the reach back, Balance went for a staysail, but that wasn’t working for us. They were getting away from us, so we put a jib top up which allowed us to put the staysail up and they were no longer making time on us.”

A couple of sail changes later, and Victoire was back on top. “We caught them off Clovelly and knew we had them on time,” Kirkjian said. “Darryl’s been texted a 100 times, so it will be a bit of a double celebration for him.”

On their win, Kirkjian said, “I think Balance and Victoire pushed each other quite hard all the way. That also helped both of us put a bit of a gap on the rest of the fleet.”

Now Victoire’s name will be added to the Ron Robertson Memorial Trophy after beating Paul Clitheroe’s TP52, Balance to the post by nearly three minutes. The pair also finished top two under the ORCi rating system.

As it sometimes does, the weather made a mockery of the forecast. Instead of wet, cold conditions and light fluky breezes, the fleet enjoyed just the opposite. The sun was out, there was no rain and the yachts sailed in pleasant off the breeze winds around the 92 nautical mile course.

Patrice’s fourth overall leaves her second in the BWPS. Her navigator, Richard Grimes, reported from the course throughout the race.

At 12.45pm yesterday, Grimes said: “The wind is at 15 knots from just north of east and we’re sailing along with a Code Zero. Conditions are fantastic with a clear sky. Chinese Whisper is about four and a half miles in front of us and Balance, Victoire, Pretty Fly III and Triton are around a mile in front. Flinders Islet is seven miles ahead of us, we are making good time.”

Later in the afternoon, Grimes came back with: “We’re sailing cracked sheets in 12-14 knots now. The breeze softened earlier, but we’re sailing faster now and expect to be back in the Harbour around 7pm.” He said winds had varied between 10 and 15 knots throughout the race.

Chancellor is also the PHS overall leader in the BWP, with Wax Lyrical in second place, but on equal points. Black Sheep is currently third overall.

Quikpoint Azzurro (Shane Kearns), the oldest (34 years) and smallest (10.1 metres) boat in the fleet brought the race to an end shortly after 1am this morning for 20th place overall. Kearns and his S&S 34 recently won the Land Rover Sydney Gold Coast Yacht Race, but conditions in the Flinders Islet Race did not suit the smaller boats.

The next race in the Blue Water Pointscore is the Newcastle Bass Island Race starting at 7pm on Friday 16 October.