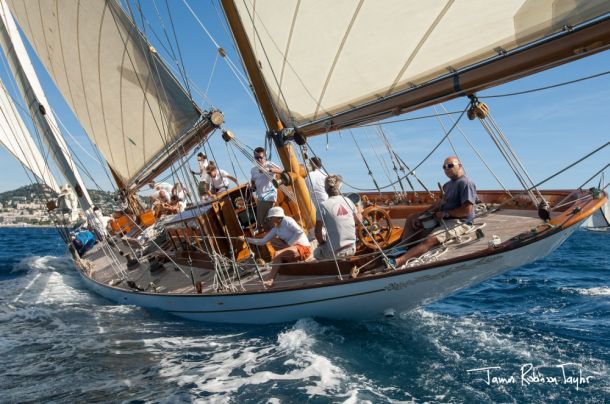 It's show time again in Cannes! The Cote D'Azur is going to play its cards right, with an exceptional line-up and some of the biggest and greatest yachts from the last century or even older: Bona Fide (Charles Sibbick, 1899), Lulu (Raibot Caillebot, 1897), Marigold (Charles Nicholson, 1892) and many more. On a stunning race area, set between the massif of the Estérel and the Lérins islands, the bay of La Napoule is expected to deliver a whole week of great sailing conditions, with local light winds sometimes getting stronger thanks to thermal breezes, except for tomorrow where a small cold front should add some knots to the forecasted westerly.

With the World Cup on, the Règates Royales have their little piece of rugby too. Italian Andrea Lo Cicero, who used to be prop in the national team, piling up more than 103 matches and four World Cups, is in Cannes sailing on board Chinook. After being part of the America's Cup team Luna Rossa, and crewing on the TP52 Azzurra, Lo Cicero also an international UNICEF ambassador, has fallen in love with classic yachts and has been a regular crew member on board Chinook for three seasons. Sistership of Rowdy, the boat that triumphed in almost every Mediterranean race she took part in since 2007, this New York 40 is gaff rigged, whilst Rowdy is Marconi rigged: no doubt the match between the two 1916 Nathanaël Herreshoff one-designs is going to be a hot one.

Some sixty classic and vintage yachts, passionately sailed and maintained by their owners like Shamrock V, Elena, Bona Fide, Avel (1896), Moonbeam (1903), Mariquita (1911), together with some of the most successful IOR racers from the 70s like Helisara, Palynodie, Il Moro di Venezia and Ganbare will gather the very who's who of international classic yachting. Metric classes, 6, 8, 12, 15 MI boats will further spice up the show in Cannes. But the forty-boat strong Dragon fleet will also have its shining stars: Russian skipper Anatoly Loginov, Italy's Giuseppe Duca and Dane Soren Pehrsson…

Tuiga and Mariska are undoubtedly two of the most assiduous classic yachts on the Mediterranean, Brittany and UK's racing scene. Tuiga, the 15MI built in 1909 on a William Fife design for the Duke of Medinacelli is sistership to Hispania, the yacht owned by the king Alfonso XIII of Spain. Derived from the metric class created in 1906 in London to integrate the American, British, Scandinavian French and Swiss rules, the 15MI can be considered as the world renowned America's Cup Twelves' older brothers. The class was also selected for the 1908 London Games, but the lack of participants slowly eroded its growth.

After two and a half years of renovation in La Ciotat, Mariska touched water again and went back racing against her little brother Tuiga, the boat epitomizing the Yacht Club de Monaco worldwide. Found abandoned in northern Holland, her interiors totally transformed to be used as an house-boat, and he hull shortened, the third 15MI has undergone a real rejuvenation treatment. Mariska was originally commissioned by A.K. Stothert, she won the International 15MI Cup in 1909, later sold to Captain F.E. Guest, she then sailed on Swedish waters before being transformed into a yawl in 1923 by a new owner and she was used as a cruising yacht until 2001.

Eighty-six years of age but she doesn't look it!

Just like the Régates Royales, organized for the first time in 1929 to pay tribute to King Christian X of Denmark, the Dragons are celebrating their 86th anniversary. The boat was designed by Johan Anker on a commission by the Royal Göteborg Yacht Club in 1927, and over the years more than 3,000 Dragons have been built.. The first boat was built in 1928 and known as the “20 square metre” but started to become popular in 1929. The sail plan was updated in 1945, to include a spinnaker for a total of 27 square metres. On a curious note, in the late 40s the soon to be Queen Elizabeth rceived a Dragon named Bluebottle as a gift. And today in Cannes it was Briton Ivan Bradbury to win the first race of the series.

Music concerts every night and a new collection

There will be music every night at the Régates Royales' village, rock & roll, gipsy, jazz, you name it: the right way to end a hard day on the water. Main sponsor of the Régates Royales since 2007, Marine Pool this year too offers a new clothing collection branded with the event's logo, to enjoy at the company's stand on the Vieux Port.

With the approach of a cold front from the Atlantic, today's light wind, will become a stronger westerly tomorrow afternoon, increasing from 10 to 15/20 knots. The weather will stay sunny and warm all week long, with some 25° in the afternoon whilst the winds will be light to moderate until Sunday.