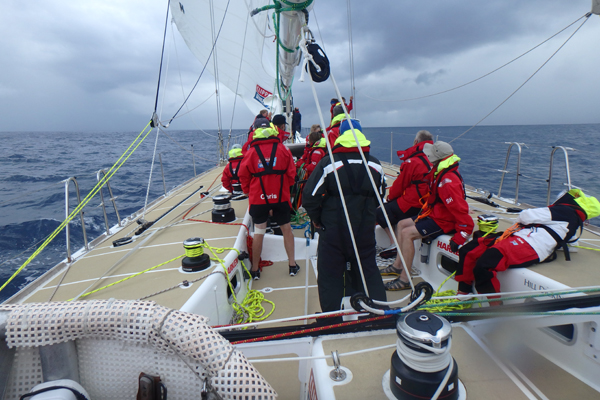 Qingdao, Derry~Londonderry~Doire, GREAT Britain and Garmin are all in the Ocean Sprint phase of the course, headed south in steady south-easterly Trade Winds.

The teams are focused on careful trimming and helming as they beat upwind in an attempt to be the quickest yacht in the section of the race course, positioned between 5 degrees south and 10 degrees south.

Race leader LMAX Exchange recorded an elapsed time of 31 hours and 55 minutes in the Ocean Sprint, an average speed of 9.4 knots. This will be the time to beat for the other teams.

Skipper of second-placed Qingdao, Igor Gotlibovych, said: “The Ocean Sprint is a chance to pit our trimming and helming skills against our competitors' luck with the weather. The past few days felt like a running start to the Ocean Sprint. The boat is already trimmed, re-trimmed, and found to be going faster when the Skipper is nowhere near the helm.

“During the sprint, our focus is on covering as much ground south as possible. In our current position, we would deviate from the shortest route to Rio to focus on the Ocean Sprint, except the wind remained much further on the nose  than forecast, meaning that we barely had to (or were able to) alter course at all.

“We are now almost 24 hours in, with just a few more to go. Unfortunately, we will not know the final results until all twelve yachts have completed the sprint.”

Garmin, skippered by Ashley Skett, is in fifth place. He described the conditions in the beat to Rio.

“The weather conditions remain the same as they have been for the past few days, with the strong south-easterly trades still providing us with all the breeze we need to make a good steady speed in the right direction. We passed through the starting gate latitude for the Ocean Sprint today, although it's fair to say that our main focus is on the race and our finishing position, so we will probably not be making a dash south for this one,” he said.

“Crew are still working as hard as ever to make the boat go fast, despite the difficult tilted living conditions, which can be exhausting at times.”

Will Qingdao finish the Ocean Sprint by 1524 UTC today to beat LMAX Exchange’s time? Follow our Twitter feed for the up-to-date information.

All positions correct as of 0800 UTC.