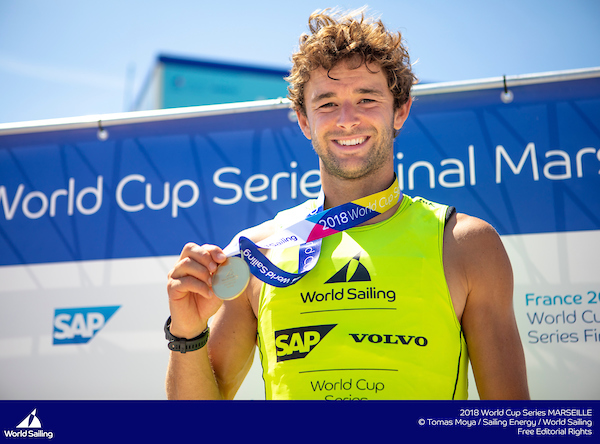 After a series of delays and postponements, the wind started to stabilise at around 13:30, enabling the Nacra 17, Men's RS:X and Women's RS:X to sail in wind conditions that varied from 5-7 knots with differences over the race track.

Tita and Banti in the Nacra 17 and Men's RS:X windsurfer, Le Coq, held the lead overnight in their respective fleets – so for them, staying at the front of their rivals in the Medal Race would seal the deal.

Meanwhile, Geller started the day in fifth, nine points off leader Lilian de Geus. She had plenty of work to do to overturn the deficit on the leader and overhaul Katy Spychakov (ISR), Emma Wilson (GBR) and Stefania Elfutina (RUS) who were all ahead of her.

Geller sailed without fear and got off to a strong start in the Medal Race. She had planned on staying close to her rivals to give herself a chance of a medal but, as they went left of the race track on the first upwind leg, she opted to head to the right and found some stronger breeze that pushed her ahead of the fleet.

The medal contenders remained bunched up and as they fought for position, Geller pushed forward and claimed the race win. She had an anxious wait at the finish line to see if a medal would be heading her way and, as de Geus came through in sixth, the Israeli claimed gold, finishing just a single point ahead of the Dutch racer who settled for silver.

“I have never won a senior competition before; this is my first event win and I am so happy,” said a vibrant Geller ashore after racing.

“I feel great. The World Cup Series are always good to compete in because the top sailors attend and I just can't believe that I have won it.”

Elfutina finished the Medal Race in third place and completed the podium, one point ahead of Spychakov.

It was an all-France podium at the final round of the World Cup Series in Hyeres in the Men's RS:X and, 90km down the coast at the World Cup Final, the French dominated once again.

Le Coq held an 11-point advantage over national rivals Thomas Goyard and Louis Giard before the Medal Race. Le Coq got off to a slow start and Goyard was quick to put the pressure on as he moved himself into a strong position.

Le Coq had plenty of work to do to recapture his form as he explained: “It was crazy. I didn't have a good start so I had to push a lot to recover my position and I managed to regain five positions after the first downwind.”

Those positions turned out to be crucial for Le Coq because Goyard was sailing well to come through in fourth. Le Coq dropped back to eighth but this was just enough for him to claim gold by three points over Goyard. “You can expect everything in a Medal Race and that's what we saw with these crazy winds.”

Giard finished fifth in the Medal Race which confirmed the all French podium.

On the eve of the Medal Race, Tita and Banti had a day they'll never forget after they won all four of the races in the Nacra 17. This handed them a healthy advantage going into the Medal Race and, provided they kept Ben Saxton and Nicola Boniface (GBR), Vittorio Bissaro and Maelle Frascari (ITA) and Riley Gibbs and Louisa Chafee (USA) at bay, gold would be theirs.

As light breeze plagued the racing area, it took three starts before the fleet eventually got underway in fair conditions.

Tita and Banti kept out of trouble at the start and kept their rivals close, sailing through in sixth to give them another gold medal on the international stage. “It's three events in a row where we have taken the gold medal,” said Tita. “It's like when you do the 'bottle flip' – you can't be certain whether you'll be able to do the fourth one. It's hard but we're so pleased.”

Much like bottle flips, practice makes perfect and the Italians spent a considerable amount of time over the last 12 months training for moments like this. “We have good training partners, so the level of our training is high and we can compete at a top level together.

“We are pushing each other to do our best every time we sail and that is really important.”

Tita and Banti's training partners Bissaro and Sicouri sailed through in second to confirm an Italian 1-2. Saxton and Boniface overhauled Gibbs and Chafee to win bronze.

The Men's 470, Women's 470, Laser, Laser Radial and Finn will sail their Medal Race on Sunday 10 June and they concluded their opening series after a long day on the water.

As many as six racers can finish on the podium in the Finn fleet and it's a who-beats-who to decide the gold medal. Jorge Zarif (BRA) tops the leaderboard on 32 points and is one clear of Josh Junior (NZL).

Alican Kaynar (TUR) remains firmly in the hunt on 39 points and Andy Maloney (NZL) is in with a strong chance of a medal as he sits fourth on 41 points. Jonathan Lobert (FRA) and Josip Olujic (CRO) will have their work cut out to move up but, as seen today in the Women's RS:X, anything can happen.

The remaining fleets returned to the shore just before 17:30 local time. More on their progress will be available on sailing.org shortly.

Medal Races are scheduled to commence at 11:00 local time on Sunday 10 June.