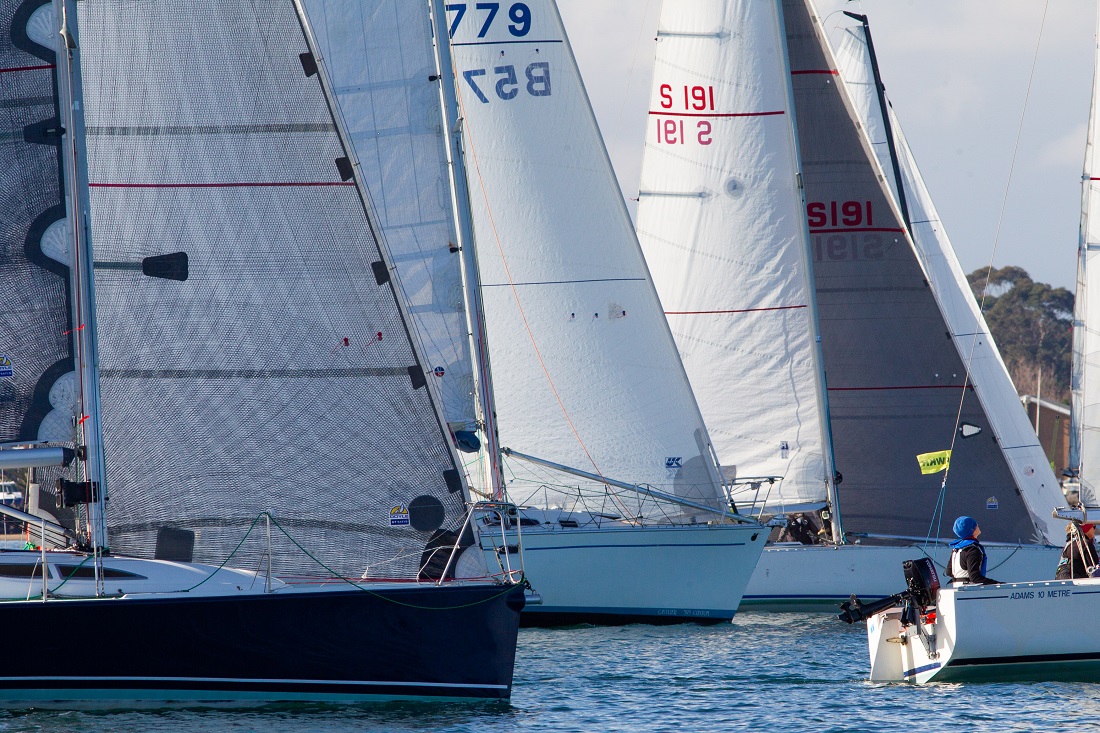 Competitors held out for nearly four hours waiting for wind to appear on Day 1 of the 28th Australian Women’s Keelboat Regatta being held on Port Phillip in Melbourne, but it was worth the wait when finally race officials from Royal Melbourne Yacht Squadron (RMYS) fired the start signal shortly before 2pm when a light breeze wafted in.

Nadine Huels from the host club skippered the Archambault 32, Remedy, to a win in Division 1 from Claire Heenan (NSW) at the helm of Jungle Juice, an Adams 10. A second Adams 10, Salamander III skippered by RMYS member Monica Jones, finished third. Less than three minutes separated the trio overall in the race that was shortened when the fleet was compromised by extremely light airs.

Huels, a novice skipper and owner of Remedy, was very pleased with today’s outcome, especially taking into consideration the tricky conditions: “Five knots is an optimistic estimate for the top end, but we got off the start well in clear and tactically we stayed closer to the shore, where there was more wind,” she said.

“We were able to tack and hold our course. Going downwind, we stayed close inshore again and got a bit lucky with wind. We looked like we were in a hole, but we weren’t, we had pressure coming from behind. It was a tactically difficult race, but Aurulie Chabrol, who called tactics, did a really good job. She’s also been a mentor to the entire crew, who are all from RMYS.”

Remedy was third around top mark, making all her gains downwind, again staying close inshore, to take the lead. However, Huels and the crew remain grounded. “We are just going to take one race at a time.”

With a dozen S80’s in Division 2, it was no surprise they dominated, taking out the top three places. The race was won by the Queensland crew on Recycled Reputation, skippered by Helen Warneke.

Jack Tar, steered by Deb Parker (Vic) finished second, while third went to the Cath Beaufort helmed Up ‘N Go from Victoria. Just over a minute separated the three over the line and on handicaps were applied, it was less than a minute, which shows good crew work from all. It will be a hard-fought for series.

Warneke said, “It came down to good crew work and good fleet racing. We had a very close race with Jack Tar, but we were literally only racing for clear air today – we didn’t want to get caught in the mix – and I think that’s why we won.”

It wasn’t as simple as it sounds either, as the breeze shifted 180 to 270 degrees throughout the race and only reached a top of 5 knots in between lighter breeze and glass outs. It meant everyone had to give it 100 percent concentration throughout.

“We didn’t have the best start,” Warneke admitted. “We got caught in dirty air, but tacked away as soon as we could for clear air, tacked back to cover the fleet and then just sailed for clear air.”

The Queenslander, who is at the helm of an S80 for the first time, skippered a J112 last year. “I saw how much fun the S80’s were having last year and we enjoyed the regatta so much, we decided to come back and sail the S80 this time,” Warneke explained.

“A big thanks to the Race Committee – they spent a lot of time trying to get it right for us. And thanks to the ‘Boat Buoys’ who have been on hand on each finger of the marina to help where they could and with any mechanical problems. We had a problem with our outboard and one of the guys was there with tools for us when we got back in. These are things that keep us coming back here,” she finished.

Although racing was due to start from 10am, the weather gods decided otherwise, with no sign of the forecast 12-14 knot north-westerly: “Gosh it is light here,” Allicia Rae, the event’s Sailing Co-ordinator said shortly after 1.00pm. “We haven’t got a race away yet.”

However, the ladies aboard the 27-strong fleet of mixed yachts found their own ways to while away the time, with lots of chatting, laughter and dancing aboard their vessels – assisted in their fun by a water show from a pod of dolphins.

Racing resumes from 10am tomorrow, but the forecast is not looking any brighter than today’s, which has already put the race schedule behind by one race. The final day, the Queen’s Birthday holiday on Monday, is looking better, when officials may try to hold three races to compensate.