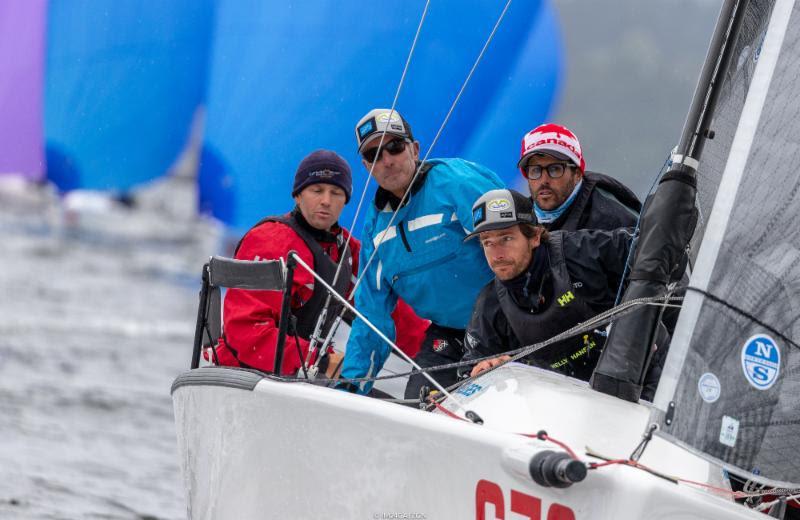 Victoria, Canada: It is eventually champagne sailing in Victoria on the penultimate day of the 2018 Melges 24 World Championship: the breezy conditions in the waters of Victoria's Outer Harbor allowed for the completion of two races and brought important changes in the overall scores with a discard in place.

Both today's races started with a General Recall rolling into a Black Flag, followed by some unpleasant penalties for several teams.

With two second places as results of the day, Bruce Ayres' Monsoon USA851 affirms itself not only as boat of the day, but also climbed to the top of the provisional rankings, by two points over the only entry from Italy, Altea ITA722 (Andrea Racchelli), with 5-8, results.

It means the Italian boat slips into second position overall, followed by Alan Field's WTF USA829, who steadily maintains the control of the third place.

Winner of the first race of the day was Michael Goldfarb's War Canoe USA825 that, thanks to this result, climbs up to fourth position in the overall ranking.

“We won the race that we can define one of the trickiest of the series, with huge wind shifts and massive currents,” Goldfarb said.

“We're sort of used to these conditions, since they are very similar on Lake Geneva where we train sometimes. At the gate we made the brave choice of sailing on the less crowded side of the race course, and this eventually paid off: we are only two points behind WTF, we'll see what happens tomorrow.”

The second bullet of the day went to Full Circle CAN415 by Robert Britten: the Corinthian crew, at the first success in the series of the 2018 Melges 24 Worlds.

“Today the team work we did on board brought us to score the first bullet of the Championship. From the bowman to the tactician, everybody on board did an awesome job,” Britten said.

“Despite a not excellent start and then many wind shifts, we raced on the furthest side of the race course and, after tacking, we found ourselves in a very good position. We're in podium area now, so tomorrow we'll do everything what's in our power to maintain this placement.”

The provisional top-three of the Corinthian division is still led by Matt MacGregor's Good Enough USA806, followed by the Canadians on board ADHD CAN184 by Brad Marchant and the above named Full Circle CAN415 by Robert Britten.

For the final day of the Melges 24 World Championship 2018 a forecast predicts stronger breeze. The battle will continue until the 2.30 pm when there's a time limit for the final race to start. The new Melges 24 world champions will be crowned.