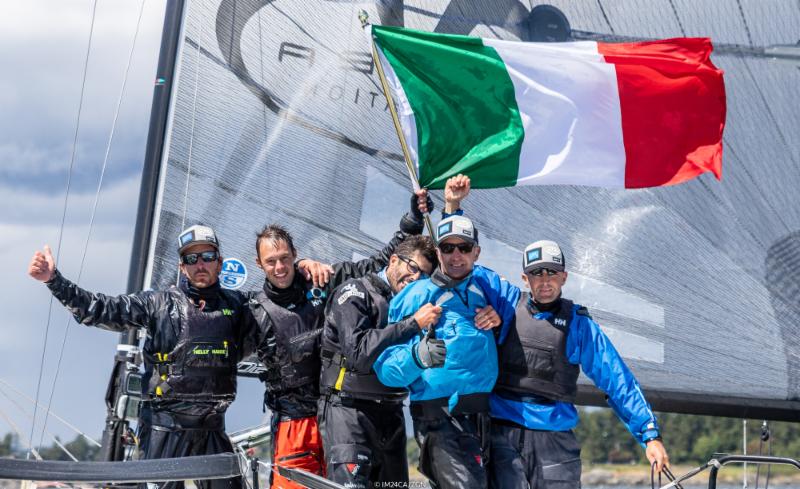 Victoria, Canada: On the final day of the 2018 Melges 24 World Championship the fleet of 41 teams from five nations finally received what they were expecting from Victoria – 15-20 knot winds, blazing sunshine, blue skies and great speed to put on the show while surfing the waves in Victoria Waterfront.

A final day of racing yielded three more races to conclude the 10-race hosted by the Royal Victoria Yacht Club in co-operation with the Canadian Forces Sailing Association and Victoria International Marina as a hosting venue.

The forecast predicted plenty of wind, and it was delivered. Twelve knots in the first race of the day was building to 15 knots for the second, and was filling in up to 20 knots, delivering wonderful champagne conditions – exactly the conditions the Melges 24 has been built for – and the fleet enjoyed three great races.

Nothing was confirmed in the leaderboard when entering to the last day of racing. The Italian crew has been able to sail very consistent races. They were the only crew with three bullets to their series, and discarded eighth as their worst, closing the series with a total of 30 points and a margin of 6 points over second place.

Monsoon with Mike Buckley calling the tactics and with Chelsea Simms, George Peet and Jeff Reynolds in the crew, were holding the lead position in the morning of the final day, but scoring 11th in the second race of the day put an end to their chances.

Meanwhile in Corinthian Division B, the local Royal Victoria Yacht Club team of Full Circle, crewed by Robert Britten, Graham Harney, Jose Grandizo, Liam Welgan-Gunn and Reid Cannon was successful. They defeated 24 other entries, despite being Black-Flagged in Race 3.

They were awarded with the Challenge Henri Samuel Trophy, which was donated to the International Melges 24 Class Association by Chairman of the Class, Henri Samuel. Until 2006, this trophy was awarded to the winner of the Melges 24 French Nationals.

Silver medallists were Matt MacGregor's USA team of Daryl Fitch, Genevieve Livingston, Kati Belden, Keith Hammer on Good Enough. They led until the final day when they slipped into second after scoring 28th and 26th results from today's races.

Winning Bronze was another local team of RVYC, Mike Bond's Hold My Beer with Gord Shannon, Mike Bassett and Sophie Stukas in the crew.

Hold My Beer team managed to jump to the third place of the podium from the penultimate day's fifth position.

Corinthian Division winner, Robert Britten, was also awarded with the Zarco Draganic perpetual trophy, which since 2015 goes to the owner with the highest ranking who is taking part in a Melges 24 Worlds for the first time.

The next International Melges 24 major event will be the Europeans, to be held in Riva del Garda, Italy from 3-10 August.