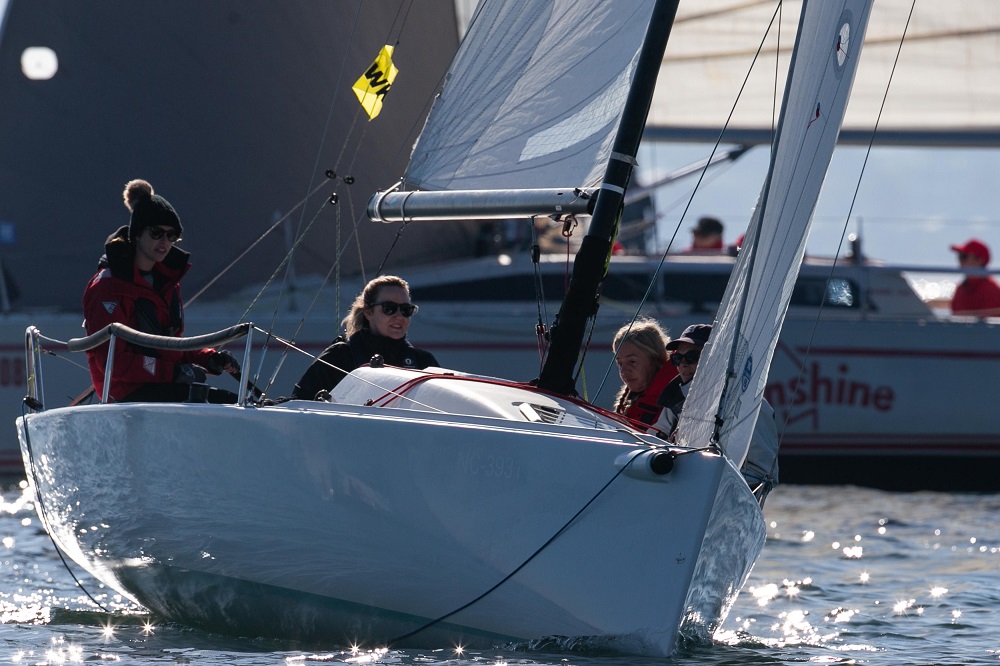 Race officials and competitors alike were pleased with their handiwork on the penultimate day of the 28th Australian Women’s Keelboat Regatta, as light winds of up to 5-10 knots held throughout the day allowing three races to be completed, bringing the schedule back in line.

The all-women crews again had to deal with shifty winds that oscillated between north/north-east, north-east and east-north-east in the Royal Melbourne Yacht Squadron hosted event. The first two races were sausage courses, while the last of the day was a triangle, giving good variety.

With a drop now in play, Spike, the J/70 skippered by Madonna Derks (Vic) has moved into a one-point lead in Division 1 without winning a race. This despite last year’s AMS Division 1 winner, Elyse Guevara (NSW) scoring bullets in Races 2 and 3 with the Adams 10 Cruiser, Scarlet Runner. Guevara is in form, having won the Adams 10 component of the inaugural Middle Harbour Yacht Club Women’s Regatta in Sydney last month.

However, as the age-old tried and true adage goes, consistency pays – and it did for Derks, who added 2-4-3 results to her seventh of yesterday, the latter now her discard.

Derks commented this afternoon: “We had an awesome day – yesterday was a little difficult for us, being so light – it was our ‘see how you go day’. Today the breeze suited us. We are a very light boat and a very light crew – just four of us. The way we distribute the weight around the boat is important.”

All three races in Division 1 were extraordinarily close and Derks surmises: “I think the first five or six boats are racing consistently well.”

She says because their boat is different (it’s a lighter sports boat), “We do look at the other boats, keep an eye on them, but we race our own race. Three of us have sailed together for a while, including doing this regatta three years ago. We just want to race with our friends and this regatta allows us to do that, which is amazing.”

With conditions for tomorrow’s final racing looking similar to today’s, the Victorian sailor says it should be another good day for them. “I think we’ll be racing the Adams 10’s in the fleet for the trophy.”

A second Victorian entry, the Summit 35, Vertigo, helmed by 17 year-old Clare Olding, has moved into third place after their Race 4 victory – a far cry from their dropped 11th of Race 3. New to keelboats, Olding is nevertheless an experienced dinghy sailor. Yesterday’s winner, Nadine Huels' Remedy, has fallen to fifth place, a fifth in Race 3 the best she could get from her Archambault 32.

In Division 2, the 12-strong S80’s dominated again. The crew from the top end of Australia, led by Jenny Simondson and representing Darwin Sailing Club, have shown what they are made of – Mood Indigo is in the lead.

Although the day did not start well for the Northern Territorians, with 12th in the first race of the day, their worst result for the regatta so far, Simondson bounced back with a win and a fourth to lead on countback to Jack Tar, skippered by Deb Parker (Vic) who came into the day in second place and stays there.

Parker’s best of the day, second in Race 4, has kept her crew within striking distance of the main trophy. Imaginer, skippered by Sandy Anderson, all the way from Royal Freshwater Bay in WA, is in third place and just two points shy of the leaders.

Commenting on their overall lead, Jenny Simondson said: “In the second and third races there was enough wind to give you a good race. Espresso (Rebecca Irwin) was with us every race and Take One (Katrina Hartman) was constantly at marks with us. It puts more pressure on the crew sailing against other S80’s, but mine really rose to the occasion and sailed well. Fiona McManus, our mainsheet/tactician has sailed the last five AWKR’s and organised the crews – including this year – she’s why we’re here.”

A self-confessed S80 junkie who would love to see winds between 12- 20 knots for tomorrow’s final, just to mix things up, Simondson cites Escape, Jack Tar and Imaginer as Mood Indigo’s main rivals for the Division 2 title. “I think they will be the ones we have to beat – and Espresso – they always seem to be around.”