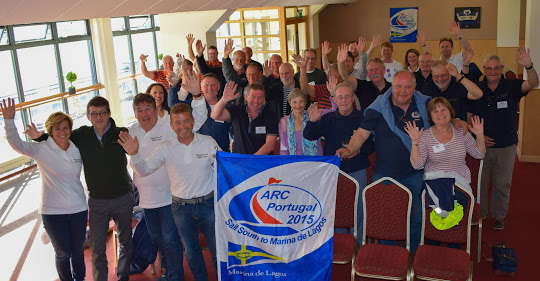 High winds and big swells that had moved through Biscay saw the start postponed from Sunday's planned departure and crews were content to spend the extra time in port after witnessing the force of the low pressure system from the haven of Mayflower Marina as the front blew through.

Conditions for the start on Wednesday 3 June were a stark contrast and crews were greeted by a blue sky and winds of 10-15 knots from the north-west, creating perfect conditions for the route out towards Ushant at 07:00 this morning.

With lines now cast off, the small but eclectic fleet have begun the longest leg of the rally, a 550 nautical mile crossing of the Bay of Biscay to Bayona. It was smiles all round as the yachts set off with the anticipation of developing good winds after a calmer first few days to find their sea-legs. For many crews this is their first long offshore passage and marks the beginning a summer of long term live-aboard cruising towards the Mediterranean and beyond.

Before departure, all yachts joining the rally were given a safety equipment inspection by the experienced World Cruising Club team and fitted with YB satellite trackers so that friends and family can follow their progress via the rally website. Briefings and socials helped fill the pre-start programme extended for the weather delay. However for some crews it was a welcome extra few days to prepare for the Biscay crossing.

2015 marks the 21st edition of ARC Portugal (formerly Rally Portugal) and combines a cruise in company with an exploration of northern Spain and Atlantic Portugal en route. While the itinerary has changed slightly over the years as new marinas have developed, the ethos of a social cruise with exploring ashore and afloat has remained strong. The 2015 route features stopovers in Bayona, Povoa de Varzim, Porto, Figueira da Foz, Peniche, Oeiras and Sines, before reaching Marina de Lagos at the gateway of the Mediterranean – an ideal finishing point for a summer of cruising.

ARC Portugal will be the second World Cruising Club rally to visit Marina de Lagos in June, as yachts taking part in ARC Europe will complete their west to east transatlantic crossing at the marina just a few days ahead of the coastal cruising fleet. ARC Europe departed from Nanny Cay in the British Virgin Islands three weeks ago and the fleet is now making landfall at the island of Faial in the Azores. Before the final leg of their ocean crossing to mainland Portugal, the 30 boat fleet will sail to four of the nine islands in the Azores archipelago: Faial, Terceira, São Miguel and Santa Maria, with the opportunity to visit Pico by ferry. Each island is very different to the next and crews enjoy the time to explore these islands for two weeks rather than use them as solely a re-fuelling stop part way across the Atlantic.

Hosting both rally fleets, a total of almost 40 boats sailing with World Cruising Club rallies will visit Marina de Lagos which is celebrating its 21st year of operation in 2015. Renowned as one of the premier marinas on the Portuguese Atlantic Coast, situated close to the Algarve and with modern, secure berthing and boatyard facilities, the marina has warmly welcomed World Cruising Club rally participants for two decades. Whilst the fleets of ARC Europe and ARC Portugal are differ in their place of origin, fleet size and duration, both will receive a wonderfully warm Portuguese welcome at Marina de Lagos and share wonderful
memorable sailing and social experiences en route.