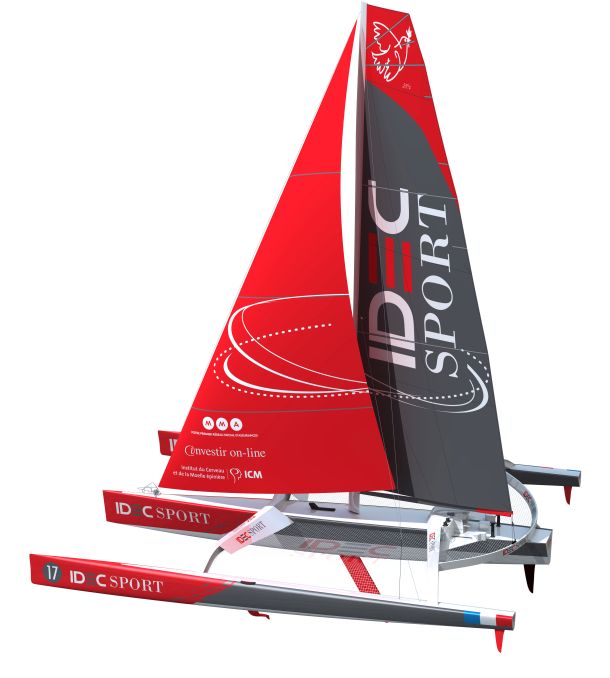 Since 2008, he has held the solo round the world record, but now Francis Joyon at the age of 59 is about to attempt what would be a historic double in the history of ocean racing. The skipper of the IDEC SPORT maxi-multihull will be attempting his first crewed record and going straight for the big one: the outright crewed round the world record (Jules Verne Trophy), which is currently held by Loïck Peyron with a time of 45 days. To take up this new challenge, Joyon will be setting off aboard Franck Cammas’s former Groupama 3, the boat that took the Jules Verne Trophy in 2010, as well as winning the last two editions of the Route du Rhum. This new maxi-multihull displaying the colours of IDEC SPORT will be tackling the round the world record with a short-handed crew on a sort of commando raid. The new race programme drawn up between the skipper and his partner, the IDEC Group for the coming years, will in particular enable Francis to open up a new sailing route, wh! en he sets off in late 2016 to establish a new ocean racing record between France and China.

45 days 13 hours 22 minutes and 53 seconds
That is the reference time Francis Joyon is aiming for. The Jules Verne Trophy reference time set in 2012 by Loïck Peyron and his crew aboard Banque Populaire V. The crewed round the world race via the three capes (Good Hope, Leuuwin and the Horn), the Jules Verne Trophy had had sailors dreaming since 1993 and the initial reference time set by Bruno Peyron and his men with a time of 79 days 6 hours 15 minutes and 46 seconds. Twenty two years on, Francis Joyon will be tackling this legendary record, which certainly has a hold over him. “I have closely followed all the attempts since 1993,” he told us. “Each time I felt admiration for the sailors setting off with a crew around the world. Now it’s my turn to tackle this amazing adventure.” Joyon certainly knows his way around the world having sailed it twice alone and on both occasions smashing the outright recor! d. His performance in 2008 (57 days 13 hours 34 minutes and 6 seconds) is still the record today. At the time, he even managed to achieve the second best time ever, including the time achieved by a crew. Today, only Orange II in 2005 (50 days), Groupama 3 in 2010 (48 days) and Banque Populaire V in 2012 (45 days) have done better And that was with more than ten men on board…

A new challenge, a new boat
The former Groupama 3, which became Banque Populaire VII, the new IDEC SPORT maxi trimaran has achieved a remarkable set of results: the holder of the Jules Verne Trophy from 2010 to 2012, the boat also won the last two editions of the Route du Rhum in 2010 and 2014 when in the hands of Franck Cammas and then, Loïck Peyron. Nine years after being launched, this good all-round multihull has a fine future ahead of her in the expert hands of Francis Joyon. “Attempting to grab the Jules Verne Trophy is going to be all the more exciting, as I shall be discovering a boat that is bigger than my previous IDEC trimaran (31.50m as opposed to 29.70m), with a huge potential for speed,” said a very pleased Francis. “Groupama 3 sailed around the world in 48 days with weather conditions that were far from ideal. The boat has the potential to shave a few days off that time and improve on the cu! rrent record. It’s all very promising.”

A smaller rig and a smaller crew
Francis, the solo record-breaking sailor, is a newcomer to crewed racing. Sticking with his principle of simplicity and efficiency, he has opted for a smaller rig on his new trimaran, a configuration usually associated with solo sailing. This choice means he will have a smaller crew at his side with a maximum of six people on board for the Jules Verne attempt. In comparison, there were ten on board Groupama 3 and 14 on Banque Populaire V.

“The smaller mast is more efficient and offers better performance when the wind is above twenty knots and it enables the boat to be safer and to cut through the water better. On top of that, having a smaller crew means the way we work on board will be simplified and we can go for a light weight approach. As she is so light, the new IDEC SPORT trimaran is a like a jet fighter,” explained Joyon.

Stand by from November
Francis Joyon will be getting hold of his IDEC SPORT trimaran in mid-September. He has a very busy schedule coming up, as the best time to go on stand-by for the Jules Verne Trophy is in early November. At the same time, another maxi trimaran will also be there waiting: Spindrift 2, the world’s largest ocean racing trimaran, which is none other than the former Banque Populaire V, the Jules Verne Trophy record holder. A monster packed with power alongside which will make the new IDEC SPORT maxi trimaran look tiny with her 31.50 metres and smaller rig. The battle between the last two boats to hold the Jules Verne promises to be fascinating. Particularly as both boats have the potential to smash the current record.

IDEC SPORT opening up to car racing
The latest project from the IDEC Group also includes entering the car racing circuit. IDEC SPORT is in fact a merger between two units, which have always been separate before, in spite of having so much in common: ocean racing and motor racing. A driver and car racing enthusiast, Patrice Lafargue, president of the IDEC Group has set up the IDEC Sport Racing Team, which is competing in two circuits in the VdeV Championship (in the GT and Prototypes) and in the 24-Hour Series. Already this year, four cars will be representing the new IDEC SPORT RACING team, which will become even bigger in the coming seasons, with the goal of taking part in the Le Mans 24-Hour Race in 2016 or 2017. Patrice Lafargue explains, “I took the decision late last year to take over the Ruffier Racing team as a private individual and to form the IDEC Sport Racing team. We have invested in men and material, which has enabled us to compete with four cars. This year,! the aim is to get the team up and running, but we are also hoping for some more good results. Last year with my son, Paul we were the champions, and now the goal is to win at least on of the three championships in which we are involved. After that, I hope to go further in terms of racing in moving up to tougher circuits and aiming to compete in the European Endurance Championship and the Le Mans 24-Hour Race.“