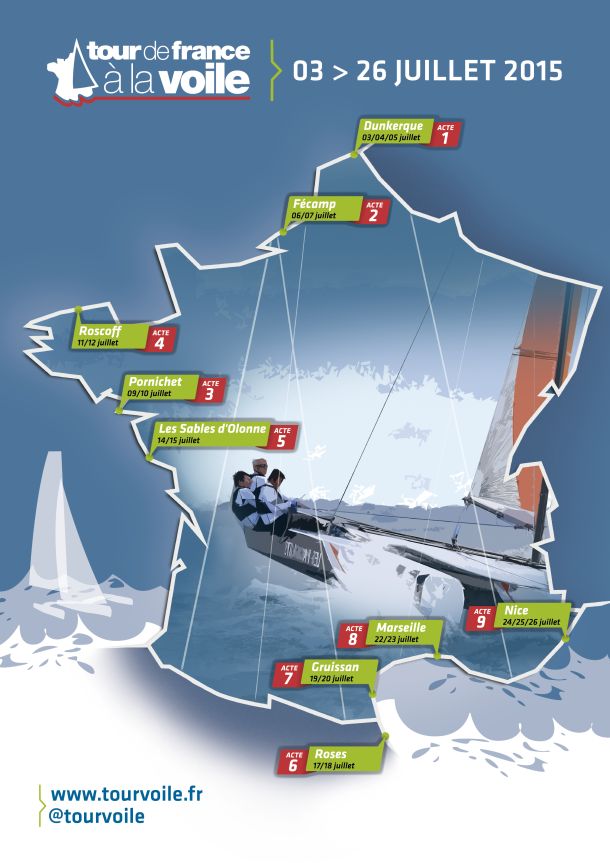 Today in Paris saw the grand unveiling of the Diam 24 line-up, which will participate in the Tour de France à la Voile this summer. Some 29 crews will set sail from Dunkirk on 3 July!

The great diversity of the line-up will enable onlookers to witness today’s top skippers and crews doing battle on an equal footing. As such, it promises to be a sumptuous spectacle along every one of France’s seaboards given the extent to which the new trimaran has captured the imagination during the pre-season events. Indeed the Diam 24 has already proven that it is the perfect medium for getting up close to the public audience and ensuring some hard-fought races. This very special edition of the Tour de France à la Voile is sure to mark an era and it promises us three weeks of truly gripping action!

A choice line-up that brings the whole sailing domain together

With nine coastal adventure challenges and 45 races in the nautical stadium on offer, the programme for the Tour de France à la Voile 2015 is no fitness trail. It’s a marathon contested at the pace of a sprint event that awaits the skippers and crews from Dunkirk and beyond. A team marathon where the key to success will likely involve remaining on the alert both tactically and mentally throughout the three packed weeks of races.

Cammas (Groupama), Beyou (Maitre Coq), Lemonchois (Prince de Bretagne), Stamm (Cheminées Poujoulat), Riou (PRB), Guichard (Spindrift), Tabarly (Armor Lux – Comptoir de la Mer), Souben (Sodebo) and Pavant (Made in Midi) form part of the headline acts. For the most part, the skippers are keen to combine their experience as offshore racers with other sailing talents. Furthermore, it is not uncommon to find alongside them sailors with less familiar faces, albeit with a track record as long as a windless day.

Current members of the French Olympic Sailing Team and former protagonists from the Olympic Games in Athens, London or Beijing have come to flesh out the crew lists. The bulk of the key match racing specialists has also been recruited, regularly topping the leaderboard in the pre-tour period, as is the case for Combiwest skippered by Fred Guilmin. Sébastien Rogues boasts one of the best match racers in the world aboard ENGIE: Mathieu Richard.

The arrival of the Diam 24 also sees the female sailors return to the event. In this way, the all-women’s crew of Agrival skippered by Pauline Chalaux will take the start, as will Alexia Barrier, skipper of 30 Corsaires. The Figaro sailors are still out in force too, including Fred Duthil (Grandeur Nature Vérandas) and Nicolas Bérenger on Beijaflore Sailing.

Antoine Carpentier (Le Souffle du Nord), a familiar figure of the Tour de France à la Voile, has moved up from the status of crew to that of skipper. Another connoisseur of the event, Jean-Baptiste Gellée, a member of the APCC Voiles Sportives, will be at the helm of Radio Vinci Autoroutes. Both have quickly got their bearings aboard this new craft. Meantime Mathieu Moures has just launched his Diam 24 Martinique. We’re keenly awaiting the return of this sailor from the West Indies, who was absent from the circuit last year.

There are also a number of sailors who are taking on the role of skipper for the first time and some are completely new to the Tour de France à la Voile including Benoît Champanhac (Défi YC Saint-Lunaire), Emeric Dary (Dynamique Voile), Arnaud Daval (Techneau), Quentin Delapierre and Matthieu Salomon (Vannes Agglo-Golfe du Morbihan), Simon Moriceau (West Courtage-Ecole Navale), Bruno Staub (Lorina Boissons Artisanales) and Charles Hainneville (Normandy EliteTeam). This is also the case for Loic Féquet who will be getting young sailors from Dunkirk sailing and training aboard Dunkerque Voile.

There are some highly original projects too, such as that of Damien Seguin (Fondation Française des Jeux – Des Pieds et des Mains), which combines able-bodied and disabled sailors, or that of freeride skiing specialist Aurélien Ducroz (La France du Nord au Sud), all of which are likely to inspire both the media and the public, who we expect to flock to the various venues between Dunkirk and Nice.

The latest crew to sign up is the Australians on Team Oz (Brett Dryland and Rob Waterhouse), who are preparing in the southern hemisphere before making for Europe.

The Tour is definitively turning a new page then and with 35 days to go till kick-off, there’s a real buzz among the crews and the organisation teams.

“Our aim with the Diam 24 was to offer a boat, which enables a very high standard of racing and is accessible in terms of budget. It is also a boat that enables us to really share the sailing with the public. What we’ve seen of the competition so far has thrilled us. The skippers and spectators also seem happy. We’re extremely proud of the line-up we’ve announced today. We are guaranteed of an exceptional show out on the water and we can’t wait to get to Dunkirk,” commented Jean-Baptiste Durier, Director of the Tour de France à la Voile in front of a large gathering at today’s presentation.