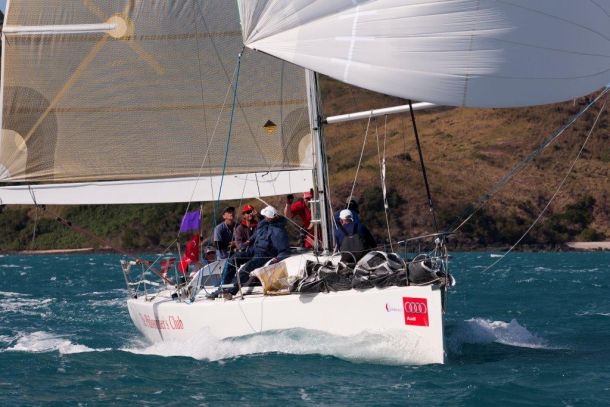 World 18ft skiff and ocean racing champion, Peter “Soro” Sorensen, has established an impressive milestone for Audi Hamilton Island Race Week 2015 by registering his yacht, The Philosopher's Club, as the 50th entry for this year's regatta.

Sorensen will be making his ninth visit to what is Australia's premier yachting event. He said there were two reasons for being at the regatta this year: there is no better place in the world to sail, and he wants to win his third Australian IRC championship, a series that will be part of Race Week 2015.

“I’ve been to regattas all over the world, and there’s nowhere more beautiful, or more suited to sailing, than around Hamilton Island,” Sorensen said. “That alone is enough to get us there, but the fact that the Australian IRC Championship will be decided at Race Week, and that the social scene promises to be better than ever, is the icing on the cake.”

Prior to getting into keelboat racing, Sorensen, who will soon turn 73, was a legend in 16ft and 18ft skiff racing. His greatest achievement was two consecutive 18-footer world championship wins, in 1983 and 1984, sailing Tia Maria.

Sorensen, who also has four Rolex Sydney-Hobart races as a yacht owner to his credit – including the tragic 1998 race where he finished 13th across the line – continued on his winning way recently with The Philosopher’s Club sailing to victory in IRC Division 3 of the Sydney Harbour Championship. The yacht is a Sydney36CR production design which was completed to Sorensen’s specifications. She was launched in 2008 and won the Australian IRC championship soon after. The yacht was recently modified with the addition of a “sugar scoop” stern.

The crew for The Philosopher’s Club at Audi Hamilton Island Race Week 2015 – which will be staged from August 15 to 22 – will comprise mainly retired skiff sailors, including seven-time 18ft skiff world champion, Andrew Buckland.

Audi Hamilton Island Race Week 2015 Race Director, Denis Thompson, reports that he is impressed by the rate entries are being lodged for this year’s regatta.

“We are ahead of last year’s graph, and the signs indicate it will continue to stay that way,” Thompson said. “I won’t be surprised if we see a fleet of more than 200 this year.”

Yacht owners and crews planning to be at Audi Hamilton Island Race Week 2015 are reminded that Hamilton Island is offering special ‘Early Bird’ accommodation rates for the regatta as a bonus to all competitors. Details are posted on the regatta website, along with all other information relating to the regatta: www.hamiltonislandraceweek.com.au

In 2015, Audi Australia returns as the principal sponsor of Audi Hamilton Island Race Week for an incredible tenth year.  Over the past decade of partnership, Audi and Hamilton Island have worked hand-in-hand to create the most impressive sailing regatta in Australia, with even more activities on offer for sailors and onshore guests alike. This shared vision is based on a joint passion for winning performance, technological innovation and spirited competition.