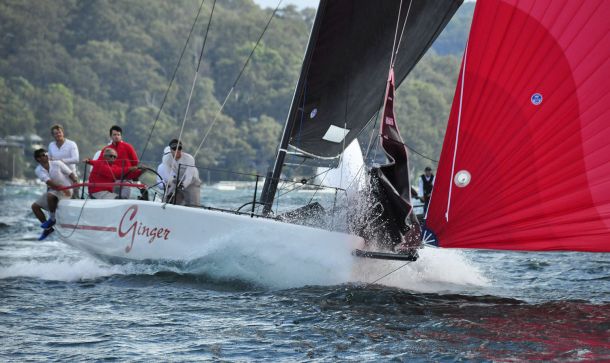 For the second year running Leslie Green’s MC38 Ginger sliced and diced the one design pack contesting the class’ Australian Championship on Pittwater to the north of the Sydney CBD.

Accepting the championship trophy in front of his classmates Green repeated the words of the late great Richie Benaud in character: “‘It was marvellous’. I had a great time and I’ll be back again next year, God willing. Today was a special win because we were defending. Over the series we stuck to the fundamentals; it was ‘steady as she goes’” said a grinning Green. He speaks often of the harmony on board and reiterated this afternoon, “We are a very happy team, we have fun and that is part of the reason we win.”

Practice is the other reason. The full race crew train every Monday night with the Cruising Yacht Club’s Monday twilight series.  “We train as if we are racing and it’s really helped us,” said tactician David Chapman.  He says the momentum shift came following a fifth in the last race on day one, Friday April 10, 2015, their only non-podium placing. “We had a really good debrief about what we needed to do from that point.” Today’s victory is the third consecutive national MC38 title for Chapman, two with Ginger and one with Voodoo Chile.

Adam Beashel, tactician on the runner up Hooligan said, “We came here to win and we set ourselves up on day one for it but Ginger found second gear in the last two days. Hats off to them, they gave us a lesson at times. We’ll go back and study a bit harder. Credit to our guys too, the crew is coming together and pulled us out of a few tricky situations.”

John Bacon congratulated Leslie and his crew for a brilliant job. “We didn’t make it easy on ourselves getting a seventh this morning. Still, we had a great time,” the class President summed up.

Weather-wise finals day threw plenty at the eight crews and the owner-drivers. As the breeze clocked left from south to sou’east then back to south Principal Race Officer Steve Merrington switched the race track left then right and back to left to accommodate.  Races eight and nine ran in balmy conditions and 6-8kt south to sou’easters and by the closing race 11, a cold 20kt plus southerly howling down Pittwater had the fleet on the edge and the spray flying.

“Some of the time it was exhilarating, other times it was a bit dodgy and some of us were expecting the carbon on carbon crunch,” said Robin Crawford, skipper of Assassin, reflecting on his series. Daughter Clare who is doing the hard yards on the bow added, “it’s moderately depressing to come last in almost every race. Our aim was not to be last, and we did achieve that. We are a bunch of mates who go sailing. There’s a huge amount to learn,” she acknowledged.

It was a relief for the PRO to finish a full series with a great breeze given yesterday’s drawn-out start and another testing delay in the middle of today’s four races. “I particularly enjoyed the fabulous starts …they were all on the line. The class offers fantastic close racing and they are thrilling to watch,” Merrington said.

Harken Australian and Lejen Marine sponsored the national title and ongoing supporters of the MC38 class, McConaghy Boats and RPAYC, contributed generously to its success.

The next event for the MC38 class is the Autumn Regatta on May 9-10, 2015 on Sydney Harbour, the second of a first-time five part season championship that wraps up in November.