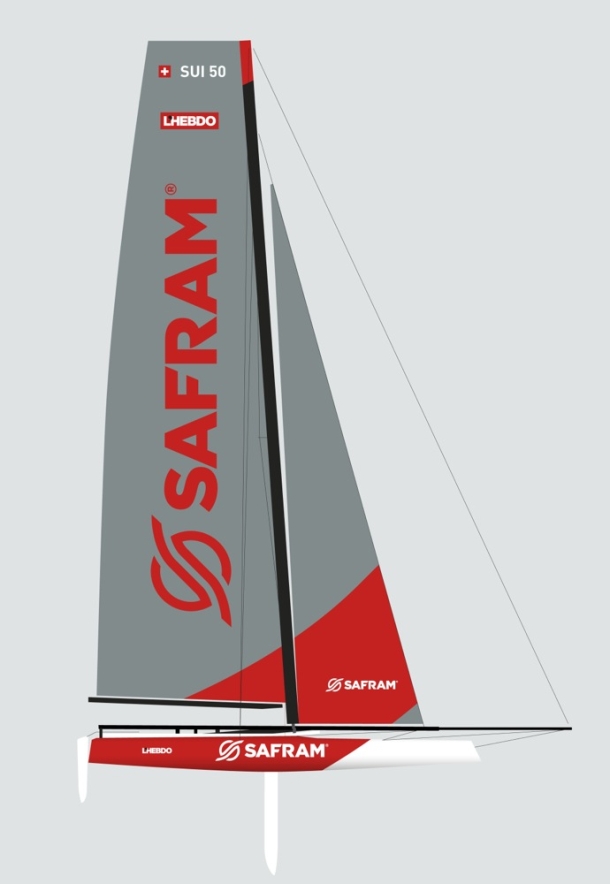 The high tech 35 foot Ventilo M1 multihull Zenith has been rechristened Safram (SUI50) for 2015 and chartered by Rodolphe Gautier to celebrate the 50th anniversary of the Swiss pan-European transport company of the same name. The new Swiss sailing campaign is to take on some of the most prestigious long distance events in Europe in 2015.

The season kicks off in June on Lake Geneva with the Genève-Rolle-Genève, swiftly followed by the Bol d’Or Mirabaud, before the racing moves to Hungary for the Blue Ribbon (Kekszalag) on Lake Balaton in July and finally Italy for the Trofeo Gorla and the Centomiglia on Lake Garda in August and September.

“The goal is to race the key European long distance lake-based events as these boats don’t have their own championship series on Lake Geneva. We will dismantle and reassemble the boat to transport it by lorry across Europe and have planned a few modifications to make the operation a bit easier,” explained skipper Rodolphe Gautier who has gathered a passionate multihull team around him.

The project came about by chance at the end of 2014 and the crew will sail the boat for the first time at the beginning of May. “Despite little preparation time, our fully amateur crew will be pushing as hard as possible with the hope of doing Swiss sailing proud at regattas such as the Bol d’Or Mirabaud that draw hundreds of competitors,” added Gautier.

Traditionally, the Bol d’Or has attracted Hungarian and Italian teams : “It is our turn to visit their countries and race their races!” said Gautier. “And if our privileged experience means we can create synergies between race organisers to improve on how we host foreign teams, then that can only be a good thing.”

The multihull will carry the colours of Safram, a Swiss pan-European transport company that is not entirely new to sailing having sponsored an M2 team and the M2 circuit for several years. “We are celebrating our 50th anniversary this year,” said Safram associate director Tito Fornasier. “Sponsoring this boat is an excellent way to celebrate our jubilee and it is natural for Safram to partner a Swiss project in Europe. We will transport and store the boat in a trailer which will be at the team’s disposal throughout the season and across all four corners of Europe.”

The team will represent the Société Nautique de Genève.