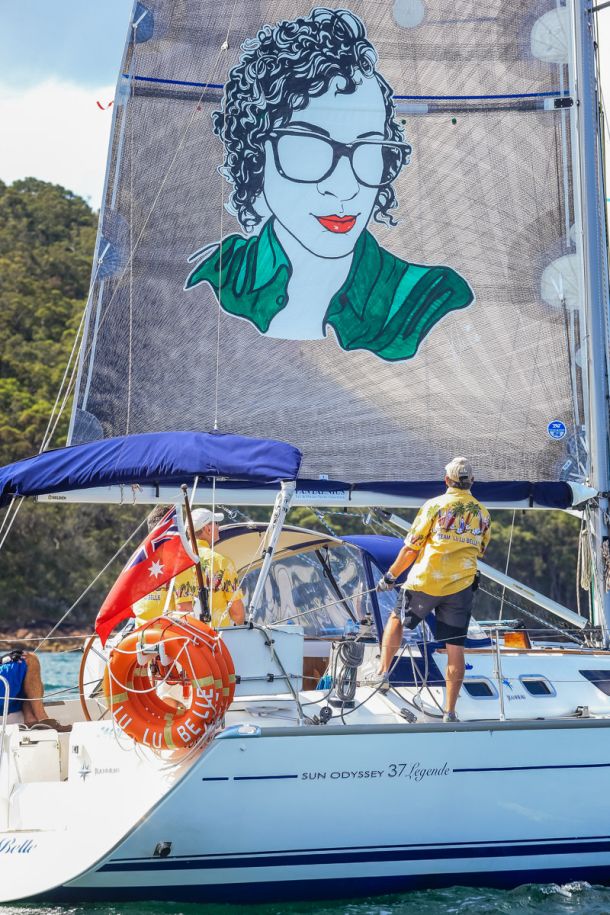 Hawaiian shirts, fake parrots, blow up palm trees and kids on board and steering is all part of the fun and relaxed nature of the Commodore’s Cup. A trophy at the end of a glorious autumn day race seems a bonus.

There’s an interesting rivalry between Lake Macquarie boat JAB and sistership Schouten Passage from Newcastle. Rob Howard is crewing on JAB and wife Jan is skippering the family boat Schouten Passage with an all-women crew who call themselves the ‘skirts’. “It’s creating an interesting dynamic in the fleet,” smiles Jan. Having finished today’s opening race a little quicker, Rob, the good sport he is, greeted the ‘skirts’ crew on the dock and helped secure the lines.

It’s the ‘skirts’’ goal to score as well as they can in the Commodore’s Cup before the boat is turned over to the Howards’ eldest son Richard and his crew for the more serious side of the week-long regatta, the NSW IRC Championship that starts Friday April 17 to Sunday April 19, 2015.

The ‘skirts’ work informally with Newcastle Cruising Yacht Club to encourage more local women into sailing, and keep them in the sport. For their last club twilight race two boats fully crewed by women plus others among the fleet added up to an impressive 19, all a result of the program’s good work.

At Sail Port Stephens the full female crew is dressed in matching gear, right down to the red shoes. “The problem is when you look good you have to deliver. We weren’t looking so famous a couple of times but all in all we had a good day,” Jan added. Unfortunately or fortunately the event photographer Craig Greenhill snapped the moment Schouten’s spinnaker went ‘prawning’ off the back of the boat. And they weren’t the only ones caught out by the camera.

There are crew uniforms on Paul O’Rourke’s Margaritaville and Peter Lewis’ Lu Lu Belle and the pair battled for both fashion supremacy and first to the finish in today’s race on Nelson Bay.

There’s nothing like a Hawaiian shirt to brighten up a yacht race and the two crews dressed similarly were drawn to each other on the track. “We saw Lu Lu Belle and thought hey there’s others dressed almost as good as us,” O’Rourke said adding, “during the race Peter and I did call out to each other about introducing a Hawaiian shirt division..a bit like the Corinthian division.”

And for the record Margaritaville beat Lewis’ team over the line by half a boat length, though they were pipped on handicap.

Stepping back from organising duties means this is the first year since the inaugural Sail Port Stephens in 2008 he co-founded that O’Rourke has been able to compete with his Swarbrick 38. “The view is much better on this side of the fence!” he declared this afternoon. Daily morning briefings and afternoon trophy presentations are still on his job list and the leave pass only applies to the Commodore’s Cup. For the Port Stephens Trophy and NSW IRC Championship O’Rourke will be back on full official duties on the mark boat laying courses for the strong fleet coming to decide two new state champions.

Putting the Commodore into the Commodore’s Cup is the current Corlette Point Sailing Association Commodore Brett Schultz who is on board with O’Rourke, the founding club Commodore. Immediate Past CPSA Commodore Dom Grundy is hoping to also step away from organising duties as Sail Port Stephens event manager and join the motley pirates on Margaritaville at least one day during the Cup.

Kerinda was the first division two entry to complete the scenic course and first to the finish line in division one was Colortile closely followed by Toy Story.

Tomorrow’s forecast is for south to south-easterly winds 10 knots becoming east to north-easterly. Principal Race Officer Denis Thompson is making plans for another inshore race on the bay then an islands race offshore on Wednesday if conditions are suitable for yachts to cross the Nelson Bay bar.