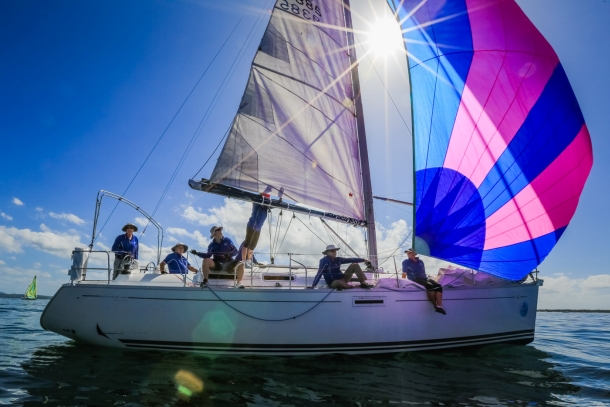 For the locals and non-sailing visitors wandering the Nelson Bay foreshore, today’s Commodores Cup race, the second in the series, might have appeared an aimless exercise. For the sailors, a long procession of boats of all sizes parading up and down off the town centre for hours made perfect sense as they fixed their sights on the course designed to maximise the forecast conditions, and worked hard to beat each other and the clock.

A morning westerly for the 11am start off the harbour wall eventually dialled around to a light afternoon easterly breeze. In the transition phase two divisions of some 40 yachts were parked up and drifting around pointing every which way. Some lost steerage and those crews had to fend off other boats in the same predicament to avoid a gentle bump.

Peter Lewis, skipper of Lu Lu Belle and media machine, managed to get himself in the day’s story with this radio transmission to the race committee; “I just want you to see that Lu Lu Belle is out-sailing the fleet backwards.” Indeed it was, the heavy Jenneau drifting backwards as the fleet already around the top mark carried down to them in the new easterly breeze.

Early contemplations of shortening the course by Denis Thompson and his race committee went by the wayside as the easterly filled in to a fairly consistent 6-8 knots. Then it became about current, up to three knots at maximum stream. Depending if it was the up or down leg, boats either appeared on a conveyor belt or close to stationary for those going the opposite direction and pushing painfully into tide.

The last to finish, Chris Bebb’s Swanson 32 Jia just scraped in by the time limit having traversed the foreshore for more than five hours on a picture perfect day.

For Tom Woods’ Lake Macquarie based Farr 36 Toy Story, stopping and starting hurt the lightweight design as Woods explained, “the bigger boats have the momentum to carry through to the next pressure. We won the start and the first two legs then parked and the fleet sailed up to us in the new breeze then passed us. We weren’t out there as long as some though.”

Lauren Connors helmed her dad’s Jones 39 called Arch Rival, a division one entry, in the tricky tidal conditions. It’s the boat’s first Sail Port Stephens and Connors says the week away racing on Nelson Bay has so far been a terrific alternative to work.

She’s used to driving the 39-footer, she and dad Steve share helming duties racing out of their club at Drummoyne in Sydney. The boat is 20 years old but it’s been well cared for. When he bought Arch Rival from its previous Melbourne owner two years ago Steve did have a new insignia added, to reflect his heritage. A Tiki in haka pose decorates the yacht’s hull and Lauren says Arch Rival was kept as the boat’s moniker to reflect the good natured rivalry between Australia and New Zealand.

Rather than beer and pies the crew of High Voltage – a brand new Oceanis 35 that’s so new the crew had to check the transom for its name – took the opportunity of a quiet day to enjoy quiche and white wine, fare perfectly matched to skipper Micah Lane’s Panama hat and desert boots. “That’s how they do it at Beneteau,” said visiting trimmer Nicholas Bedggood. His takeaway from the day was the concentration required given the technical nature of wind versus tide. “We had to think out there and we worked hard for a result.”

Phil Arnall’s Farr 40 TP73 from Newcastle Cruising Yacht Club took out division one first place ahead of Derek and Martin Sheppard’s Black Sheep and Kristy and Warren Buchan’s Colortile from down Cronulla way.

Tomorrow’s forecast is brighter, north to north-easterly winds 10 knots increasing to 10-15 knots early in the morning and building to 20 knots offshore south of Port Stephens in the late evening.

Pantaenius’ major sponsorship of Sail Port Stephens continues for the second year and the annual regatta organised by the Corlette Point Sailing Association is proudly supported by the NSW Government through its tourism and major events agency, Destination NSW.