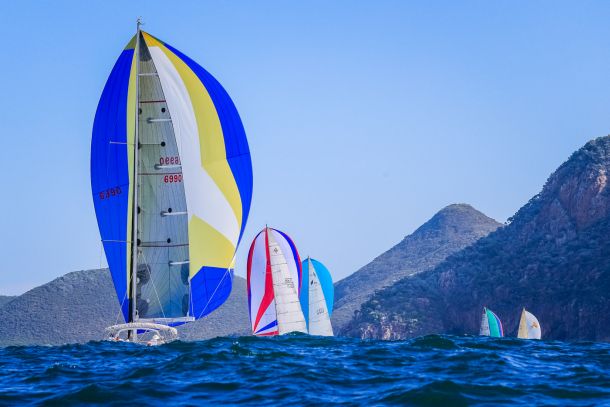 The owner of the first boat to register for the 2015 Sail Port Stephens regatta is “chuffed” to be taking home top divisional honours by the narrowest of margins in the completed Commodore’s Cup series.

“We had been looking forward to the regatta for a long time,” said an excited Griffin having just seen the final scores. “We had a ball last year, even in the rain, so we booked the same house and we were the first to enter this year. We’ve enjoyed the Commodore’s Cup immensely, Kerinda gave us a great tussle all three days and socially it’s been excellent. We’ll be back again next year!”

The fun isn’t over for Al Fresco. They’ll take a break along with other crews for a layday tomorrow and be back out on Friday for the second half, this time racing in the Performance Cruising division with many of the same boats and faces.

Division 1 of the Commodore’s Cup was taken out by Mark Skelton’s Beneteau 40.7 called JAB, their lead a little more comfortable than Al Fresco’s at three points clear of the second placegetter, Steve Connor and his 39-foot Jones design called Arch Rival from Sydney.

“Last year was our first year and we won Performance Cruising division. This year we decided to do the whole regatta,” said Skelton. “Today was lovely; we had a great start and first beat that carried us through. It’s very unique and different sailing around islands as course marks compared to racing around the buoys. You can get trapped in no breeze under them.”

Skelton and JAB sail for Wangi Amateur Sailing Club on Lake Macquarie and on board racing for Newcastle Cruising Yacht Club is trimmer Rob Howard, the other half of the Schouten Passage partnership. Jan Howard and her ‘skirts’ crew weren’t able to get near sistership JAB’s final top scoring result with Schouten, but they seemed to fulfil the fun quota set prior to the opening race on Monday.

Skelton are his crew are staying on at Port Stephens for the Performance Cruising series starting Friday through to Sunday April 19, 2015 and the skipper says he’s very comfortable with the building forecast.

Last year’s rainy Sail Port Stephens is a distant memory, replaced by a third magic day of sunny skies, a top temperature of 26 degrees and 10-12 knots of north-easterly breeze outside the heads, less inshore which was perfect for the first of the two day Junior One Sail Series just off the Port Stephens Sailing and Aquatic Club at Soldiers Point. Kids in BICs, Optimists, Laser Radials, Laser 4.7s and Sabots completed two races on flat water with a fair bit of woo-hooing and the odd crash in the pre-start. Harry Bailey’s Open BIC called Newcastle Yacht Club leads the series.

This evening many of the 40 Commodore’s Cup crews will gather at the Nelson Bay Bowling Club for dinner and official trophy presentation.

Tomorrow, Thursday April 16, is a layday for the keelboat fleet prior to the opening of the second stage Port Stephens Trophy incorporating the NSW IRC Championship on Friday 17th.