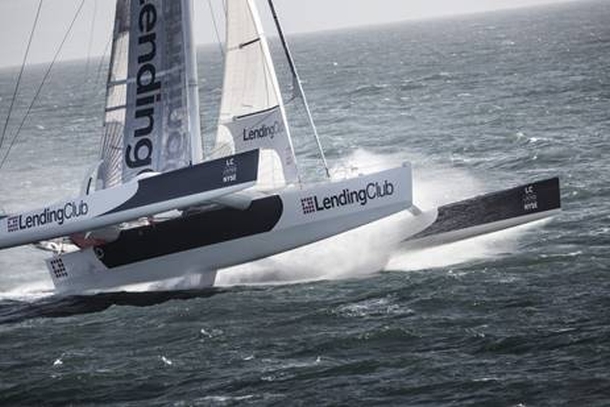 Just two weeks ago the maxi-trimaran Lending Club 2 set a new world sailing speed record on the English Channel: from Cowes, on the Isle of Wight, to Dinard, France.  Driven by Renaud Laplanche, CEO of Lending Club, with co-skipper Ryan Breymaier, the 138-nautical mile passage was completed in 5 hours and 15 minutes at an average speed of 26.36 knots; shaving 8 minutes off the record that had stood since 2002.

Now prominently berthed at the Newport Shipyard, the attention commanding 105-foot Lending Club 2 and her crew are in preparation mode for their next challenge:  the 635-nautical mile Newport to Bermuda course record.  The current record, which has stood 15 years, is held by Steve Fossett who set a time of 38 hours, 35 minutes and 53 seconds – at an average speed of 16 knots – with the 125-foot catamaran Playstation in 2000.

One Down, Two to Go
Laplanche chartered the racing yacht for the 2015 season with the express goal of conquering three speed sailing records:  Cowes-Dinard, Newport-Bermuda and the 2,215-nautical mile Transpac (Los Angeles to Honolulu).  With one course record under their belts, Laplanche and Breymaier hope to sail Lending Club 2 – which is capable of speeds over 40 knots in the right conditions – to a new Newport-Bermuda record that is significantly faster than the existing time. The attempt will be observed and ratified by the World Sailing Speed Record Council (WSSRC) and Guinness World Records.

The yacht will be on standby in Newport while the crew observe the weather and wait for suitable conditions, ideally a moderate following breeze, and manageable conditions, to allow for top speed.  As of now, the weather window looks favorable for a departure on April 19.

Laplanche is no stranger to success – either on the water or off.  A two-time French National Champion in the Laser class (1988, 1990), the now 45-year-old entrepreneur put an Olympic campaign behind him to focus on business and progressed from work as a securities lawyer to founding the software company TripleHop Technologies (acquired by Oracle in 2005), before founding Lending Club in 2006.  It was while racing in the 2013 Transpac, on John Sangmeister’s 72-foot trimaran, that Laplanche met Breymaier and discovered a shared passion for sailing and winning. (They were first to finish and took first place in the multihull division on the Orma 72.) Breymaier, a native of Annapolis, Maryland, has become one of America’s most prominent offshore sailors and currently holds the world sailing speed record for New York to San Francisco: 13,225 nautical miles in 47 days.

Lending Club 2 will return to the City by the Sea following the Newport-Bermuda passage. The yacht will then head to New York for a week to share the sailing experience with Lending Club employees and guests, as well as with students from two New York-based maritime schools who hope to eventually make a career on the water.

In June the trimaran will arrive in San Francisco, corporate headquarters for Lending Club. A month is dedicated to sharing the sailing experience with employees and guests of the company, with early July reserved for sail training.  In mid-July the crew will take the trimaran to Long Beach, Calif., for their start in the Transpac Race on July 18 (date to be confirmed by the Organizing Authorities once entries have closed.) Crossing the starting line of the longest ocean race in the world (first sailed in 1906) will be the culmination of months of effort; the focal point of this season’s two previous record assaults being a win of not only the Transpac course record but also the outright sailing speed record across the Pacific to Hawaii.