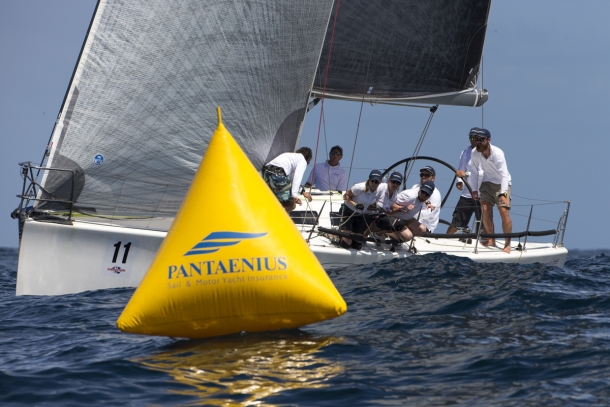 A fleet of nine Victorian Sydney 38s entered for this weekend’s class state title will vie for bragging rights as the fastest Sydney 38 on Port Phillip Bay.

Sandringham Yacht Club is hosting this signature event for the southern chapter of the Sydney 38 Class Association. It will be a busy weekend for SYC hosting the 38s, J24s and their Centenary regatta, one of the largest club regattas for the year. The view from the club balcony will be a spectator’s delight!

Brenton and Jen Carnell’s Geelong based Phoenix is hot favourite. Fresh from a recent nationals title victory in Pittwater, they showed they are the boat to beat in light airs and will be watching the weather closely to see if their A grade light air game can win them another piece of silverware for their expanding trophy cabinet.

Bruce Taylor’s Chutzpah38 features the late Lou Abraham’s ex-Challenge afterguard who are looking to move up the podium from their recent fourth place at the nationals.

Robb’s Beneteau First 45 Ikon is the current undisputed division 1 IRC champion sailing out of Hobson Bay Yacht Club and he and his crew are looking forward to transferring their success across to the local Sydney 38 one design fleet. “We were attracted to Sydney38s as they offer some of the best one design racing in Australia,” Robb commented. “Our Beneteau Ikon offers great sailing and we continue to push ourselves every time we race. Ikon38 offers the chance to match race large keel boats and forget about the handicap. We can't wait to get out there this weekend and we are looking forward to seeing where we sit on the leader board after the last race on Sunday.”

Sydney 38 Class President Greg Clinnick reckons the addition of another top notch Sydney 38 to the Victorian fleet once again raises the bar and he welcomes Ikon38 and its crew to the Sydney 38 family, which now boasts 11 Victorian boats. “We saw a massive amount of interest in the class coming out of the recent nationals; several major sponsors, 3,500 Facebook views and 1000+ YouTube views. People are interested in what we are doing, that’s for sure. We have an increasing membership and I’m aware of two more syndicates interested in buying a Sydney 38.

“Our next nationals will be held in Geelong in January 2016 as part of the Festival of Sails and we already have 16 owners planning to enter, including those from South Australia and NSW,” Clinnick added.

The local Quantum Sails loft through Dave Eickmeyer is supporting the Victorian Sydney 38 state title with up to seven windward/leeward short course races scheduled across the weekend starting at 10am daily. The presentation of awards will take place immediately after racing on Sunday the 19th on the balcony at SYC. The fleet will also enjoy a social function on the Saturday night.