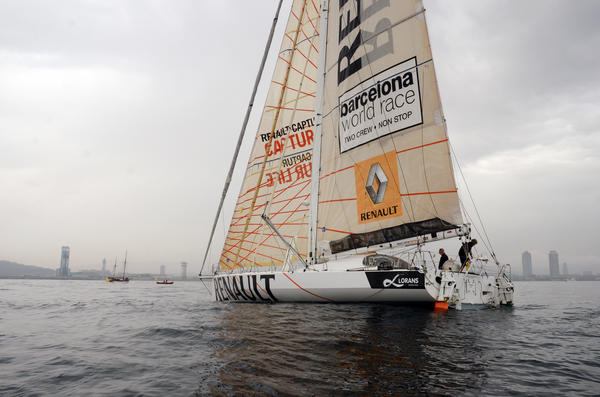 Jorg Riechers (GER) and Sebastien Audigane (FRA) brought their Barcelona World Race to an end today (Thursday) when they sailed Renault Captur across the finish line off the Catalan capital's landmark W-Hotel at 11:35:22hrs UTC to take sixth place.

The German-French duo complete the 23,321 miles theoretical course in 105 days 23 hours 35 minutes and 22 seconds. Renault Captur finishes 21d 17h 44m 22s behind the Barcelona World Race winners Cheminées Poujoulat, Bernard Stamm and Jean Le Cam, and 6d 20h 28m 54s after the fifth positioned Bruno and Willy Garcia on We Are Water. Renault Captur's average speed for the theoretical course is 9.17kts but in reality Riechers and Audigane sailed 29,701.24 miles on the water at an actual average speed of 11,68 knots.

Their relief was immediately evident as the Renault Captur co-skippers completed their Barcelona World Race. Theirs has been a race which started with moderately high but realistic expectations. On paper a podium position was not beyond their abilities nor their boat.

But their two-handed round the world race has been plagued by challenges and disappointments and it has taken all of their proven stamina and inner strength to complete the course. Their biggest problem surfaced between the 15th and 16th of February when Riechers and Audigane suffered an unspecified damage to their starboard rudder blade. They successfully replaced the blade with a spare sheath but it rendered the boat uncontrollable at anything close to high speeds and big waves, resulting in many frightening and debilitating wipe-outs and Chinese gybes.

Lying in fourth at 200 miles behind GAES Centros Auditivos and gaining on the Spanish duo Anna Corbella and Gerard Marín, they ha d to take the very tough but prudent decision to divert 750 miles, turning back to the NW to stop in Wellington, the nearest haven with a suitable boatbuilding/repair facility to attend to the rudder. They were passed by We Are Water and then One Planet, One Ocean & Pharmaton as they made their course towards Wellington, dropping to the sixth position that they finish in today.

“We lost 2000 miles and two places but it has happened there is nothing we can do about that,” Riechers said on leaving Wellington on 23rd February after their 40 hours pit stop. But the remodelling and reshaping of the blade proved to be of limited improvement. Riechers and Audigane still had to carefully govern their speed to around 15-16kts for much of the Pacific, effectively ending any remote prospect of catching back the lost places.

Among their greatest satisfaction derived from their racing circumnavigation, though, is their seamanlike, accomplished passage of the most ferocious conditions at Cape Horn experienced by a pair of co-skippers in this or any recent edition of the Barcelona World Race. The duo outran a hurricane force storm to round Cape Horn itself but immediately after had to endure squalls of 70kts and huge seas, reduced to sailing with just a triple reefed mainsail for much of the time.

On the eve of his 47th Birthday Audigane, who raced the 2010-11 edition with Kito de Pavant but had to withdraw to Ushuaia with keel damage noted:

“Is Cape Horn just the gateway to hell? It could well be that for us. The tropical low to the north of Renault Captur, which has been following us since NZ is in the process of turning into a weather monster. For us it’s a race against the clock. If we’re quick enough we’ll get by just losing a few feathers with winds up to 45 to 50 knots and 7m high waves.”

Their reward for such endeavours at Cape Horn and in the Pacific simply never came. Renault Captur's passage up the South Atlantic saw them pressed up against the South American coast either upwind – in an area which should have been sparkling trade winds sailing – or dealing with long periods of unsettled, unsteady light winds. They have always communicated their experiences and feelings directly and from the heart, the German co-skippe r wearing his heart on the sleeve of his foul weather jacket: “This sucks!” became his recurring joking assessment, whilst even the patience of the more experienced, tall, laconic Frenchman was stress tested to the extreme. To compound their displeasure they had very strong contrary, Easterly winds in the Straits of Gibraltar and in the Alboran Sea which required them to slow right back to 3-5kts at times, and so their final 500 miles have been as frustrating as any during the race.

The irony that the boat which won the race, Cheminées Poujoulat, was extensively optimised and updated when it was in Riechers hands as part of his Vendée Globe 2016-17 preparations still hurts the German sailor. His sponsor pulled out of his project and he lost the boat to Bernard Stamm for this race, instead having to adopt the Finot-Conq design which although had a good previous record, second in the 2008-9 Vendée Globe as Brit-Air has given the duo many technic al problems around this Barcelona World Race course.