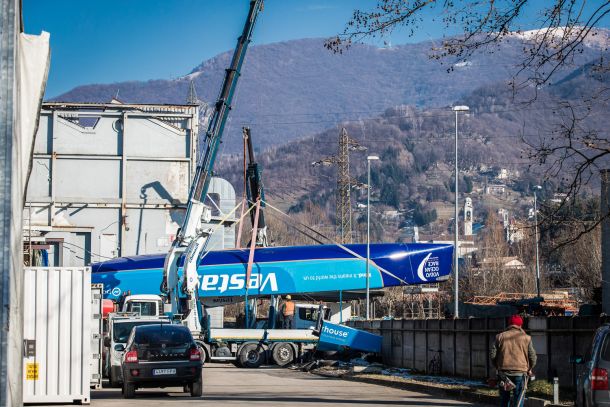 ITAJAí, Brazil, April 16 – Team Vestas Wind (Chris Nicholson/AUS) shore manager Neil Cox has paid tribute to the joint efforts to return the Danish boat into the Volvo Ocean Race 2014-15 – and is cautiously optimistic they are on track.

The team, who did serious damage to their Volvo Ocean 65 on November 29 during Leg 2 when they collided with a reef in the Indian Ocean, are rebuilding the boat in the Persico boatyard in Bergamo, Italy. They have set themselves a very tight schedule of returning to the current 12th edition by the Lisbon stopover in late May/early June to sail the final two legs. The fleet is scheduled to depart from Portugal for Lorient, France, on June 6.

There have already been huge efforts to help facilitate Vestas Wind's return with Race partners, Maersk Line, and sponsors, GAC & GAC Pindar, overseeing the boat's crossing from Malaysia. Cox hopes they can make that deadline, but warns it is still a huge challenge despite the great teamwork between the various cogs in a big wheel, including Persico and Green Marine (Britain).

“Like all intense build projects, you can see the signs of wear on the guys, but to their credit they have not yet shown any sign of things being in the ‘too hard’ basket,” he said on Wednesday. “The reality is, though, that we are going to have some challenging days in front of us to hold this all together as required. But we have a pretty determined group.”

The immediate target is have the boat ready to be loaded on to a truck from the shed at Persico for the long journey to Lisbon in six weeks.

Cox listed the progress so far.

“The deck is on, the boat is out of the mould. All the primary structure is in the boat and a large percentage of the internal secondary structure and detailing is underway,” he said. “The hull surface has come out of the mould nicely and we have the paint team starting on all the surface prep work here, filling in any pin holes before the application of primer/undercoat. With this done, we want to offer the teams from Diverse, Navtec, Livewire, Cariboni (working on internal components such as the electronics and hydraulics) as much uninterrupted runway through the boat as possible.

“We are still receiving required equipment daily by the pallet load and have had the support of both Green Marine and Volvo Ocean Race shared services helping with the transfer of both information and parts.”

Meanwhile, work on the racing boats that contested the treacherous Leg 5, has progressed without major issue. That includes Dongfeng Race Team (Charles Caudrelier/FRA). The boat’s mast, which was fractured during the stage and forced their retirement, is being replaced. Caudrelier and his crew expect to return their boat to the Itajaí waters on Thursday, ahead of Saturday’s Team Vestas Wind Itajaí In-Port Race.