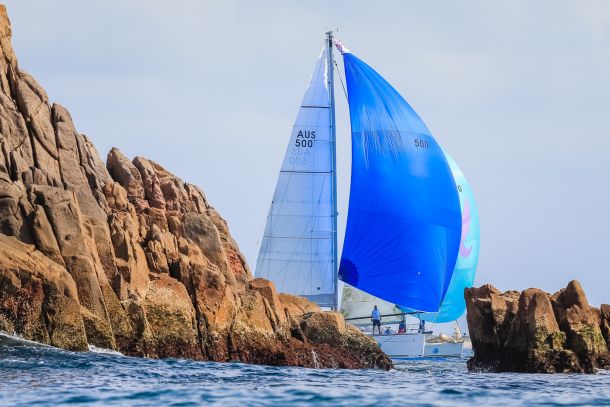 The Performance Racing and Cruising divisions of the second stage Port Stephens Trophy scored the picturesque islands course beginning with a spinnaker start and run out of Nelson Bay. The IRC fleet began their NSW IRC Championship quest in Providence Bay on the north side of the port entrance with two windward/leewards.

If day one of three is the gauge, division 1 of the IRC fleet is going to be compact at the top. Two races in and the first three boats sit on equal points; Marc and Louis Ryckmans’ latest PMA Yeah Baby, a Welbourn 50, Sam Haynes’ latest Celestial, a Judel Vrolijk designed TP52, and Tony Kirby’s Ker 46 Patrice.

Haynes’ result is significant given he’s only had the boat for 10 days and sailed it twice in that time. “I had my previous Celestial for five years and think this is a good step up for us. Some of the systems are the same as the Rogers, though being a TP52 it is pernickety.

“Today was ideal; being light it was an easy day to go through the motions. If the wind picks up to 15-20 knots that will suit the sails we have and we’ve got the guys on board who can handle it. There will be a bit on though….”

“There’s a strong fleet in div 2, guys who have won this event before so we know who to look out for,” commented Griffiths. “It was perfect for us out there today; the boat was set up really well and the crew worked seamlessly on an easy day and very beautiful day. A bit more breeze tomorrow will be fun; we are looking forward to it!”

Griffiths is a big Sail Port Stephens fan, “I really look forward to this regatta and I love this area. Racing out there today off the beach has got to be one of the best race tracks in Australia, and you couldn’t ask for better conditions.” Chapman seconds the skipper’s call, “I’ve been in a lot of tough sailing conditions this year and today was just perfect, and easy for the tactician which is good for me! It’s a great time of year to be here.”

Adrian Walters’ Shaw designed 11m called Little Nico looks beaut on the water but does it go? Sure does. Walters and the boys on the sleek black-hulled sportsboat picked up a second in the Performance Racing obstacle course around Little, Cabbage Tree and Boondalbah islands. “We are really happy with the boat,” said the owner.

One weather model shows stronger northerlies are due tomorrow and then the event may lose a couple of southern competitors who are considering heading home a day early to beat the forecast southerly change and building swell that looks set to shake things up on Sunday, April 19, the competition closer for the Port Stephens Trophy.