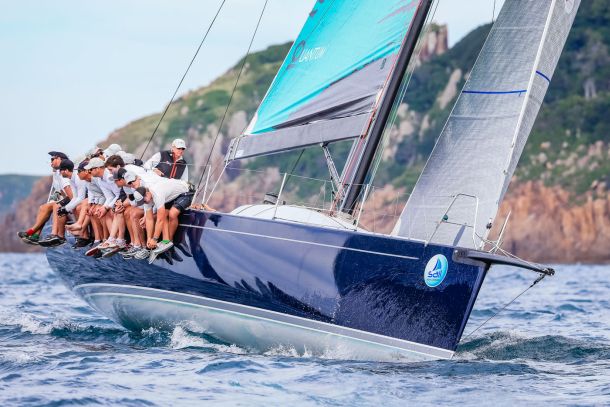 Something’s brewing at Port Stephens, and not just the crazy crew costume plans for tonight’s dress up ‘P party’ at Vues on the Bay on the eve of Sail Ports Stephens’ final day. Light winds and unseasonably warm temperatures belie the southerly change that’s heading up the NSW coast to change the tempo after five easy competition days, three in the opening Commodore’s Cup and two days of Port Stephens Trophy events.

Forecasted blowy northerlies were blocked by the heavy cloud cover over the Hunter region today, Saturday April 18, 2015. Skipper of the 20 ton Kaufman 58 called Pilgrim, Paul Ley, had been keenly awaiting anticipated fresher conditions to push the weighty beauty around the track. “We are a lot of boat,” Ley nodded.

Pilgrim and the rest of the Performance Cruising fleet eventually began their Nelson Bay inshore course an hour and a half after the scheduled start time. Starting against the outgoing tide meant race officer Elaine Fowler needed enough wind to push the boats upstream. A window opened up and though light there was enough breeze to run the race and finish everybody, with just one retirement.

The IRC and Performance Racing divisions out on the open water north of Cabbage Tree Island and off Hawks Nest beach managed three slow windward/leeward races in light northerly winds tending nor’east and averaging six knots. It was a long day. A stunning sunset and the usual evening cacophony of Rainbow lorikeets in the waterfront trees greeted the fleet as they motored into d’Albora Marina just before dark.

Nine Dragons’ tactician Bobby Wilmot admitted, “It was hard to tell how we were going; we haven’t had electronics all regatta. We are doing it the ‘old boys way’ so may not be as sharp tactically, but we are hanging in there.”

“Thanks to Bobby and the boys, they have been flying by the seat of their pants,” said the delighted owner, adding, “It’s a better result than we could have hoped for. This calibre fleet is one of the best we’ve raced,” Cox added. The dragons are getting stuck into a big roast leg of lamb tonight, Cox feeding the team up before expected tougher conditions for tomorrow’s deciding race.

On the penultimate day of Sail Port Stephens for 2015 Mark Griffith and his Old School Sydney 38 crew have stamped IRC division 2 theirs, an awesome three wins from five races plus a second and third place putting them out of reach with a day spare.

John Egger, owner/skipper of the Jenneau 31 Eggsilante that took out today’s Performance Cruising division 2 inshore race celebrated the surprise victory with his crew on the dock. “We had a great race, very testing with the fickle wind; it’s the first time I’ve ever deployed an anchor to stop the boat going backwards. That was a classic. We sailed our race and the crew were fantastic. Fancy coming all the way up here and getting first…woo-hoo!”

Some in the Sail Port Stephens fleet, including Eggsilante from Gosford Sailing Club, are bugging out a day early, motoring south tonight to avoid the front and associated thunderstorms and large seas that are going to make delivering boats back to the southern ports next week very uncomfortable.

The Sunfast crew, a Performance Racing entry, will be remembered at this regatta for their good fashion sense rather than performance (though they score a third in race four today), reckons skipper Glenn Smith. The photogenic red and white 36-footer is sailed by crew always in matching attire – red shirts one day and white the next, which lets them wash at night.

So, which is faster – red or white? “Well the red shirts are tighter and there’s less resistance…designed to streamline the skipper,” Smith says with a pat on the tummy.

Due to the weather turning, the original on-water program has been re-jigged so all three Port Stephens divisions have a single final race tomorrow followed by an early trophy presentation and then the 500 or so yachties can disperse with their families.

Pantaenius’ sponsorship of Sail Port Stephens is one of the event’s major commercial partnerships and business development manager Adam Brown says, “we are very happy with the attendance this week and the weather is excellent. Pantaenius has been a part of Sail Port Stephens since its inception and we will continue our support.”

The regatta is also proudly supported by the NSW Government through its tourism and major events agency, Destination NSW.