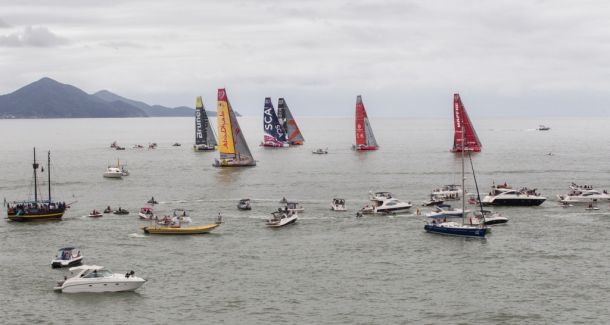 ITAJAí, Brazil, April 19 – The Volvo Ocean Race fleet bid a lingering farewell after a successful stopover in Itajaí with an almost total lack of wind ensuring a go-slow departure for Leg 6 to Newport, Rhode Island, USA, on Sunday. After watching the six boats drift in frustratingly super-light conditions in the south-east Brazilian port for nearly an hour, the Race Committee cut its losses and ruled that the fleet could sail into the open seas by drastically shortening the opening in-port lap.

Some 270,000 spectators have visited the Itajaí race village since the Leg 5 winners, Abu Dhabi Ocean Racing (Ian Walker/GBR), arrived here on April 5. There were approaching 50,000 more for the departure of Leg 6, a 5,010-nautical mile stage, and the sailors appeared to be in no hurry to leave an electric atmosphere.

Team Alvimedica (Charlie Enright/USA) are the team with arguably the biggest desire to win the leg into their home port and they duly had the honour of leading the fleet out of Itajaí with barely three to five knots of boat speed. MAPFRE (Xabi Fernández/ESP) were their closest pursuers followed by overall race leaders Abu Dhabi Ocean Racing, Team SCA (Sam Davies/GBR), Dongfeng Race Team (Charles Caudrelier/FRA) and Team Brunel (Bouwe Bekking/NED) in that order.

Walker and his crew, who head the leaderboard by seven points after Dongfeng failed to complete Leg 5 because of a broken mast, had a miserable start as they found themselves on the wrong side of the starting line and had to turn around in slow motion before setting off.

Once the fleet escapes the immediate shortage of breeze in almost Doldrums conditions, the fleet should find appreciably more wind up the Brazilian coast through the Atlantic.

The leg is unlikely to match the previous stage’s treacherous conditions through the Southern Ocean and south Atlantic, but there are still plenty of challenges to test the fleet to the full. Light winds, however, could still hamper them along the way.

The boats are expected to take around 17-20 days to reach Newport, the seventh port to host the race.