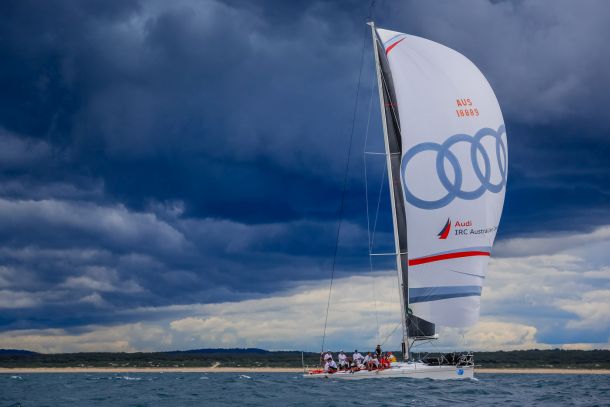 A cold front moving up the NSW coast bringing strong winds, rain and thunderstorms stayed away long enough for race crews to enjoy a sixth and final day of easy-going conditions and a dry Sail Port Stephens, other than some light pre-frontal activity over Nelson Bay in the regatta’s final hours that didn’t even wash the decks.

The race committee led by Principal Race Officer Denis Thompson tracked the weather system’s progress north and in anticipation reduced the program on the deciding day to a single race for all divisions. The last Pantaenius mark buoys were sent to the yard to be deflated and stored for next time and crews were ashore getting ready for the end of series trophy presentation when the 20 knot southerly reached the Hunter coast.

Close to 100 entries and 1,000 sailors and their families spent the week, Monday 13 to Sunday April 19, 2015 at Nelson Bay soaking up the sun and school holiday fun.

On the racing side two regatta halves catered for cruisers, performance cruisers and racers, and two divisions of IRC racers determined the new state champions. A Junior One Sail off the beach series over two days integrated local dinghy sailors and some of the under 18s racing in the big keelboat fleet with the main regatta.

A hotly contested division 1 was in the end comfortably taken out by Cox’s DK46, the reigning national class B IRC champion. Eight and a half points off the new state champion was Stephen Barlow’s Farr 40, Forty (RSYS) with a hot shot young crew aboard in second and Tony Kirby’s Ker 46 Patrice (CYCA) placed third.

“The 11 year-old DK proved it’s got plenty of life in it,” laughed Cox. “When I looked at the list of entries prior to the regatta I thought it would be hard going. We knew we had to be consistent and keep ourselves up there. Bobby [Wilmot] our tactician did a terrific job of old school sailing without any electronics. We couldn’t have asked for a better regatta.”

Off the back of an IRC division win at last year’s Audi Hamilton Island Race Week, runner up in division 2 Stephen Barlow thought he’d give the state champs a whirl and says Forty was sailed above expectations. “We had some pretty good guys on board ….tactician Seve Jarvin, Joe Turner, John Flannery… plus a whole lot of YSA guys from the CYCA. It was our first time at Sail Port Stephens and the forecast was perfect for us.”

Mark Griffith’s Sydney 38 Old School secured their top podium placing yesterday, Saturday April 18, and only needed to start today’s closing race. “It was a great series and surprisingly competitive,” Griffith said. “Even though we ended up with a big score and a fair way ahead on points, on the race course the margins were very tight. Whereas some of the other boats do better in certain conditions, Forty is competitive in a wide range; we are a good all-rounder. This Sail Port Stephens had the best conditions for a regatta I can remember,” Griffith added.

“Major congratulations to Old School along with all our competitors,” said the Wild Rose team this afternoon on social media. “We are pleased with our second place and are looking forward to seeing you all at Hamilton Island for the nationals.”

The next major IRC competition is the Hamilton Island IRC Australian Championship, August 16-22, as part of Audi Race Week.

Final words from the PRO

In summary Denis Thompson said the week offered a terrific variety of courses in perfect holiday conditions. This being the eighth edition, the organising committee has the 10th anniversary event on the radar with plans to build the fleet in 2016 leading into the regatta’s first significant anniversary the following year. “Bigger and better is the aim with even more emphasis on upping the level of onshore activity and focusing on more ways to include families in the event,” Thompson says.

Chairman of Destination Port Stephens Michael Aylmer says his organisation has been involved pretty much since the start back in 2008. “We’ve watched the event grow to what it is today, it’s an impressive event for the community and competitors.”