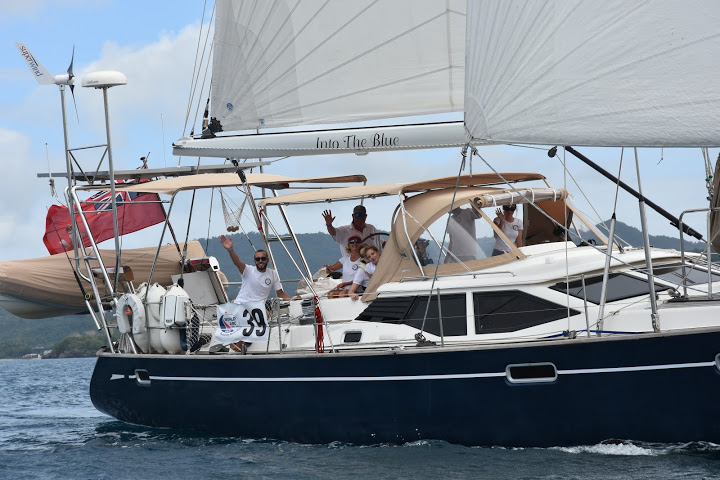 The crew of Into the Blue. Photo © WCC / Lucia Ivanissevich.

12/01/2016
Thirty boats sailing as part of World ARC 2016-17 departed Rodney Bay Marina in Saint Lucia on Saturday 9 January for the start of an epic 26,000 mile adventure around the world. World ARC is a circumnavigation rally for cruising boats, with a mix of organised stages and free sailing periods, providing a safe and social framework for an adventure of a lifetime. For many crews and owners, Saturday's start was the goal of many years of thinking, hoping, planning, and many recent months of detailed preparations.
World Cruising Club's organised programme of briefings and seminars coupled with safety checks and social activities have ensured crews were prepared and excited for their adventure. “The crews have had a busy but enjoyable programme in Saint Lucia,” said World Cruising Club's Managing Director Andrew Bishop, “The atmosphere established amongst the crews this week has been electric and bodes well for a great rally ahead, whether it be to Australia, or all the way round for the circumnavigators of the fleet.”
As forecast by World Cruising Club weatherman Chris Tibbs, crews were treated to pleasant conditions on start day to cast off their lines and put to sea. A steady easterly wind of about 10-15 knots blew across the start line. As the countdown to the start was made on the VHF radio, the motor yacht Reel Extreme was on station to provide representatives from the Saint Lucia Tourist Board and IGY Rodney Bay Marina, members of the media and other local supporters with an excellent view of the fleet as they hoisted their sails and jockeyed for a good start position.
First across the line was the Swedish flagged Baltic 56, Spirit V, with the smallest boat in the fleet Ain't Fancy, and Beneteau First 47.7 Chilli Bee following closely behind. On leaving Rodney Bay,  the boats sailed south along the Saint Lucian Coast towards a turning mark off Castries, rounded first by Spirit V to set course west towards the first World ARC 2016-17 stopover of Santa Marta, Colombia. The crossing is expected to be quick, but a little uncomfortable and the boats will take around 5 days to reach Marina Santa Marta.  This is the second year that the rally has visited the South American port that is rapidly becoming popular with bluewater sailors as a comfortable base for discovering the dramatic landscape and pre-Hispanic heritage of the region.
World ARC Route: Classic Tradewind Sailing
From Santa Marta, the fleet cruise to the idyllic San Blas Islands and then transit the Panama Canal before setting off across the Pacific. On their way to Australia, stopovers en route include Galapagos, Hiva Oa, Tahiti, Raiatea, Niue, Vava'u, Fiji and Vanuatu.
Some boats will leave the rally in Australia, with more joining for the restart of the second half of the adventure from Darwin in September 2016. Avoiding the troubled areas of the Indian Ocean, the World ARC route takes in Lombok, Cocos Keeling, Mauritius and Reunion before enjoying Christmas and New Year in South Africa. From Cape Town the boats will visit St Helena, before enjoying carnival in Brazil and then heading back into the Caribbean via Grenada to finish in Saint Lucia in April 2017.
World ARC Fleet
In total 41 boats and over 300 people will take part in World ARC 2016-17; some sailing the full 26,000 miles, others join the fleet for several stages. With starts every year, some boats will take a year out in the Pacific and complete their circumnavigation with a subsequent edition of the rally. The largest boat is 18.90m Oyster 62 Wishanger II (GGY), and the smallest is 10.72m Albin Strauss Ain't Fancy (GER).  The fleet includes 12 catamarans, 10 of which started in Saint Lucia. The oldest boat is Ain't Fancy (GER) built in 1980 and sailed by husband and wife Dirk and Bettina Sommer, whilst the newest is Dufour 500 GL Heidi 2.0 (FRA) which came out of the shipyard in 2015. A varied fleet as ever but these differences will lose relevance over time as all crews get to know one another better and all live through this experience together.
World ARC is an international event, with boats sailing under the flags of 18 nations, and crews coming from more than 20 countries. Eleven children aged under 18 are sailing in World ARC, and the crews are a mix of families, couples and friends.
Join the Fun
It is still possible for boats to join the World ARC fleet in Australia in late August 2016 for the Indian Ocean crossing to South Africa, and onwards to the Caribbean. This route keeps well away from areas of pirate activity, and allows the participants to enjoy experiences as diverse as the remote atoll of Cocos Keeling and the great animals of South Africa.
World ARC sets sail from Saint Lucia every year and so far 24 yachts are set to join the next edition of the rally.