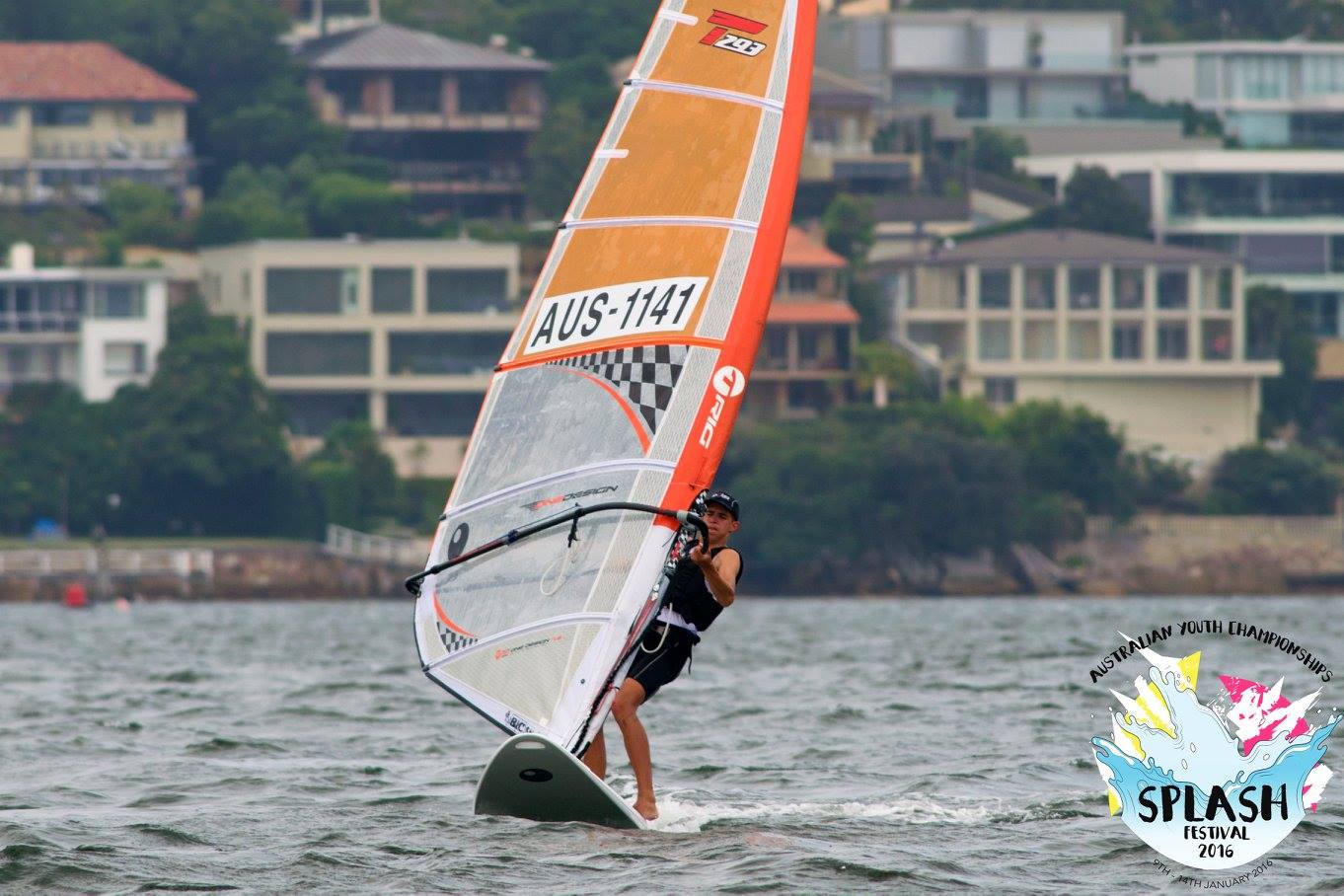 Racing at the 2016 Australian Youth Championships saw mixed conditions today, as courses were set in the vicinity of Rose Bay and across the main harbour, towards Clifton Gardens. The Laser (4.7 and Radial) and 29er classes have completed a five-race series whilst the 420, Hobie and Bic Techno have chalked up six races respectively, with two days of competition remaining.

With the temperature soaring in to the high 30s and a glass-out on the harbour by 0900, sailors were held ashore as the race committee monitored conditions. It wasn’t until 1000 when the race committee called the 29er class out for their first race of the day, in a 5-6 knot Northerly.

A predicted Southerly front took longer than expected to fill in on the harbour, testing the patience of the 29er class and their coaches, who were left on course by RO, Peter Moor, after completing race four of the series. Meanwhile, all other classes remained on shore, before the AP was lowered around 1300. The 29ers completed one race in the increasing southerly, for a daily total of two, before the 420 and Hobie classes joined Charlie course, adding three races to their scores.

On the Bravo course, RO Robert Lowndes waited for the change to settle before he sent out the Laser Radial and Laser 4.7 classes, which were both scheduled for later starts today. The Radials completed two races, having completed three on the previous day, while the Laser 4.7s made up for their lost race schedule today, in gusty Southerly winds reaching 25 knots (the race maximum) at times.

Rome Featherstone posted a solid 4, 4 in the shifty Rose Bay conditions, which leaves him in the overall lead, two points ahead of William Sargent, with Max Gluskie sitting a further 11 points back with a combined score of 36 in third place. Hayden Coote scored an impressive 1, 1, 2 today clearly enjoying the breezy conditions.

For the Laser Radial Leader, Conor Nicholas, it wasn’t all smooth sailing as he posted a sixth place in the first race of the day. Clearly dissatisfied, he fought back hard in the second race, to take the win by over a minute and 15 seconds, ‘I’m here to win no doubt,’ he commented after the day’s racing,

‘I was pretty upset with the first race, I’m aiming to keep within the top two as much as possible – keeping the score low, sailing fast and enjoy it,’

‘It’s totally different to sailing at home – it’s a lot flatter, like the River where we train [only] once a week. Adapting to the flatter water is ok but having Finn [Alexander] close at times is a bit worrying since he knows the place really well.’

Nicholas will head in to tomorrows racing 11 points clear of Noah Taylor, who sits in second place after sailing a consistent series so far. Victorian Brody Riley holds on to third place, whilst Marlena Berzins leads the girl’s category from 14th place. The scoreboard in the radial fleet is tight and with the drop race coming in to play after the sixth race, there is sure to be some changes at the top of the board.

Natasha Bryant and Annie Wilmot proved that consistency counts and added a 3rd and 2nd place to their scoreboard today. The pair placed third at last week’s 29er Australian Championships and hope to qualify for the Australian Youth Team this year. Although the girls have been sailing together for two years, they are yet to win a national level race and having lead several times this week, it’s only a matter of time before they break the voodoo with a first place score, ‘it’s so frustrating that we can’t finish in front!’ said Bryant,

‘Each day we get out there hoping it will be the one where we manage to put the whole race together… it’s so hard to get the lead in such an amazing fleet, especially being lighter in the heavy breezes and we keep throwing it away!

‘We have developed a new strategy and hope that we get the chance to have another shot at first place this week – I really want to stay in the lead for the whole race!’

Young Tom Crockett and his crew, Tom Grimes are three points off the leaders after posting another win today. Tom Alexander and Oscar Gunn remained in the top ten in both races, leaving them in third place overnight. Australian Champions’ John Cooley and Simon Hoffman were OCS in the first race of the day, sending them down the scoreboard. The pair made a huge comeback in the second race, finishing in fourth position after a slow start.

The end of the first race was perhaps the most exciting of the championship so far, with a 5 boat ‘graveyard’ at the bottom gybe- mark before the finish. Channelling Steven Bradbury, Alex Brodie and Emerson Carlberg managed to stay upright and moving forward, stealing the win from their competitors who fell victim to a sudden increase in pressure.

The win was enough to keep Brodie and Carlberg in second place, with Nicholas Sharman and James Grogan holding on to their lead with only nine points on the board. The pair continue their fantastic form, having won the Australian Championships on the same waters, just last week. In third place are Finn Gilbert and Henry Haslett, followed closesly by three all-girl teams lead by Sophie McIntosh and Emily Summerell of NSW.

In the Hobie 16, the ‘Not Related’ team of Lachie White and Ethan White, added three more wins to their scoreboard. Having only dropped one race so far, the team is looking forward to the second half of the event. Contrary to earlier reports, the ‘White’ boys are not brothers – instead, they are two mates who are sitting in a very comfortable lead at the halfway point of the series. Will Mckenzie and Pat Butler head in to tomorrow in second place, whilst Kyle Fortier and Bonnie Butler sit in third position.

Racing is scheduled to resume at 1000 tomorrow, 13th of January, three races scheduled for the penultimate day of the regatta.