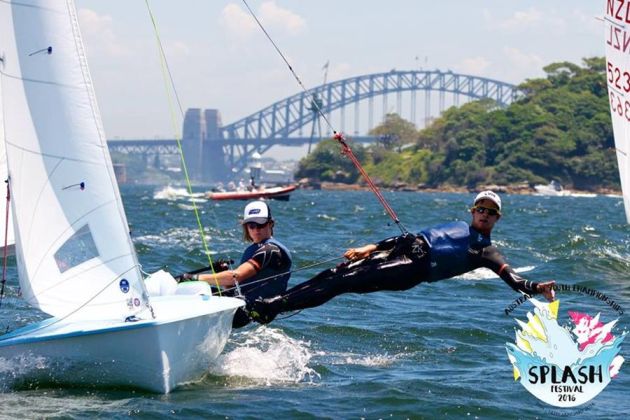 The opening day of the 2016 Australian Youth Championships treated sailors to a typical Sydney sea breeze that allowed each fleet to enjoy three races in 15-20 knot winds. The out-going tide caused choppy waters and frustration for the race committee, with start sequences resulting in recalls across all classes and racecourses.

AYC hosts, Woollahra Sailing Club are holding the event as apart of its SPLASH Festival, which has already seen the completion of three Australian class Championships since the 1st of January. This saw the majority of the AYC 29er and 420 fleets compete on the Harbour last week, in their respective regattas. However, competitors may have thought they were competing at a brand new location, as last week’s storms and unseasonably cold weather made way for sunshine and sea breezes today.

In the 29er class, NSW’s John Cooley and Simon Hoffman continue their fantastic form, after taking away the Australian Championships a few days ago. Cooley aimed to consolidate their recent win, successfully posting ‘keepers’, as they pair aim to remain consistent this week- a difficult task under pressure.

Cooley represents the AYC / SPLASH host club and with Hoffman, the pair sit one point clear of Victoria’s Thomas Alexander and Oscar Gunn who posted two wins on the opening day, ending with a ninth place in the final race of the day. The pair has only been sailing together since the beginning of the 29er nationals and hope that the strong winds continue throughout the week.

Crockett and Grimes sit in third place on 11 points with a return to form after an uncharacteristic first race from the Central Coast Duo. Impressively, Crockett is one of the youngest competitors and at the tender age of 13 is competing at his debut AYC. Crockett steered AUS 2262 to a first place in the third race, a sign of what is to come over the next few years.

Just two points further back are the Australian Female 29er Champions, Natasha Bryant and Annie Wilmot who were in top form and lead the girl’s point score. Although they lead races all day the girls were unable to convert their on course position to a win. The team from RPAYC sits on 13 points, having posted a 9, 2, 2 today.

In AYC tradition the Laser Radial continues to be one of the most highly competitive fleets. WA’s Conor Nicholas continued his fantastic form today with convincing wins in the first two races of the series. The current Laser Radial Youth World Champion, who recently took out the Australian Championship, dropped the final race of the day to Canberra’s Noah Taylor, who sits in third place overnight.

In second position, local Finn Alexander will head in to tomorrow 4 points ahead of Taylor, trailing the World Champion, Conor by 3 points. Alexander will be looking to use his local knowledge in an effort to overcome the Western Australian this week. Leading the girls’ point score in 18th position is Elyse Ainsworth. Ainsworth’s older sister, Jacinta, has recently returned from representing Australian at the 2016 Youth World Championships in Malaysia.

Recently crowned Australian Champion, Rome Featherstone, leads the Laser 4.7 fleet after the first day. Hayden Coote sits in second place after posting a consistent scorecard, whilst Nathaniel Dutton of Queensland sits four points behind in third. Hailey Johnson of WA is first of the girls’ category and sits in an impressive fifth place overall after a windy day on the harbour.

Only four Hobie crews have entered the Youth Championships, as sailors aim to represent Australia and the tradition of multihull success at the Youth World Championships. The White brothers, Lachie and Ethan of NSW sit in first place, posting a 2, 1, 1. One point behind are Will Mckenzie and Pat Butler who have a six point buffer to third placed Kyle Fortier and Bonnie Butler.

In the 420 class there were three different race winners including Australian Champions, Nicholas Sharman and James Grogan. The Victorian team sits in first place overnight, with New Zealanders Finn Gilbert and Henry Haslett taking a win and an overall second place in to tomorrow. NSW’s Sophie McIntosh and Emily Summerell are currently in third position and also lead the girls category.

Bic Techno 293 sailor, Angus Calvert leads the class after four races today. Calvert hopes to follow his brother Jock’s footsteps and achieve selection to represent Australia at the Youth World Championships. With three different race winners this could be one of the closest battles in years as John Lynch sits in second place after claiming the final race of the day. Alex Halank from the Northern Territory took the first race win of the day and sits in third place overnight.

Tomorrow’s schedule includes up to three races per class and with two course areas and racing sessions, the predicted Southerly change, following moderate NW winds in the morning will test sailors and the race committees alike.

With over 162 boat and 230 competitors, the AYC is the most prestigious youth sailing regatta within the Asia-Pacific region. The event attracts sailors from around the world and this year hosts sailors from Japan and New Zealand. Racing will continue until the 14th of January, where the 2016 Australian Youth Champions will be awarded and the event patron, Michael Fletcher will officially close the AYC 2016.