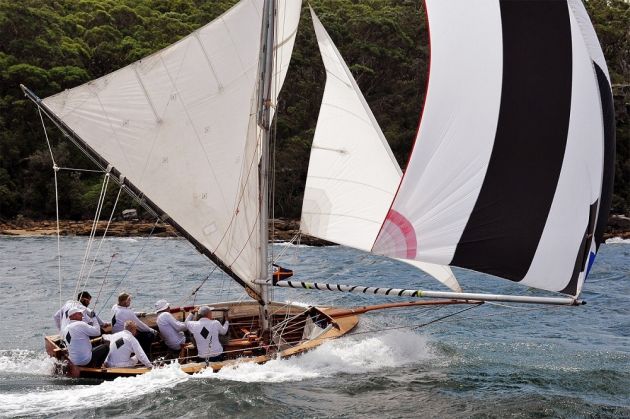 Aberdare, with John ‘Woody’ Winning at the helm, won their third Historical 18 Foot Skiff 2016 Australian Championship in as many years on Sydney Harbour late today, despite being pipped to the post by the Harold Cudmore skippered Yendys by two seconds in the final race.

Hosted by the Sydney Flying Squadron, the original plan was to hold three races in total, but Friday was a windless washout and while organisers initially planned to sail a third race next Saturday, this morning the decision was taken to make today’s race the last.

And what a race it was. It was on between Aberdare and Yendys from the word go, and you would expect nothing less from these two champion sailors. One, Winning, with local knowledge and a host of skiff trophies. The other, Cudmore, Ireland’s best known sailor who has won multiple trophies for himself and others in keelboats and at major yachting events.

Despite repeated attempts to overtake Winning via tacking and gybing duels, Cudmore and crew could not find the overtaking lane in the light 7-8 knot nor’ easterly which lightened to five knots later in the race.

Woody’s crew did not put a foot or sail wrong, and led around the course from the start, when eight of the boats packed the windward end of the line, to finish, which took in Clark and Shark Islands and Kirribilli Point.

Behind, Australia (Michael Chapman) was giving it a good stab, but sail handling and lack of a ringtail cost her dearly, despite her good turn of speed, particularly upwind. She hung on to third place on line, but dropped back somewhat on the last run from Shark Island to the finish.

The rest fought it out for the minor placings behind.

Aberdare made it to the finish line first, and it appeared the gap was enough, when Yendys struggled to hoist her ringtail and then another spinnaker, which eventually gave the boat some good pace.

There was just 58 seconds, between the two at the finish, but the rating band (decided by a boat’s age and other factors) meant that Yendys won the race from Aberdare by two seconds – or as one sailor said, “an elastic band – they kept expanding the distance between the two boats, then springing back in.”

Winning was not available for comment after the race. His daughter, Jamie’s, engagement party meant he had to jump off the boat and straight home ahead of the big night.

Chapman, who joined the class 14 odd years ago when he saw a lot of old skiff mates were sailing the Historical class said he got a lot of enjoyment “just out of sailing the boat. They are very technical. It’s great just to have a good race,” he ended.

Cudmore agreed. “I come back to Australia every year to sail them because they are a difficult boat to sail. There are great people in the class – they are fun – and the camaraderie is great,” he commented.

“I also sail the boat because I am bloody-minded,” he said. “You’re all the time refining your knowledge.”

On finishing second, Cudmore said: “Well done to Woody. No excuses from me – I had a great crew, but Woody made better decisions. I can’t quite unseat him – he is the local champion.”

Once again, Top Weight’s crew, dubbed tongue- in-cheek as ‘The Careening Cove Swimming Club’, capsized at a gybe mark, and that was the end of their day. However, their humour was well intact.

On a sad note, Scot’s skipper, James Watt, paid tribute to his friend and crew member, Paul ‘Shorn’ Souter, who collapsed during Saturday’s race and subsequently died, despite the quick action of Scot’s crew and rib driver, John Walton, who got Souter ashore quickly and performed CPR until an ambulance arrived and paramedics took over.

“We were at the end of a kite run to Chowder Bay, so with the rest of the crew, he helped get the kite down and steady the boat – and then he left us in his care,” Watt said of Souter who was in his early sixties. “He spent the last three to four years sailing with us and sailed forever before with the Notley brothers. Shorn was larger than life – always had a smile on his face – anyone will tell you that.

“I had a lot of new and younger crew this season and he was an integral part of training them. He loved his sailing and had said in the past he would love to go this way.

“It was a horrible thing to happen – but I felt proud as his friend to be there and to look after Shorn at the last. We’re all still in shock, but everyone from the class has been so supportive and everyone has had a kind word to say about him,” Watt said.

Shorn left behind two daughters. Our sympathies go to them and his extended family.

The class races each Saturday in summer and enthusiasts can view racing from the ferry that departs the SFS each week. See the site for more details.

For all information, go to: www.sydneyflyingsquadron.com.au/