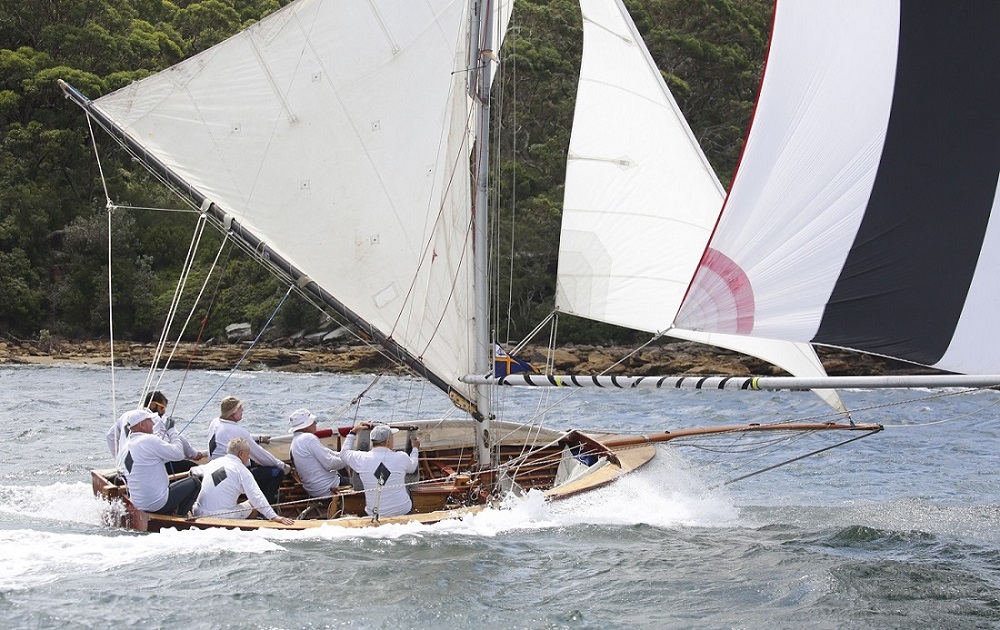 Two prominent yachtsmen, from different spheres of the sport – one with a long association with Sydney Harbour skiffs, the other for his active involvement with C-class catamarans and the so-called ‘Little America’s Cup – have been recognised in the Australia Day Honours announced today.

John William Winning, of the Sydney suburb of Double Bay, has made a Member (AM) in the General Division of the Order of Australia for ‘significant services to the community through fundraising and support for charitable organisations, and to sailing and horse sports.’

John H Buzaglo, who now lives in retirement at Mornington, Victoria, has been awarded the Order of Australia Medal (OAM), the citation reading:

‘For services to sailing as a yachtsman and (sailing) instructor….including being a crew member of the International C-Class catamaran Quest challenge for the Little America’s Cup in the UK in 1965; his involvement in building and sailing the first successful wing-powered sailboat, the catamaran Miss Nylex, winner of the International Catamaran Challenge Trophy in 1974; and for 17 years operator of the Linden Lake Sailing School.’

John Winning enjoyed an early celebrated his award on Sydney Harbour over the weekend by winning the Australian championship for Historical 18 Foot Skiffs in Aberdare in as many years.

Winning has provided physical and financial support for the purchase and restoration of many of the Historical 18 Foot Skiffs with a near a dozen replicas of the gaff-rigged 18s of early last century competing in the championship and today’s 180th Australia Day Regatta.

Winning has been President of the Australian 18 Footers League since 2001 and a members since 1975, being elected a life member in 1984. He is a member of the Board of Governors of the Sydney Heritage Fleet. He has been a Member and Patron of the Vaucluse Amateur Sailing Club for more than 30 years.

For more than a decade, Winning has made available to the Cruising Yacht Club of Australia, at no cost, his ocean-going motor vessel JBW as the Radio Relay Vessel for the Rolex Sydney Hobart Yacht Race.

Winning is also Chair of the Equestrian Patrons Programme and also a significant supporter of cancer research through the POSH Gala Ball Committee and the Sporting Chance Foundation Golf Club which supports research into children’s cancer, especially leukaemia.

John and his wife Cath and daughters Lynne and Robyn joined Blairgowrie Yacht Squadron in 1962. In those days John sailed an XY16, but soon became actively involved in C Class catamarans and the Little America’s Cup.

In 1964 Buzaglo crewed for Lindsay Cunningham on Quest II in the world C Class championships (which they won) but they were then narrowly beaten by the British boat for the Little America’s Cup.

But ‘Buz’, as he was known, wanted BYS to campaign a C Class catamaran and for our club to have a go at the Little America’s Cup. He and a few of his cat sailing mates formed a syndicate, gained sponsorship, appointed a designer and a boat builder and the result was ‘Miss Nylex’, the world’s first successful wing rigged racing catamaran.

This was 1972. BYS was the host club and it’s the half scale test wing rig, that’s now on display in the BYS club entrance. (And that is John Buzaglo on trapeze in the ‘Miss Nylex’ photograph near the lift).

When John retired from Nylex in 1979, he moved to his property at Bittern where he created a lake large enough for small boat sailing. For 17 years, using a fleet of BIC 320’s (about the size of a Minnow) he founded and ran the Linden Lake Sailing School.

Most of the local primary schools sent their students there to learn to sail and he estimates that as many as 10,000 children had their introduction to sailing at Linden Lake.

John is now in his early 90’s and his health now prevents him from sailing, but he still enjoys life residing in Mornington and trying to find time to complete his book on the early days of catamarans and the Little America’s Cup.

In addition to the above, Yachting Australia added these names:

Alan Tough receives a Medal (OAM) of the Order of Australia in the General Division for services to sailing and to the community.

Coming from a well-known sailing family in Western Australia, Alan was on the water at an early age and has played an integral part in the development of sailing.  Alan has held many roles with Yachting Western Australia including President (2005-2007), Vice-President (2002-2005) and Board Member since 2002 and involved with the Western Australia Institute of Sport across the spectrum of junior entry levels to the High Performance Programme.

He is a former President of the S80 Association and an active club member of over 40 years at Royal Perth Sailing Club where he has taken on many Committee positions as well as Captain Sail and Rear Commodore.

Yachting Australia also congratulates Senior Australian of the Year, Gordian Fulde who, went not heading the Emergency Department at St Vincent’s and Sydney Hospital, is a member of Double Bay Sailing Club and has assisted in the delivery of Medical Courses for Mariners at Sydney Clubs.

Robin Crawford has been recognised as a Member in the General Division of the Order of Australia for his significant service to the community through leadership roles with cancer support, mental health and social welfare groups.  He is an active sailor and involved with a number of Sydney clubs and competes with his daughter Clare on his MC38.