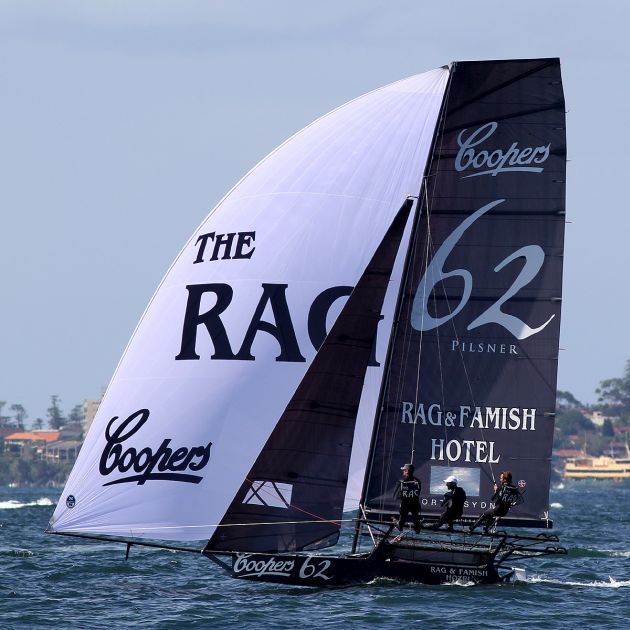 Coopers 62-Rag & Famish Hotel showed her real potential leading into the JJ Giltinan Championship next month with a great return to form to win Race 4 of the Australian 18ft Skiff Championship on Sydney Harbour today. Jack Macartney, Peter Harris and Joel Castle were back to their best form today as they steered their skiff to a 1m28s victory over Gotta Love It 7 (Seve Jarvin, John Winning Jr., Nick Catley).

After each team discards her worst result to date, Smeg has a total of four points, and holds a six points lead from Thurlow Fisher Lawyers on 10 points. Race 1 winner Appliancesonline.com.au (David Witt) is just one point further back on 11 points, followed by Gotta Love It 7 and Noakes Youth on 16, then Mojo Wine and Triple M (John Sweeny) on 19.

The race was sailed in a 10-12-knot East-North-East breeze over three laps of a windward and return course set between Taylor Bay and the Beashel Buoy. Coopers 62-Rag & Famish Hotel led for the entire course.

Race 5, the last race of the championship, will be sailed next Sunday, 31st January and the Australian 18 Footers League will have its usual Spectator Ferry available, leaving Double Bay Wharf, alongside the clubhouse, at 2.00pm, to follow all the action.

Anyone planning to follow the race on the spectator ferry should make sure that they don’t leave it too late to buy their ticket.  The ferries have been packed for the past few weeks and  late-comers risk the chance of being left behind.