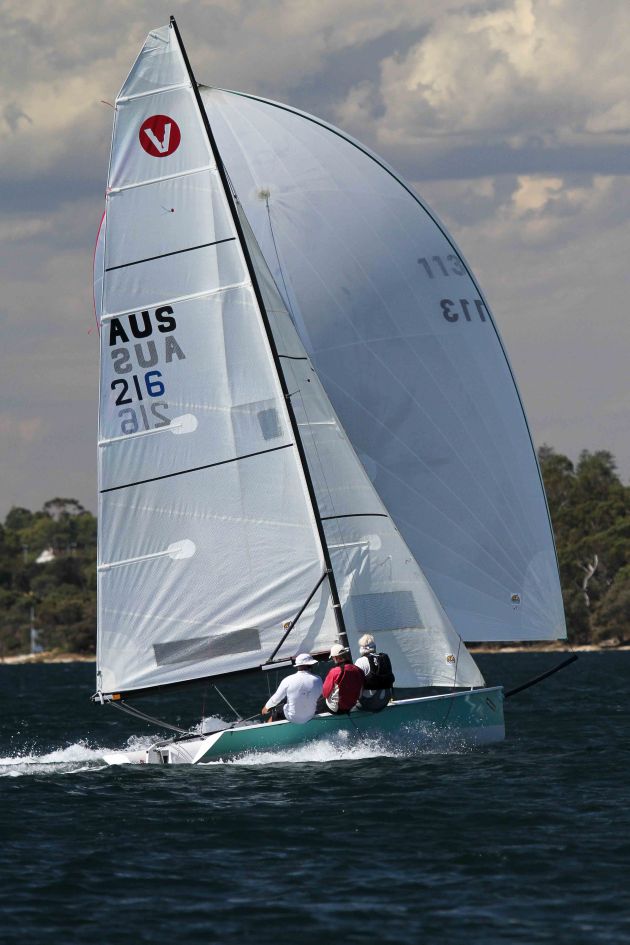 Rod Beurteaux has the Viper You Jump In the Bowl in perfect control on Blackwall Reach Photo Angela Kaaks.

Living up to its name, a thunderstorm rolled over Blackwall Reach a few minutes before start time last Saturday. The sea breeze kicked in with 15 to 18 knot gusty conditions which caught out many of the sports boats competing in East Fremantle Yacht Club’s annual Rumble on the Reach.

The first of three races degenerated into farce when runaway leader Whipper Snapper, a Thompson 7 sailed by Aaron Moore, inexplicably headed for the finish line with one lap still to sail. Predictably he was followed by another, leaving the field wide open for those who could actually read the course sheet. Graeme Monkhouse was the best of those, finishing first with Terry Foster’s Kiss My Asp close behind in second place.

There were no such issues in race two, but the breeze lifted appreciably and the leeward mark became a hotspot of drama as boat after boat capsized while trying to gybe in the gusty and shifty conditions. Foster was again well in the mix, recovering well from a knockdown to claim the win ahead of a fast finishing Nick Lewins in Fizz, making it another one-two result for the Vipers. Bruce Wilkinson’s Farr25 Turkish Delight was well placed with a lap to go when the headsail lost all its hanks and it limped to the finish line in fourth place.

In the final race, Chris O’Keefe shot out of the blocks and showed great downwind speed despite having a giant capsize in the previous race. He ran down the luckless Turkish delight, which had more gear issues, at the gybe mark in the final lap for a comfortable victory with Foster once again holding down second place, a performance which won him the overall prize for the regatta. The very consistent Howard Knight, sailing the Melges 24 Knitro finished second and third place was shared by Dean Picot’s Mild Oats and Graeme Monkhouse’s Hissteria.

This novel pursuit style regatta is run right in front of the East Fremantle Yacht Club, attracting a good crowd on the balcony and within the lounge. Unpredictable gusts on Blackwall Reach almost guarantee that there will be knock-downs aplenty, making it challenging for sailors and entertaining for spectators.