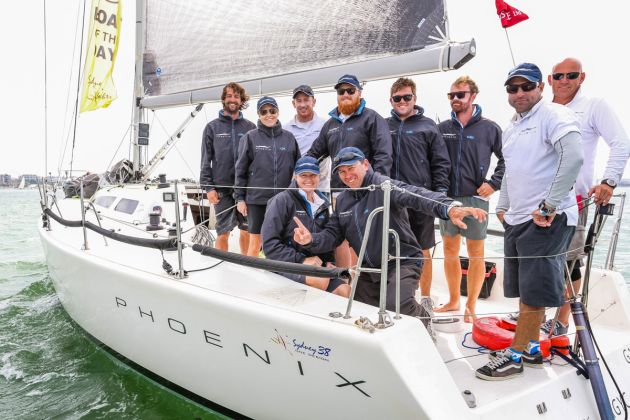 Australian champions in the VX One and Sydney 38 classes step up to the podium this evening after completing valiantly fought battles in both series which were conducted as part of the Royal Geelong Yacht Club’s Festival of Sails presented by Rex Gorell Land Rover.

It was an extraordinary turn of events for the VX One fleet contesting its final three races at the class’ third-ever national title in gusty 15-20 knots with the sea breeze constantly oscillating.

Rob Deussen’s The Beast had raced beautifully to hold a comfortable lead on the fleet. However three tough-to-swallow results and superb racing by Whitbread and Speedwagon’s Andrew York, completely turned around the top of the points table.

“We led around four out of the six weather marks, but we were slow downhill again,” Deussen said. “Those guys (Sticky Fingers) sailed really well and they deserve the win.”

Whitbread finally came out on top with a four point lead.  “We had a bad first race,” the skipper said. “We were last around the first top mark, prawned the kite and then took a gamble to the left which was opposite to everyone else, and sailed around the whole fleet.  We had a massive lead in the second race and stuffed it up, then in the last race we dominated.”

McDonald had the job of calling the shifts and the new national champion quipped: “Joel’s the engine and I am just the monkey on the tiller.”

The Beast finished second on a countback from York.

The unofficial VX One Sailor of the Regatta goes to Patrick Roos, the 12 year-old ‘middle man’ who raced on the Canberra Yacht Club entry, Weapon of Choice. Roos normally races Optimists, but when skipper Fred Kasparek asked him to join the crew, there was no hesitation.  “It was awesome!” Patrick said at the end of the series.

For a small but quality fleet of these one-design sports boats, the spread of states represented was very broad: Western Australia, Queensland, New South Wales, Victoria and the ACT.

So tight is the timeless one design class that Phoenix’s Brenton and Jen Carnell and their crew went into the closing day, Monday January 25, 2016, needing to achieve consistent top two results to hold onto their overall lead and successfully defend their national title.

Walking away with a dominant final day performance was a superb achievement the skipper attributes to a combination of good boat speed and a tight-knit crew.

“The Phoenix was very fast today in the building breeze that went from 12 to about 17 knots. We were climbing all the time over the top of everybody, also, the crew were just so focused. They got the rig settings right and they spent so much time setting up the boat properly to race in these conditions.”

Carnell also said his tactician, 23 year-old Tasmanian sailor, Chris Jones, was outstanding. “He is certainly the rock star of the day. He’s cool and calm. I saw him at 20 and thought, ‘man, this kid has got something special’. He has helped us to achieve back-to-back national championships.”