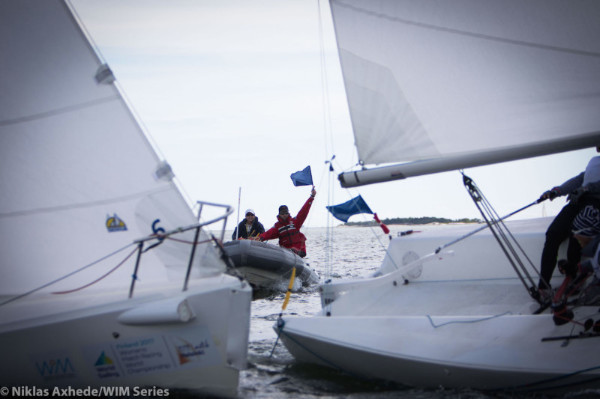 The battle for the final spots in the quarterfinals came down to the last flight at the 2017 Women’s Match Racing World Championship in Helsinki, Finland. Eight of the top teams in the world will move on to the second stage and keep their dreams of a World Championship title alive while six teams had their hopes defeated.  Lucy Macgregor (GBR) put an exclamation point on her team’s round robin by winning all of her matches today and remaining undefeated.

As the last flights played out in the bright sunshine in front of the evening crowds on the terrace of Hernesaaren Ranta, the final two spots were still to be decided. The most exciting of the late matches featured two Finnish teams skippered by Marinella Laaksonen and Antonia Degerlund.  During a tacking duel on the second upwind leg, Degerlund’s main trimmer slipped overboard while tacking. She hung on to the mainsheet, but while the others recovered her, Laaksonen was able to slip away to an insurmountable lead. “Although we are disappointed for our team, we are very happy that our training partners, Marinella and her team, qualified through to the quarter-finals with her win over us,” Degerlund confided at the end of the day.

As the winner of the round robin stage, Lucy Macgregor (GBR) gets two significant “prizes”. She will be presented with the ISAF / World Sailing Nucci Novi Ceppellini Memorial Trophy. The trophy is named after Nucci Novi Ceppellini, ISAF Vice-President from 1998-2008, who passed away in February 2008 after many years dedicated to the sport, with women's match racing one of her particular passions. In addition, she gets the opportunity to choose her opponent for the quarter-finals. When pressed by Liz Baylis, WIM Series Manager, during the after race “Sailor Talk Show” to reveal her choice, Macgregor responded: “You’ll have to wait until the morning. Our team has to sit down with a cup of tea and a biscuit and have a chat about it tonight!”

The weather in Helsinki has been a rollercoaster over the past few days – bright sunshine then blustery clouds then brilliant sun again. “Welcome to Finnish summer!” joked Mats Welin, Commodore of Nyländska Jaktklubben (NJK), the host yacht club of this year’s World Championship.

Tomorrow evening the sailors and officials will be treated to a special evening at Blekholmen, the historic clubhouse of NJK on a beautiful island in the middle of the harbour with stunning views of Helsinki.


Results in the 2017 Women’s Match Racing World Championship, the first event of the 2017 WIM Series, at the end of Stage One (skipper, nationality, wins – losses, winning percentages):

The racing continues Tuesday with the quarter-finals on the waters at Hernesaari (Ärtholmen), to be followed by the semi-finals and then concludes with the final on the longest day of the year, Wednesday 21 June.