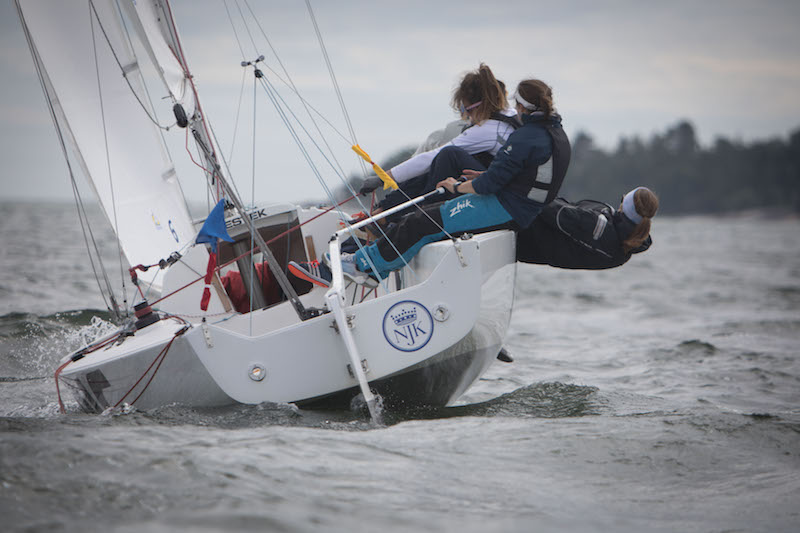 Despite a long day on the water in blustery conditions, 2010 Women’s Match Racing World Champion Lucy Macgregor (GBR) was quite upbeat about her team’s performance and their placement on the top of the standing after two days of racing in the 2017 Women’s Match Racing World Championship in Helsinki.  “It’s been a really long day and we’re all pretty tired, but happy to have finished the day off strong with a good scorecard” commented a tired Macgregor.

Unlike the first day that saw bright sunshine and very light winds, day two dawned with clouds and cold south winds. But to the delight of the race committee the cold winds were from a steady direction. With good winds the Principal Race Officer, Annika Ekman (SWE), and Course Race Officer, Timo Mustakallio (FIN), ran thirteen flights – sixty-nine races – while on the water for over ten hours. “We were very happy to have this team of mark layers with great passion to always keep their marks in a good position despite the long hours on the water”, complimented Ekman at the end of the day.

Macgregor and her team, Team Mac, were also on the water for nine of those flights and she complimented her teammates: “The communication within the team is working really well. We’ve got some really naturally talented sailors on board, which makes a huge difference. And although we are match racing, at the end of the day it’s just a boat race and it’s just about being quick and going the right way and controlling the other boat. And I’m really happy with how the team is sailing together.” Macgregor’s tactician is local sailing hero, Silja (Lehtinen) Frost (FIN) – the 2013 Women’s Match Racing World Champion.

One of Macgregor’s matches was with defending World Champion, Team Anna. Skipper Anna Östling (SWE) described the racing as “really close, exciting and fun” despite losing the close match.

Large crowds are expected tomorrow evening as the racing will be center stage as the afterwork featured entertainment at the outdoor restaurants and terraces of Hernesaaren Ranta.

The racing continues Sunday with the round-robin on the waters at Hernesaari (Ärtholmen), to be followed by quarterfinals, semi finals and then the conclusion with the final on the longest day of the year, Wednesday 21 June.