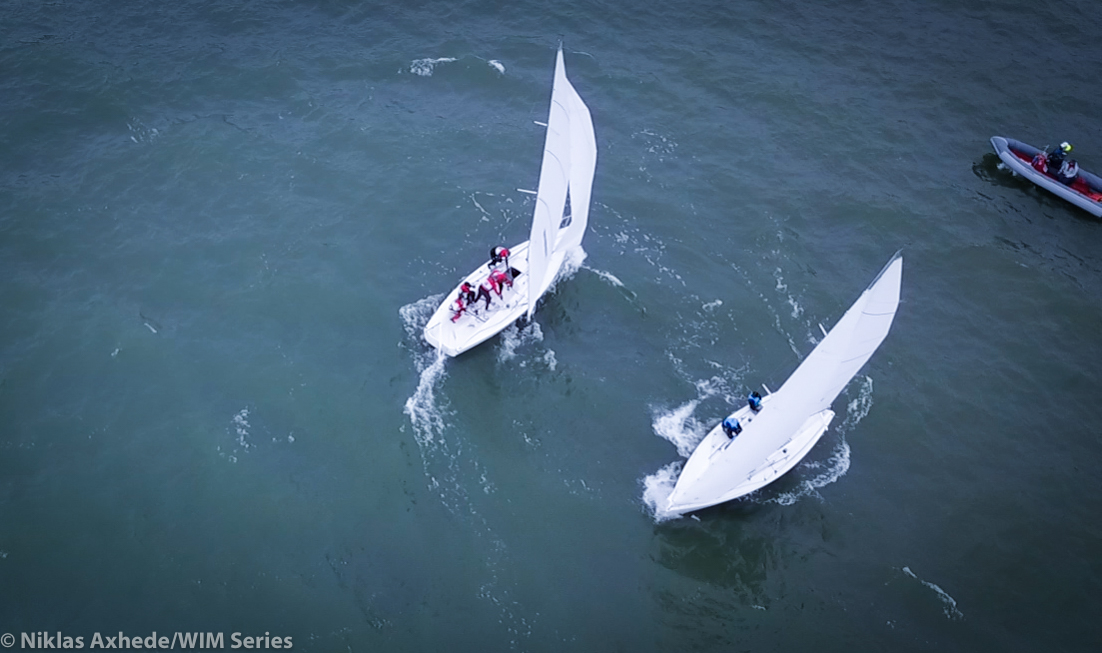 Before thunderstorms abruptly ended the racing in Helsinki, there were some exciting matches in the Quarter-Finals of the 2017 Women’s Match Racing World Championship. The results went “according to form” as the top four from the round robin stage came out on top in each of their pairs.

Renée Groeneveld (NED) and her Dutch Match Racing Team met local sailor Marinella Laaksonen (FIN) and her L2 Match Racing Team in the first Quarter-Final match. “We had really good speed and crew work today. With the puffy breeze this morning it was really important to be in the strong winds and we did a really good job with that,” reacted Groeneveld as she waited on shore for the conclusion of the other matches after winning their match 3 – 0.

Defending Champion, Anna Östling (SWE), had a good feeling about today’s races against the second Finnish team in the Quarter-Finals, Mikaela Fors (FIN) and her Pen & Hammer Sailing Team, which Team Anna won 3 – 0: “We are very happy with our day. We had some fun, tight races.  We misjudged the timing on the first start and the light and choppy conditions gave Mikaela an opportunity to pass, but it was a fun race. After that, we were very happy with our starts.”

In the third pair of the Quarter-Finals, Trine Palludan (DEN) and her Team Experience used some of their years of experience to fight off a very competitive Pauline Courtois (FRA) and her Match in Pink by Normandy Elite Team, winning 3 – 1. The starts were very exciting with lots of cat and mouse activity as the teams fought for the favoured right hand side of the race course. “We had very good speed and our spinnaker handling was very good, so we could extend on all of the downwind legs.  We were able to come from behind with our better speed and extend enough to get rid of our penalty and still lead,” noted Palludan when asked how she overcame and early penalty in her third match.

When the final pair hit the water for their matches, the weather had changed and the sun shown brightly and the breeze increased to a steady fifteen knots. Round robin winner, Lucy Macgregor (GBR) earned the right to choose her opponent and chose Caroline Sylvan (SWE) who finished eighth in the round robin. Macgregor praised her team: “The girls are doing a great job and we’ve had really good starts which allow us to get ahead and stay ahead.”

After the Quarter-Finals were completed, the four Semi-Final skippers came ashore to do the draw for the next stage. Macgregor again earned the right to choose her opponent and selected Östling to the surprise of some. When asked about Macgregor’s choice, Östling responded: “I didn't see it coming. Being chosen definitely lights something inside of us. Super focused. Look forward to a good semi. We didn’t perform our best in the round robin against Lucy, so looking forward to tomorrow. We know we can do better. We’re super focused.”

The teams went to their boats and joined the race committee on the water to begin the Semi-Final matches. But before they could start, the weather took an abrupt turn and thunderstorms developed in the surrounding area prompting the organizers to call an end to the day and send everyone ashore.

This evening the sailors and officials will be treated to a special evening at Blekholmen, the historic clubhouse of NJK on a beautiful island in the middle of the harbour with stunning views of Helsinki.

The longest day of the year, Wednesday 21 June, will see the conclusion of the 2017 Women’s Match Racing World Championship with the Semi=Finals and Finals on the waters at Hernesaari (Ärtholmen).