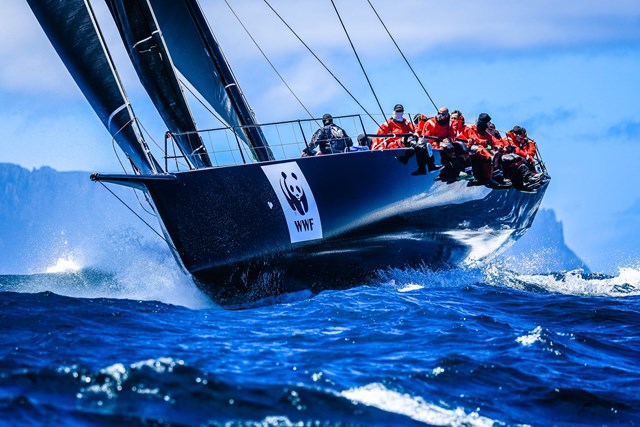 No sooner had the fight for line honours in the 2021 Rolex Sydney Hobart Yacht Race been won and lost by the three 100-footers in the race early this morning, attention turned towards the main event – that being, the race for overall victory and the prestigious Tattersall Cup.

While the owners, crews and staff of the front-running big boats were well into celebrating or commiserating their fate in the Cruising Yacht Club of Australia’s 628 nautical mile event, in their wake was a fleet scrapping for their place on Division and ultimately their overall place.

The Tattersall Cup, awarded to the boat that finishes first on corrected time, is the most prestigious award for the race, notwithstanding the broad appeal of the line honours race.

First to finish and take line honours for the J. H. Illingworth Cup was Peter Harburg’s Black Jack that crossed the line at 1.37am in a time of 2 days 12 hours 37 minutes 17 seconds.

The next boat to finish at 3.22pm and take fourth place on line honours after challenging the 100-footers early was the Botin 80 Stefan Racing, skippered by co-owner Grant Wharington.

The JV62 Whisper was the next boat due to finish on line honours in fifth place. As the boat neared the finish line, a strong south-westerly was blowing at 20 knots on the Derwent River.

The race fleet dropped by one at 1pm with confirmation that the Beneteau 473 Wonderland, owned and skippered by Rebecca Connor, had withdrawn due to equipment issues.

Wonderland, registered with the Newcastle Cruising Yacht Club in NSW and in her second Rolex Sydney Hobart, was this afternoon heading to Bermagui on NSW south coast.

Wonderland’s retirement meant that the race now had 37 retirements, three finishers and 48 boats still sailing, of which 10 are racing in the Two-Handed division.

The overall standings were shifting a lot this afternoon, and will probably continue to do so.

But at 3pm, leading overall was Shane Kearns’ White Bay 6 Azzurro that was 27 nautical miles east of Flinders Island. It has been in the fray since the race began on Boxing day.

Other overall contenders in the fray included Ichi Ban and Celestial, two TP52 entrants that were separated by only 400m as they charged up the Derwent River in a mighty tussle.

Trailing at the back of the reduced fleet was the Army Sailing Club entrant, Gun Runner that had just passed Eden on the NSW south coast and 10 nautical miles north-east of Green Cape.

To follow the race and for all information, please go to: http://rolexsydneyhobart.com/