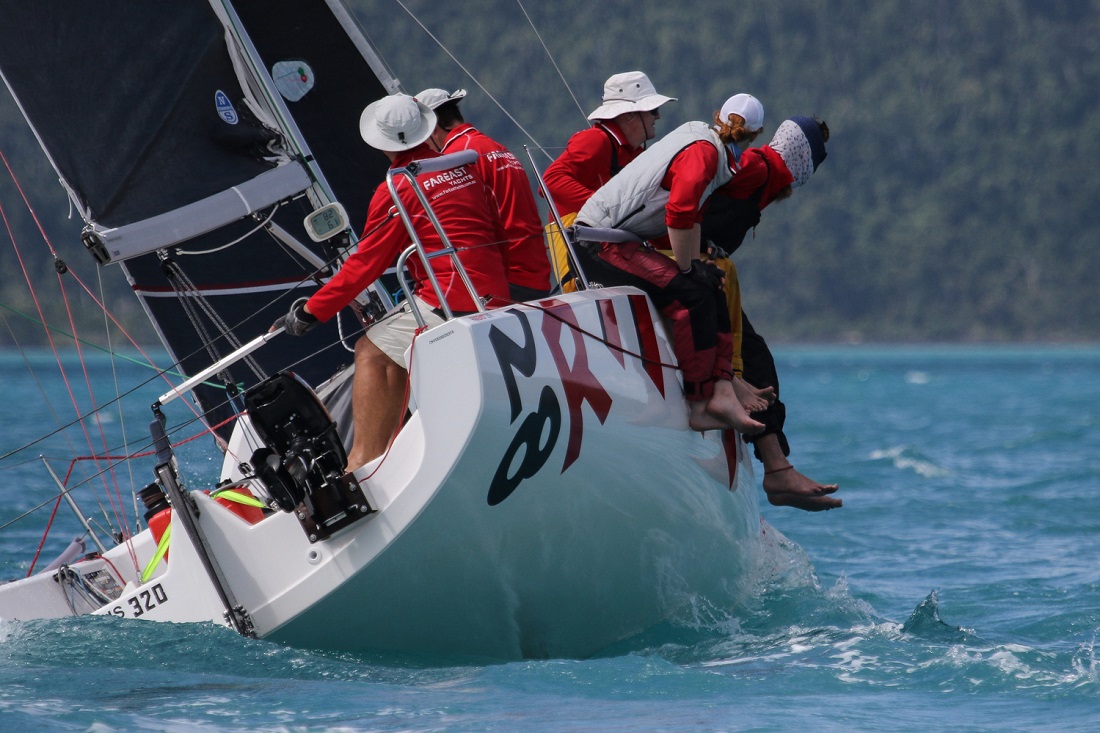 The 31st running of Airlie Beach Race Week has come to a close late this afternoon and all winners and placegetters will be feted at the official prize giving at Whitsunday Sailing Club this evening.

Blackmore commented after racing, “I have fond memories of Airlie Beach – I started here at Whitsunday Fun Race years and years ago.

“Today came down to the last race – if we finished in front, we won – if he won the final race, they won. Gordon (Ketelbey) said to me at the beginning of week, ‘looks like we’ll have good racing this week’. He was right. They sailed so well. Upwind they are right on our hammer, all over us.

“The organisers did a good job of it and the weather was fantastic – and it doesn’t hurt to win. It’s been a great week and the courses were good.”

Gerrit Veenemans saved the best until last, steering his Fareast design ‘Fareast 28R’ to second place in the final race to claim the Performance Racing division. The Queenslander won the division on countback to Tim Cummings’ Kraken, a Melges 24 from Lake Macquarie, which won the race.

As Veenemans explained, “We had more wins on the scorecard than them. It was a great week and the Kraken boys did really well. We thought they would win; they deserved to.

“Goggles (aka Justin Ruckert) does a great job too; he’s good to compete against,” Veenemans said of Mister Magoo’s owner who was fifth this year, but has won in the past.

“We had some lovely downwind runs, especially the last two days in good breeze. The first two days difficult in light, a bit of a lotter fell into a couple wind holes.

“We had a lovely week. It’s great to be back and I hope to be back next year. It’s a lovely regatta and you don’t get better competition than in this division,” he ended.

Luke Ratcliff, his brother Paul, Paul’s son William and Geoff Williams were able to maintain their winning streak today. Winning all three of yesterday’s windward/leeward races with RE-Heat (NSW) gave the four the momentum to keep on keeping on – all the way to the top of the overall leaderboard.

Andrew Wiklund’s Crank (Qld) finished second in the day’s race, but it was the consistently well-sailed The Stig (Malcolm Dean, NSW) that finished second overall, four points adrift of RE-Heat.

Tanya Kelly and her Spartan crew won a very competitive Cruising Division 2. The Queensland yachtswoman drove her Beneteau First 34.7 to its first win this afternoon, but had sailed consistently throughout, to claim the overall prize.

“We are very happy to be here. We learnt a lot about current and tide this week – and staying out of them,” Kelly said. “We certainly spent a lot of time optimising new sails and how to get good height out of them.

“This is the first time we’ve done Airlie Beach Race Week; it’s been a fantastic regatta. We’ve really enjoyed the courses. There has been a good mix of passage and windward/leeward races. We had one race where our strategy didn’t pay off, but the rest were good. We kept looking for max speed downwind.”

Kelly continued, “I have a lovely team of eight sailors who have been amazing this week. We pushed hard. I feel when I am on the boat there are eight people working hard, not just me. We’re definitely looking forward to coming back and we want to say a big thank you to the race committee on doing such a great job.”

We take this opportunity to thank all those involved with Airlie Beach Race Week Festival of Sailing, particularly the multitude of volunteers who arrive each year to help make this event the success it is.