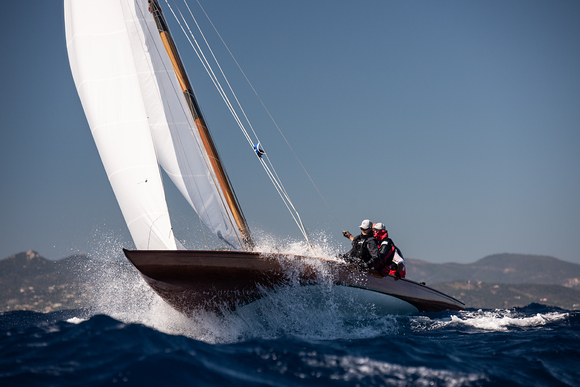 In two months’ time, some of the most striking boats from the classic yachting circuit will gather once more on the Cote d'Azur for the 9th edition of the Gstaad Yacht Club Centenary Trophy.

It seems only recently that the Swiss Club launched the idea of an event dedicated to boats 100 years or more old, but the Gstaad Yacht Club Centenary Trophy will celebrate its ninth anniversary this year in Saint-Tropez, the regatta having become a true tradition and an unmissable rendezvous for these sailing beauties.

As past winners and participants keep coming back for more, year after year new centenarian yachts make their debut at the Trophy.

The provisional entry list includes, in fact, several rookies such as 1918 Apache, an 8 Metre IR designed by Norwegian architect Johan Anker. He is known worldwide as the father of the Dragon, the boat that maintained Olympic class status longer than any other boat.

Of Scottish origins is another newcomer; Endrick, a 7 Metres IR designed by William Fife III in 1912. Her owner and skipper is Swiss Olympic sailor, Jean Degaudenzi, who took part to the 1972 Games in Munich in the Flying Dutchman class.

From the same drawing board comes Sayonara, Japanese for ‘goodbye’. Designed as a fast cruising yawl by William Fife III of Fairlie in Scotland, and built in Australia in 1897, she was one of the fastest racing yachts of the time, winning several regattas and holding passage records.

Olympian, the William Gardner designed gaff cutter from 1913 skippered by French America's Cup veteran Bruno Troublé, will be back to defend the title won in 2014. Other past winners, including Tilly XV, double champion in 2017 and 2018, confirmed they will be on the starting line.

The Centenary Trophy features an especially created and constantly refined handicap system, allowing very different boats in size and rig to compete on equal terms. Its format has proved extremely attractive for the sailors and the public alike, with the first boat to cross the line off the Saint Tropez breakwater to be declared the winner.

This year too, during the prize-giving night, both the Centenary Trophy and the Centenarian Award Silver Bowl will be on display.