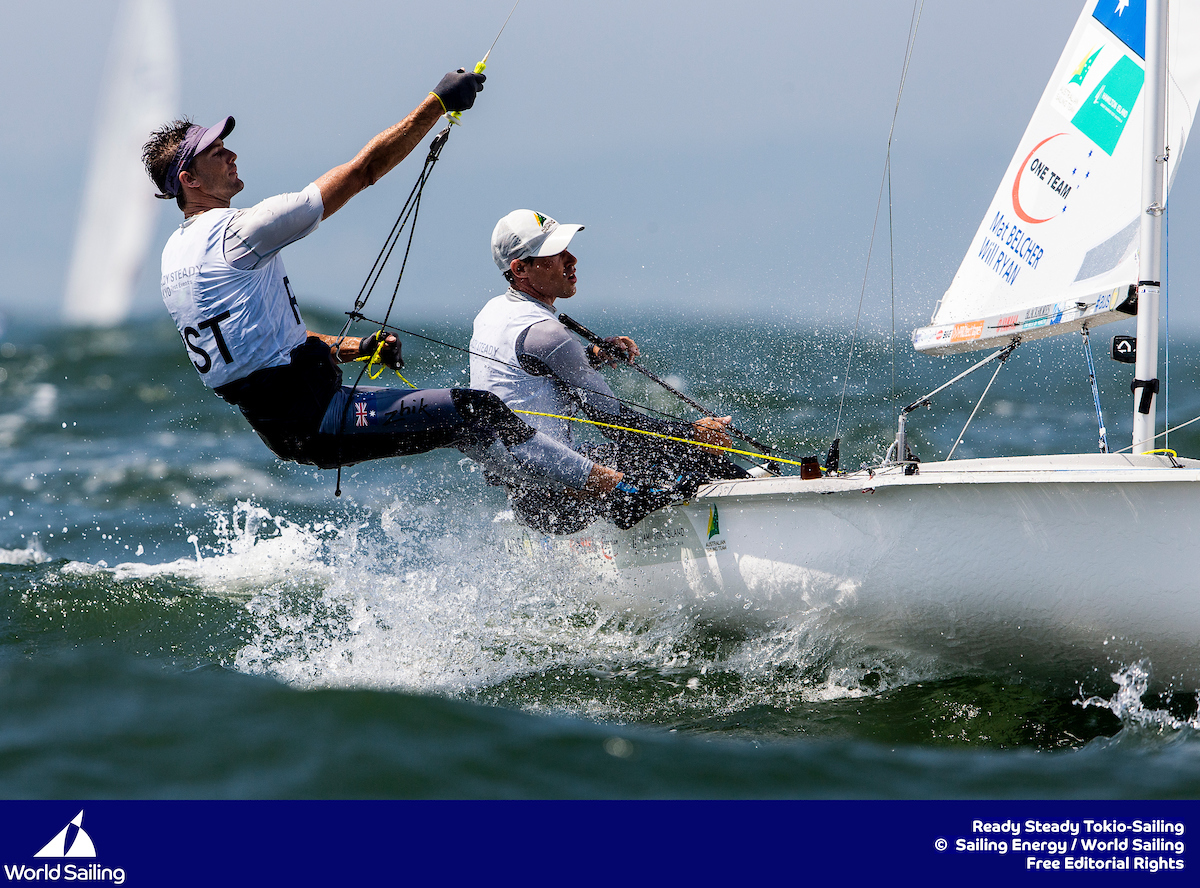 Mat Becler and Will Ryan in form - Sailing Energy pic

The official test event of Tokyo 2020, Ready Steady Tokyo – Sailing, got underway in Enoshima, Japan today with the first day of racing, and the 363 sailors from 47 nations were met with strong winds and big waves, an ideal way to start the six days of competition.

The 470s held both the Men’s and Women’s World Championships on these very waters just last week, meaning their sailors will by now be very familiar with the conditions in Enoshima.

One team who certainly enjoy sailing here are Jordi Xammar/Nicolas Rodriguez (ESP) in the 22-strong 470 Men’s fleet. After finishing runners-up to the 2019 title, the Spaniards have made an electric start to Ready Steady Tokyo, winning both races on the opening day.

Although they recognise it’s only Day One, the Spaniards could not hide how much they relish competing at this venue: “Enoshima already produced very good conditions at the Worlds, and today it was perfect – 15 knots and big waves,” Xammar commented.

“We had really good starts and good upwind and downwind speed. It’s just the first day and there is plenty to go, but we’re very happy with the feeling so far. For sure we know about sailing here, but so do our competitors, so at the end it’s the same for everyone,” added Rodriguez.

A similar scenario is unfolding in the 20-boat Women’s fleet, where Worlds silver medallists, Ai Kondo Yoshida/Miho Yoshioka (JPN), currently lead after two races with a second and a first.

The athlete with the best start after three races is Yunxiu Lu (CHN) in the 20-board RS:X Women’s fleet. She won two races and came second in the other. Lu and her team have been training here ahead of Ready Steady Tokyo, in a variety of conditions, which has translated into early success on the water.

“Today was good, but also quite hard,” Lu assessed. “The waves and the wind were quite strong. It’s really interesting to sail here – when I arrived, for around 15 days there was no wind, then we had another 15 days of strong wind!

Her teammate, and last year’s World Cup Series Enoshima winner, Peina Chen, is also involved at Ready Steady Tokyo, as they both vie for that coveted Tokyo 2020 spot.

“For us, this event is for training and to see if we can find any problems, so it’s very useful,” Lu said.

Tied on points in second and third respectively are Maja Dziarnowska (POL), who picked up the day’s third race win, and Emma Wilson (GBR).

In contrast, wins were split between three athletes in the 24-man RS:X Men’s fleet, as Kiran Badloe (NED), Tom Squires (GBR) and Thomas Goyard (FRA) all picked up victories. After a shaky 11th place in Race 1, Goyard followed his win with a second place to sit top overall so far. Squires and Mattia Camboni (ITA) follow to complete the top three.

In the 49er fleet, where 21 teams are competing, reigning Olympic champions Peter Burling/Blair Tuke (NZL) have made an ideal start to the test event, sitting first overall after winning two out of three races.

The British Sailing Team is also performing well in the 49erFX, with Charlotte Dobson/Saskia Tidey topping the 23-strong fleet.

Over in the Finn fleet, where 22 sailors are competing, the early favourites have started well. The 2018 world champion and 2019 European runner-up, Zsombor Berecz (HUN), impressed with a third and a win.

He leads 2018 World Cup Series Enoshima winner Nicholas Heiner (NED), who was consistent with two seconds, and European champion Giles Scott (GBR), who won the first race but finished sixth in the next.

A first and a second for Sam Meech (NZL) puts him as the early leader in the 35-strong Laser fleet. He is two points ahead of Matt Wearn (AUS) and Jean Baptiste Bernaz (FRA), who are tied on six points in second and third respectively.

Hermann Tomasgaard (NOR) clinched the other race win of the day, but combines that with a ninth to put him fourth overall.

Maria Erdi (HUN) leads the way in the 40-boat Laser Radial fleet with a first and a second.
Last year’s World Cup Series Enoshima winner Marit Bouwmeester (NED) follows her, with 2019 world champion Anne-Marie Rindom (DEN) in third, having won the second race of the day.

Racing continues tomorrow at 12:00 local time on Sunday 18 August. The RS:X Men/Women, 49er, 49erFX and Nacra 17 fleets are scheduled to sail another three races, with the remaining fleet set to complete two.